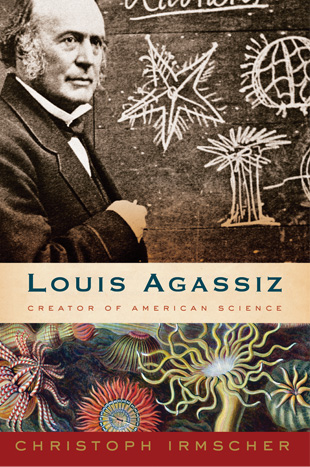 HOUGHTON MIFFLIN HARCOURT, FEBRUARY 2013The paleontologist and zoologist Louis Agassiz (1807–1873) is sometimes blamed for having delayed the acceptance of Darwinism in American scientific circles by at least a decade. His stubborn racism, which he shared with many of his contemporaries but expressed more publicly than most, has further tarnished his image. In his own time, however, his popularity transcended class as well as regional boundaries. He was a cultural and scientific icon.

In the words of one of Agassiz’s admirers, American literary critic Edwin Percy Whipple, no strange living thing was caught in wood or river, no mysterious rock unearthed “that was not sent to him as the one man in the country that could explain it.” Visitors to Agassiz’s house...

When the word was out that Agassiz wanted turtles, the citizens delivered. Henry David Thoreau sent a Blanding’s turtle from Walden Pond. And one early Sunday morning a school principal named John Whipple Potter Jenks from Middleborough, Massachusetts, harvested some fresh turtle eggs for Agassiz and, using his horse to intercept a freight train, delivered the precious cargo within 3 hours to Agassiz’s doorstep. Today, an  embryo Agassiz pulled from a turtle egg is at the Harvard Museum of Natural History, which Agassiz founded, drifting quietly in its alcohol-filled jar—a pickled monument to the zeal that got it there in the first place.

Agassiz’s undaunted turtle-deliverer, braving the odds as if he were the Paul Revere of natural history carrying a message to the patriot troops, wasn’t an isolated phenomenon. Agassiz’s acquisitiveness energized an entire country. When he publicly solicited specimens for a (never-completed) Natural History of the Fishes of the United States of America, amateur collectors from all over the nation rose to the challenge, proud to be recognized as members of the national family of science Agassiz was assembling. Soon there were more specimens than any institution could ever hope to contain. “My museum overflows from garret to cellar,” sighed Agassiz.

In his books, at least, the animals posed compliantly for their portraits. Agassiz’s assistant, the immensely talented Henry James Clark, got very good at drawing turtle embryos while peering at them through his microscope. And his lithographer Antoine Sonrel created stunning plates from those drawings, rendering the minutest details with photographic precision. It was left to Agassiz’s friend Ralph Waldo Emerson to point out the obvious: if no one stopped him, Agassiz would empty the Charles River of turtles. Tongue-in-cheek, Emerson suggested that the turtles of Cambridge hold a public “indignation meeting” and then parade through the streets, led by Chelydra serpentina (the common snapping turtle), with “‘Death to Agassiz!’ inscribed on their shields.”

It is easy to laugh today about Agassiz’s childlike greed for more and more specimens, just as it is deeply painful to remember his racist views. But as we continue to worry about the relationship between scientists and a science-weary public, it seems worth remembering that, a century and a half ago, Louis Agassiz got thousands of his fellow citizens invested in doing science, encouraging them to go outdoors to, in his own words, “catch nature in the act.” Those were the days when Fanny Longfellow, the poet’s wife, would pick up, for her own reading pleasure, one of Agassiz’s hefty tomes. With armies of beautiful turtles drifting before her dreaming eyes, she realized that, enjoying her “shell” as much as she did, she rather wanted to be one of them, too.

Christoph Irmscher is a professor of English at Indiana University and the editor of The Library of America’s John James Audubon: Writings and Drawings. Read an excerpt of Louis Agassiz: Creator of American Science.