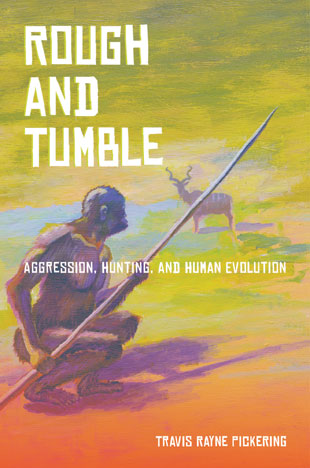 UNIVERSITY OF CALIFORNIA PRESS, APRIL 2013From massacres of schoolchildren to terrorist detonations to garden-variety homicides, human violence looms omnipresent in many awful shades. But we need only look to one of our closest primate cousins to understand that we are not alone in our propensity for carnage. Like humans, chimpanzees also rape, murder, and even wage rudimentary war.

In the last 20 years, primatologists, rightly impressed by the genetic closeness and behavioral continuities between “us and them,” have resurrected the old idea (albeit now clothed in more sophisticated terms) of our emergence from “killer-ape” ancestors.  But even though there is no question of the heuristic value of primate models, if employed to the exclusion of other data, they can never yield sufficient scenarios of human evolution. This is because our ancient human forebears left behind a rich archaeological record of their activities—a record that cannot be ignored...

My book Rough and Tumble appreciates the vital role of primate ethology for elucidating our past. But it also acknowledges the vast and largely untapped contribution that archaeology can make to understanding the extent to which our ancestors’ violent inclinations might have driven human evolution.

With minor variations, the opinions of diverse specialists converge on the same hypothesis: that hunting was a primary factor in our ancestors’ evolutionary success. Hunting facilitated the first human migrations out of Africa and into less-generous lands, where year-round vegetable foods were unavailable. Hunting also probably underlies our unique social dynamics, including a sexual division of labor, with hunting men and gathering women who live in extended, food-sharing groups. The central role of meat in the human diet meant our forebears’ concomitant dependence on carcasses large enough to sustain them and to facilitate complex distribution of protein to all group members. The earliest archaeological record, composed of stone cutting tools and butchered bones of large ungulates, supports the proposition that prehistoric humans hunted big game on a regular basis.

A sole reliance on the observations of nonhuman primates would never have revealed these important elements of our evolutionary history. Male chimpanzees kill animals that are smaller than those whose bones populate the archaeological record, and chimpanzees share meat only reluctantly, in order to consolidate political alliances or in trade for sexual favors from females. Another important distinction between chimpanzees and humans is that the former are super-athletic, using mainly their bodies and teeth to chase, capture, and dispatch prey with agility and fury. In contrast, our early human ancestors—small-bodied, blunt-toothed, and slow-footed—were outmatched by the large, fleet animals that archaeologists deduce they killed and ate.

Humans, as relatively feeble predators, needed weapons to close the gap between them and their imposing prey. My book presents data that indicate humans may have hunted with spears as long as 2 million years ago. I posit that successful spear hunting was predicated on emotional control, and also review various lines of evidence—psychological, osteological, and behavioral—that, when combined, indicate humans possessed this kind of emotional control by that same 2-million-years-ago mark. This all suggests that the old, but influential, concept that our ancestors were killer apes, who acted with undifferentiated aggression in both hunting and interpersonal conflict, is a canard.

I don’t believe that pacifism is the default moral position in every relevant circumstance (knowing what we now know, what “good” person transported back to late 1932 would, given the chance, resist slitting Hitler’s throat?). But modern human society definitively has a problem with aggression on many levels, from simple interpersonal conflict to full-blown warfare. The point is, appreciating and confronting this challenge, while essential to advancing the quality of human existence, does nothing to elucidate the origins of that existence. That task is in the hard work of piecing together all the clues that nature provides us, including not just the behavior of our living primate relatives but also the material record of our own unique past.