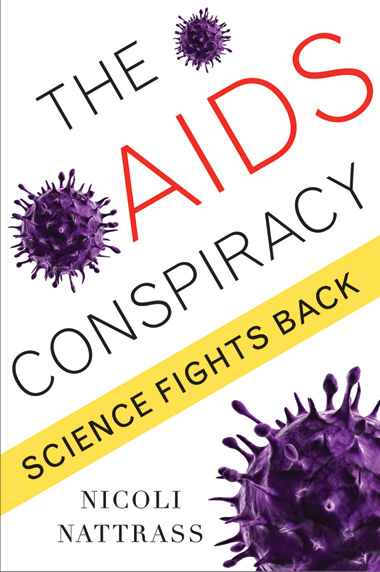 There is a substantial body of evidence showing that HIV causes AIDS—and that antiretroviral treatment (ART) has turned the viral infection from a death sentence into a chronic disease.[1. PA Volberding and SG Deeks, "Antiretroviral therapy and management of HIV infection," Lancet, 376: 49-62, 2010] Yet a small group of AIDS denialists keeps alive the conspiratorial argument that ART is harmful and that HIV science has been corrupted by commercial interests. Unfortunately, AIDS denialists have had a disproportionate effect on efforts to stem the AIDS epidemic. In 2000, South African President Thabo Mbeki took these claims seriously, opting to debate the issue, thus delaying the introduction of ART into the South African public health sector. At least 330,000 South Africans died unnecessarily as a result.[2. P Chigwedere, et. al., "Estimating the lost benefits of antiretroviral drug use in South Africa," JAIDS, 49:410-15,...

The “hero scientist” of AIDS denialism, University of California, Berkeley, virologist Peter Duesberg, argues that HIV is a harmless passenger virus and that ART is toxic, even a cause of AIDS. He has done no clinical research on HIV and ignores the many rebuttals of his claims in the scientific literature.[3. P Chigwedere and M. Essex, "AIDS denialism and public health practice," AIDS Behav, 14:237-47, 2010],[4. N Nattrass, "Defending the boundaries of science: AIDS denialism, peer review and the Medical Hypotheses saga," Soc Health Ill, 33:507-21, 2011] As I describe in my new book, The AIDS Conspiracy: Science Fights Back, this has prompted further direct action against Duesberg by the pro-science community.

In 1993, John Maddox, then editor of Nature, complained that Duesberg was “wrongly using tendentious arguments to confuse understanding of AIDS,” and that because he was not engaging as a scientist, he would no longer be granted an automatic “right of reply.” More recently, in 2009, AIDS activists and HIV scientists, including Nobel Laureate Françoise Barré-Sinoussi, complained to Elsevier, the publisher of Medical Hypotheses, when that journal published a paper by Duesberg defending Mbeki and denying the existence of the African AIDS epidemic. Medical Hypotheses had a policy against peer review, so Elsevier asked the Lancet to oversee a peer review of the paper. When the panel of reviewers unanimously recommended rejection, Elsevier permanently withdrew it and forced Medical Hypotheses to introduce peer review. Last December Duesberg published a reworked version in an Italian journal,[6. PH. Duesberg, et. al., "AIDS since 1984: No evidence for a new, viral epidemic–not even in Africa," Ital J Anat Embryol, 116:73–92, 2011] sparking further controversy and protests from the journal’s editorial board, one of whom has already resigned.

Efforts by scientists to defend science are supplemented by pro-science activists operating on the Internet. Physician, author, and blogger Ben Goldacre argued in his Guardian column Bad Science that a “ragged band of bloggers from all walks of life” has been very successful at exposing pseudoscientific claims and fraudulent alternative practitioners selling quack cures. The Internet now poses a double-edged sword for AIDS denialists. It is becoming a tougher place for people to sequester themselves in a comfortable cocoon of the like-minded. While the web allows denialists to advertise their ideas and build networks, it also exposes potential converts to scientific rebuttals of their claims, as well news about the deaths of the “living icons”—high-profile HIV-positive people who rejected ART.

The key living icon for AIDS denialism was Christine Maggiore. She founded Alive & Well AIDS Alternatives (an organization with Duesberg on its board), campaigned against the use of ART to prevent mothers passing HIV to their babies, and met President Mbeki. Despite her 3-year-old daughter’s succumbing to AIDS, Maggiore remained staunchly opposed to HIV science and ART. She opted for alternative therapies and died at the age of 52, from AIDS-related infections.

Scientists often have a tough time responding to antiscience conspiracy theories because their integrity is impugned by the conspiratorial moves made against them. But precisely because living icons like Maggiore lent credence to AIDS denialism by appearing to offer “living proof” that the science of HIV pathogenesis and treatment is wrong, pro-science activists maintain a list of denialists who have died of AIDS. The weapons of science and reason are still very much in contention, but the gloves have come off in a broader struggle over credibility.

Nicoli Nattrass is director of the AIDS and Society Research Unit at the University of Cape Town and visiting professor at Yale University. Her research on the economics and politics of antiretroviral treatment helped change South African AIDS policy. Read an excerpt of The AIDS Conspiracy.