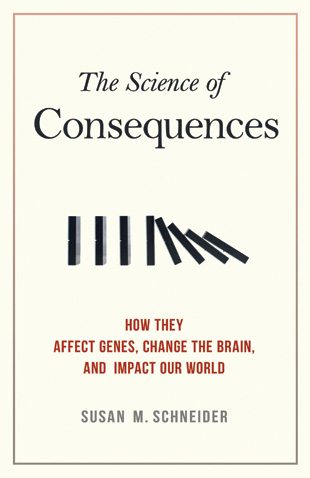 Nature versus nurture died a long time ago, for those who were paying attention. In its place has risen an enormous hodgepodge of nature-and-nurture variables at all levels, from subcellular to societal, interacting in nonlinear, go-figure-this-one-out fashion. Especially exciting is the discovery of the degree of plasticity that this nature-nurture interplay involves and enables. The role played by consequences is a big part of that story.

Consequences result from behaviors—and in turn drive those behaviors. Long ago, primitive invertebrates developed the capacity to learn from their successes and failures. It’s been suggested that this game-changing ability may have helped bring about the rapid expansion in the biodiversity of multicellular organisms known as the Cambrian explosion. If that indeed happened, what a dramatic illustration of the power of learning from consequences to reshape biology. As it is, the evolved ability to...

Consequences abound in our own industrialized lives as well as in the lives of wild birds and bears. Whenever we weigh a decision, we’re vetting different consequences. Small-scale or large, immediate or delayed, positive or negative, it’s hard to overestimate their influence.

Some of the science that makes sense of the workings of consequences has been hidden in plain sight for generations. Different “schedules of consequences” turn out to produce orderly behavioral patterns across many different species and behaviors, for example. The analysis of how signals for consequences work (stopping at a red light, say) has produced its own set of elegant principles, culminating in signal-detection theory. Indeed, even what we choose to observe is a function of past and anticipated consequences: the “ostrich effect” (hiding our heads in the sand) results when we refuse to face an experience that could evoke serious pain. Our experiences with consequences also shape conscious awareness and emotions, and just using language offers consequences galore: ask for a cappuccino and be rewarded by getting one. The “pleasure centers” in our brains are busy places.

Learning from consequences—technically known as operant learning—helps us and many other species take advantage of the immense flexibility in interacting nature-nurture systems. We know enough about neuroscience now to realize how extensively this form of environmental influence rewires the brain. In a classic series of studies, University of California, San Francisco, neuroscientist Michael Merzenich and colleagues found that owl monkeys rewarded for learning to discriminate different sounds showed an increase in the size of the corresponding area in their auditory cortices—unlike monkeys hearing the same sounds merely as background noise. Consequence-based methods are now standard in stroke therapy, restoring mobility as they alter the brain.

Other methods based on this science have helped people with autism move out of mental institutions and into markedly improved lives, with treatments endorsed by many organizations, including the US Surgeon General’s office. Combined with Pavlovian principles, these methods also offer successful evidence-based treatments for depression and many other conditions.

Closer to home, the science of consequences can help us improve our self-control, maximize our intellectual potential, and bring more of the positive to our daily lives: at work, at school, at home, and in our interactions with animals.

B. F. Skinner, my friend and colleague, laid the foundations of this science in the 1930s. It has now expanded to feature sophisticated mathematical models and impressive knowledge of its neurophysiological correlates, and it has become an integral part of many of the life sciences. Its full scope and potential are only just coming to be realized.

Biopsychologist Susan M. Schneider is currently a Visiting Scholar at the University of the Pacific. Read an excerpt of The Science of Consequences.