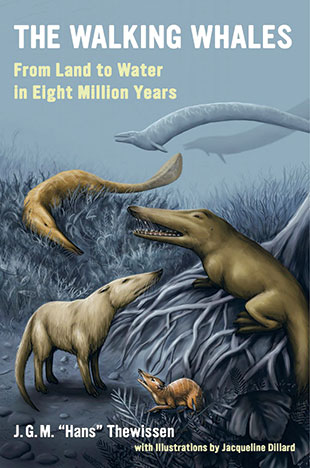 UNIVERSITY OF CALIFORNIA PRESS, NOVEMBER 2014Scientists ever since Aristotle have known that whales and dolphins were mammals, but for most of human history, the general public was not aware of this scientific fact or simply did not agree. In Moby Dick, Ishmael opines thusly: “Be it known that, waiving all argument, I take the good old fashioned ground that the whale is a fish, and call upon holy Jonah to back me.” Even Charles Darwin struggled with the concept. In the first edition of On the Origin of Species, he suggested that whales might be derived from bears that filtered insects out of the water, but after being ridiculed for that idea, he eliminated the statement from later editions.

For centuries, it was difficult to conceive of a whale ancestor that combined features of its land-mammal ancestors and its aquatic descendants. And the fossil record...

The past two decades have changed all that, and whale evolution now is one of the best examples of macroevolution documented in the fossil record. In The Walking Whales, I revisit the evolutionary origin of whales, from little Indohyus, the tiny deer-like critter that roamed the forest floor in the middle Eocene, diving into the water to avoid predators, to Basilosaurus, the first fully aquatic leviathan of the late Eocene, unable to move on land with its tiny hind limbs that barely protruded from the body. As evolution experimented with anatomical accessories and overall shape, there were whales that looked like wolves, ones that hunted like crocodiles, and others that swam like otters. Most of these species were short-lived, rapidly replaced by others that more closely resembled their future relatives.

Discovering these variations in whale form and function is exhilarating. Seared into my brain is the time I sat on the porch of a Pakistani guesthouse, puzzling over the sea-lion-size skeleton that we had just dug up in the Kala Chitta Hills. I opened some of the packages containing fossil remains that I had wrapped earlier that day, and as I scraped with a dental tool, I realized that this was a whale—one that could walk around on the large hind legs that we had unearthed. It was the first such whale to be seen by a human, ever.

My book highlights the excitement of the fossil hunt, how victories shape scientific progress, how setbacks open eyes to paths untraveled, and how I learned to appreciate sweet chai when our car broke down along northeastern Pakistan’s dusty roads for the third time in a day.

If our understanding of whale origins has come a long way in the past two decades, then where will it go in the next two? In the last few chapters I summarize how embryology and developmental and molecular biology help us understand particular shapes in whales. Dolphin embryos have hind limb buds that disappear before the young are born, and the molecular basis for that process is understood and evolutionarily relevant. Baleen whale fetuses have teeth, and those, too, vanish as baleen develops before the whale is born.

I close the book by dusting off my crystal ball, and with the same bias I confessed to before, I predict that blending scientific disciplines—geology, paleontology, anatomy, embryology, and developmental and molecular biology—will give us a powerful instrument to understand even more about the evolution of whales, a most fascinating process and a most fascinating group. That is the challenge for the next 20 years: we need excited young people to step up to the plate and take a swing. 

J.G.M. “Hans” Thewissen is a professor of anatomy at Northeast Ohio Medical University. He studies fossil whales from Pakistan and India and modern whales and their embryos from Alaska, and is coeditor of the Encyclopedia of Marine Mammals. Read an excerpt from The Walking Whales.