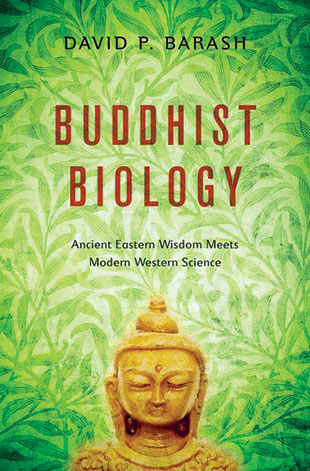 OXFORD UNIVERSITY PRESS, NOVEMBER 2013The connection—or disconnect—between science and religion has been a matter of debate as long as the two constructs have existed. Some scientists accept the late Stephen Jay Gould’s suggestion that the two are “NOMA” (nonoverlapping magisteria), claiming that science and religion occupy distinct realms, the former concerned with what is, the latter solely with what should be. Others (including myself) reject the NOMA notion, pointing out that religion makes many claims about the real world that are frequently contradicted by scientific fact.

There is, however, an intriguing exception: Buddhism. Perhaps this is because Buddhism is as much philosophy as religion. Science and Buddhism have met, and they get along remarkably well. Instead of NOMA, think “POMA” (productively overlapping magisteria). That is the premise underlying my most recent book, Buddhist Biology: Ancient Eastern Wisdom Meets Modern Western Science.

Consider, for example, the extraordinary...

“If you are a poet,” wrote the contemporary Zen master Thich Nhat Hanh, “you will see that there is a cloud in this sheet of paper. Without a cloud, there will be no rain; without rain, the trees cannot grow; and without trees, we cannot make paper.” The ecological concept of food webs is remarkably similar to the fundamental insight of Buddhism: the interconnectedness and interdependence of all things (pratitya-samutpada in Sanskrit; paticca-samuppada in Pali).

Theravada Buddhists have long been advised to practice self-restraint and consideration for others; Mahayana Buddhists are enjoined to liberate all beings from suffering. Throughout, the underlying principle is compassion, which means something quite different from mere sympathy or facile assertions about feeling another’s pain.

The foundation of such compassion is a Buddhist teaching that is among the most difficult for Westerners to grasp: the concept of “not-self.” For Buddhists there is no self as an internalized, permanent core of isolated individuality, because each of us arises in conjunction with others, dependent on and inseparable from one another. Everyone is composed entirely of non-self stuff, atoms and molecules that each of us shares with everything. For Buddhists and ecologists alike, all living things are created from spare parts scavenged from the same cosmic junk heap, from which “our” components are merely on temporary loan, and to which they will eventually be recycled. The Buddhist suggestion that an organism’s skin does not separate it from its environment, but joins it, could just as well have come from a physiological ecologist, had any existed 2,000 years ago.

The late 19th-century British poet Francis Thompson said it this way: “All things . . . / Near or far, / Hiddenly / To each other linkèd are, / That thou canst not stir a flower / Without troubling of a star.” And proto-ecologist John Muir glimpsed the same basic principle: “When we try to pick out anything by itself, we find it hitched to everything else in the universe.” For ecologists, no less than poets or Buddhists, it is the basic rule.

At one point in Origin of Species, Darwin speculated playfully that by keeping cats, spinsters made London a more flowery place. His idea was that cats eat mice, and mice occasionally destroy the nests of bumblebees, which pollinate flowers. So more cats, fewer mice. Fewer mice, more bumblebees. More bumblebees, more flowers. No one has ever tested Darwin’s proposal, but many other such ecological connections have been elucidated; scientific embodiments of Buddhist philosophy.

The joke goes: “What did the Buddha say to the hot-dog vendor?”

“Make me one with everything.” But it’s no joke: we already are.

David P. Barash, an evolutionary biologist and professor of psychology at the University of Washington, is the author of 34 books and more than 200 peer-reviewed research articles. Read an excerpt of Buddhist Biology.