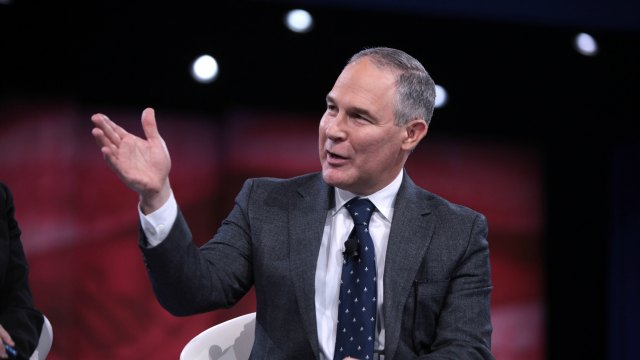 —University of California, Berkeley, structural biologist Jennifer Doudna speaking to reporters after the US Patent and Trademark Office’s Trial and Appeal Board ruled in favor of the Broad Institute in an ongoing legal battle over patents for CRISPR genome-editing technology (February 15)

Everything he did, he was ahead of everybody in so many ways. He was a genius of a very special type. Not only because he had this incredible imagination and brain, but he had incredible tenacity and courage.

—Vitek Tracz, publisher of Faculty of 1000 and former co-owner of The Scientist, on the passing of Eugene Garfield, the scientometrics pioneer who launched The Scientist in 1986 (February 27)...

I think that measuring with precision human activity on the climate is something very challenging to do, and there’s tremendous disagreement about the degree of impact, so no, I would not agree that it’s a primary contributor to the global warming that we see.

What is worse, the Administration and Board of Trustees . . . have known about this discrimination, yet done absolutely nothing to stop it or right the wrongs perpetrated against its equally talented and decorated female Full Professors.

—Molecular biologist Beverly Emerson of the Salk Institute for Biological Studies in a lawsuit brought against Salk for gender discrimination, following similar suits from two other female full professors (July 18)

I’m simply stating that the distribution of preferences and abilities of men and women differ in part due to biological causes and that these differences may explain why we don’t see equal representation of women in tech and leadership.

—A memo, penned by software engineer James Damore, decrying what he calls “arbitrary social engineering” aimed at increasing workplace diversity at Google, which fired him after the document circulated first inside then outside the company, according to Gizmodo (August 5)

I firmly believe that scientists should have the intellectual freedom to tackle the most pressing issues of the day, regardless of the political landscape.

—Ecologist Jennifer Bowen of Northeastern University’s Marine Science Center, writing in an email to The Washington Post after receiving instructions to remove the phrase “climate change” from a federal grant proposal (August 28)

You can’t have a meeting where people get together to decide [if] there should be funding in a particular aspect of biology when it’s not clear that the U.K. will be participating.

—Regenerative medicine specialist Michele De Luca of the University of Modena and Reggio Emilia, describing to The Scientist progress in a young Syrian boy who received a transgenic
skin transplant over most of his body (November 8)

Studies like this [are] extremely crucial. Unfortunately things didn’t work out. . . . We will do our best to do better next time.

—Suresh Garimella, executive vice president for research and partnerships at Purdue University, after the closure of the Camp DASH nutritional study following allegations of sexual assault among its adolescent participants, according to the Journal & Courier (November 28)

I’m truly honored to receive this award, humbled to be in such distinguished company and tremendously gratified that the study of plants, which is essential to developing everything from better agricultural practices to mitigating global warming, has been put in the spotlight with this award.

—Joanne Chory, a plant biologist at the Salk Institute for Biological Studies, in a press release on receiving one of this year’s Breakthrough Prizes for her work on the mechanisms of plant responses to shade (December 3)