Plant roots support an array of microorganisms that can have either a deleterious or beneficial impact on plant health and growth. The use of beneficial microorganisms, called plant growth-promoting rhizobacteria (PGPR), increases plant growth and crop yield. In the March 31 , Choong-Min Ryu and colleagues from Auburn University, Alabama, US, show that some PGPRs release a blend of airborne chemicals — volatile organic compounds (VOCs) — that promote the growth of seedlings (, DOI:10.1073/pnas.0730845100, March 31, 2003).

Ryu et al. investigated the role of VOCs from seven strains of PGPRs on total leaf surface area. They showed that 2,3-butanediol and acetonin, released exclusively from two bacterial strains triggered the highest levels of plant growth. Insertional analysis of enzymes involved in the synthesis of these two VOCs resulted in a removal of the growth promotion effect. Further, exogenous application of 2,3-butanediol to seedlings resulted in dose-dependent growth promotion.

"PGPR strains release different volatile blends and that plant growth is stimulated by differences in these volatile blends. The mechanism by which volatile components from PGPR promote growth via cell expansion and/or cell division and the interaction of 2,3-butanediol with established plant growth hormones are areas that now can be examined," conclude the authors. 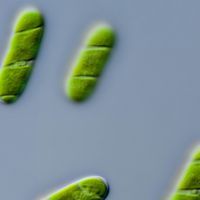