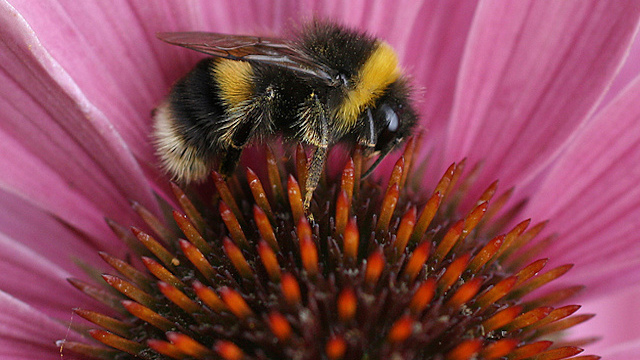 Buff-tailed bumblebees (Bombus terrestris) can learn to dribble a ball to a target for a sugary reward, researchers reported last week (February 24) in Science. To see whether the bees could learn a task they would not encounter in the wild, a group of biologists at the Queen Mary University of London stuck a plastic bee on transparent stick and moved it across a platform toward a marked location where a drop of sugar water appeared, while the real critters watched. After seeing this demonstration several times, the bees were able to complete this task on their own.

Then, to investigate how the bees were learning, the team separated the insects into three groups: one that observed trained bees, another that watched a “floating” ball moving to a target on its own, and a third that did not receive demonstrations. Although some...

Bumblebees can count, dance to communicate, and have even exhibited emotion-like states, but this is the first time scientists have observed bees learning a task “they’ve unlikely ever seen in their evolutionary history,” the authors wrote in The Conversation. “The fact that bees learned this unnatural and complex task through observation alone and could improve on what they saw, rather than simply copy what they observed, shows an unprecedented amount of cognitive flexibility in an animal with such a small brain.” 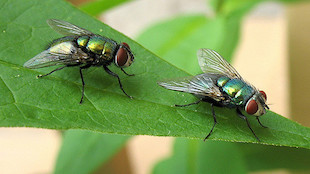 Green bottle flies (Lucilia sericata) can recognize potential mates by the flashes of light reflecting off their moving wings, according to a study published this month (February 14) in BMC Biology.

Biologists at Simon Fraser University in Canada filmed both young and old male and female flies while they flew around in a wire mesh cage under various lighting conditions. The researchers discovered that the flies’ wings reflected a flash of light with each movement—and male flies were more attracted to light flashing at frequencies around 178 hertz (Hz), which were typical of young females, than those around 212, 235, and 266 Hz (frequencies characteristic of young males, old females, and old males, respectively). Males were also attracted to lights that pulsed at frequencies that matched young females,’ and also preferred females with functional wings to those with immobile ones. 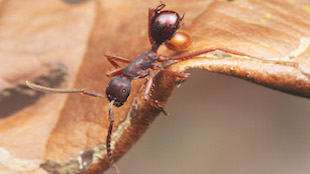 A tiny beetle from the Costa Rican rainforest (Nymphister kronaueri), hitches rides on the backs of army ants (Eciton mexicanum), researchers reported in BMC Zoology this month (February 10). N. kronaueri use their mandibles to clamp onto the abdomens of medium-sized worker ants. The beetles go unseen, camouflaging into their hosts’ backsides.

“To the human eye, the beetle is quite difficult to detect when attached to the ant as they are similar in size and shape to the host ants’ abdomen,” Christoph von Beeren, study coauthor and a postdoctoral researcher at the Technical University Darmstadt in Germany, said in a statement. “We think that by imitating this part of the ants’ body they might reduce the chance of recognition by the ants, allowing the beetle to travel undetected.”

Army ants are dangerous predators—they kill and eat almost any other insect in their path. Despite this, N. kronaueri are only one of many insect species that depend on these ants for survival. “However, only a few beetles have really gone all in and said: screw it, we’re going to literally ride around on the very ants that want to murder us,” Ainsley Seago, a beetle expert at Australia’s CSIRO who was not involved in the study, told The Atlantic. 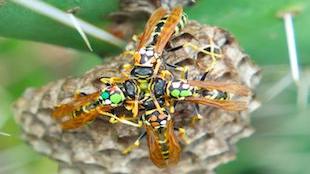 In paper wasp (Polistes dominula) populations, helper wasps gain membership into a nest by foraging for food to feed the dominant breeder wasp’ offspring. How much subordinates are willing to work, however, depends on the number of nest options available, according to a study published last month (January 24) in Nature Communications.

University of Sussex biologists marked and genotyped 1,500 wasps within 43 separate nests, then investigated whether the forces of supply and demand influenced the insects’ behaviors. When the researchers increased the number of available nest spots and nesting partners, helper wasps worked fewer hours and breeders were forced to allow subordinates to work less to keep them in their nests. “Market forces can clearly affect trade agreements in nature, as they can in human markets: with a larger number of trading partners available, you can negotiate better trade deals,” coauthor Lena Grinsted, a postdoc at the University of Sussex, said in a statement. 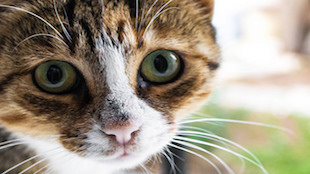 Researchers at Kyoto University and the University of Tokyo conducted two sets of experiments on domestic cats to see whether the felines could recall the context surrounding a pleasant memory (in this case, having eaten). In the first set of trials, the team led 49 cats to four open food bowls and allowed them to eat from only two. They then took the cats to another room while they replaced the dishes with identical empty ones. When the felines came back to the testing room, they spent more time exploring the bowls they had not yet eaten from.

The team found similar results in the second experiment, conducted five months later with 58 cats, where only two bowls contained food, one had an inedible object, one was empty, and cats were only allowed to “eat” from one. In the second phase of the test, when the experimenters returned the cats to the bowls, the felines spent more time exploring the one that had previously contained food but they had not yet had a chance to taste. “Our results demonstrate that cats may possess an incidental memory system, similar to dogs and humans,” the researchers wrote in their paper.

Laurie Santos, an associate professor of psychology at Yale University who was not involved in the study, told BBC News that the study “opens the door to new studies examining how long cats’ memories can be and whether they also remember richer episodes in their own life as humans do.”