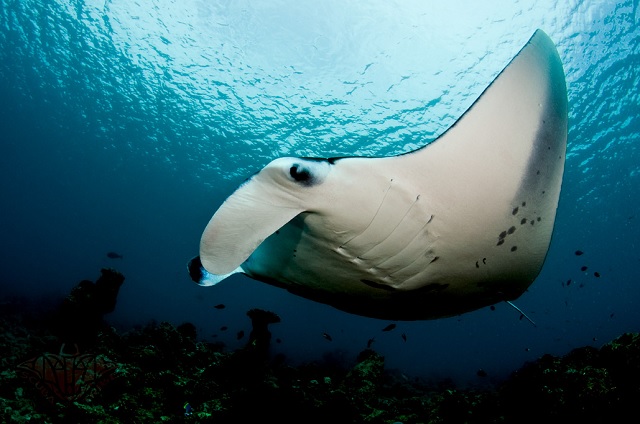 Manta in the mirror

The mirror self-recognition (MSR) test is commonly used to evaluate nonhuman animals’ self-awareness, and has been reportedly passed by several mammals and birds including apes, elephants, dolphins, and magpies. According to a study published earlier this month (March 11) in The Journal of Ethology, there’s now evidence to add manta rays to that list.

Observing two rays in a tank at the Atlantis Aquarium in the Bahamas, the researchers noticed that the animals changed their behavior when a mirror was placed on one of the walls. New behaviors included apparently checking out their fins (see this video) and blowing bubbles...

“This new discovery is incredibly important,” Marc Bekoff of the University of Colorado in Boulder who was not involved in the study told New Scientist. “It shows that we really need to expand the range of animals we study.”

But the MSR test’s developer, Gordon Gallup of the State University of New York at Albany, told New Scientist that the observed movements might reflect curious, rather than self-aware, behavior. “Humans, chimpanzees, and orangutans are the only species for which there is compelling, reproducible evidence for mirror self-recognition,” he said. 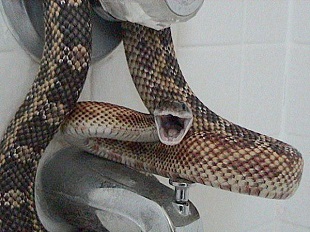 Rattlesnakes and other vipers are well-known for their lightning-quick bites, but nonvenomous snakes may be just as speedy, according to a study published this month (March 15) in Biology Letters.

“There’s this kind of pre-emptive discussion that [vipers] are faster,” study coauthor David Penning of the University of Louisiana, Lafayette, told Smithsonian. But, he added, “as sexy as the topic sounds, there’s not that much research on it.”

To put the assumption to the test, Penning and his colleagues used a high-speed camera to film strikes from three snake species—the western cottonmouth and the western diamond-backed rattlesnake (both vipers), and a relatively harmless Texas rat snake that kills its prey using constriction.

“I was really surprised, because this comparison hadn’t been made before,” Rulon Clark of San Diego Statue University who was not involved in the work told Smithsonian. “It’s not that the vipers are slow, it’s that this very high-speed striking ability is something that seems common to a lot of snake species—or a wider array than people might’ve expected.”

Penning told Discover Magazine that the results make sense, since even nonvenomous snakes have to catch their food. “Prey are not passively waiting to be eaten by snakes,” he said. 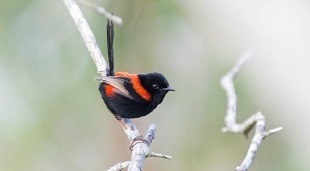 Emerging evidence suggests that both humans and superb fairywrens begin learning the vocal patterns of their mothers even before birth. Now, a study published this month (March 16) in The Auk: Ornithological Advances indicates that the same is true of the red-backed fairywren, offering the possibility of studying the phenomenon across related species.

“Fairywrens have become a new model system in which to test new dimensions in the ontogeny of parent-offspring communication in vertebrates,” study coauthor Mark Hauber of New York City’s Hunter College said in a statement.

Following on their previous discovery of prenatal learning in superb fairywrens, the researchers compared the structure of nestling calls in the red-backed fairywren to the calls of the birds’ mothers. The team found that the more calls per hour that nestlings received when in the egg, the higher the similarity to maternal calls after hatching. (The number of calls received during the nestling period had no effect on call similarity.)

“Prenatal vocal learning has rarely been described in any animal, with the exception of humans and Australian superb fairywrens,” William Feeney of the University of Queensland, Australia, who was not involved in the work said in the statement. “This result is exciting as it opens the door to investigating the taxonomic diversity of this ability, which could provide insights into why it evolves.” 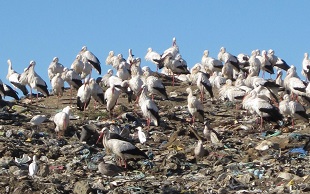 White storks may be addicted to junk food, in some cases making migratory trips of tens of kilometers to landfill sites during the breeding season, according to a study published earlier this month (March 15) in Movement Ecology.

“We found that the continuous availability of junk food from landfill has influenced nest use, daily travel distances, and foraging ranges,” study coauthor Aldina Franco of the University of East Anglia said in a statement. “Storks now rely on landfill sites for food—especially during the non-breeding season when other food sources are more scarce.”

Using GPS tracking, the researchers focused on 17 storks traveling between nesting and feeding areas over the course of a year. They found that most long-distance trips were made to landfill sites, and that “having a nest close to a guaranteed food supply also means that the storks are less inclined to leave for the winter,” Franco explained in the statement. “They instead spend their non-breeding season defending their highly desirable nest locations.”

“It’s clear migratory behaviors are quite plastic, in that the [storks] are adaptable and can change quickly,” Andrew Farnsworth of the Cornell Lab of Ornithology who was not involved in the work told National Geographic. He added that the new, detailed dataset will help scientists “consider how such changes in behavior may affect the future population of these birds.” 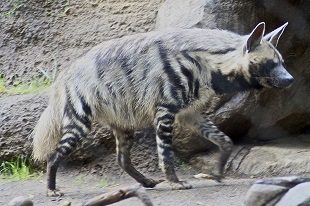 Israel’s barren Negev desert is home to striped hyenas and gray wolves—two large scavenger species with considerably overlapping diets. But although such conditions might be expected to create fierce competition, researchers in Israel and the U.S. have now presented evidence that—at least in some cases—these animals form alliances and may even hunt collaboratively for food. The findings were published last month (February 10) in Zoology in the Middle East.

Wolves and hyenas in the desert might “just need each other to survive, because food is so, so limited,” study coauthor Vladimir Dinets of the University of Tennessee in Knoxville told The Washington Post.

Collating observations made over the past two decades (including reports of overlapping paw prints, and sightings of hyenas among packs of wolves), the researchers note that the findings could reflect the behavior of a few, oddly behaving hyenas, or a more widespread commensal, or even cooperative, relationship between the species.

“Animal behavior is often more flexible than described in textbooks,” Dinets said in a press release. “When necessary, animals can abandon their usual strategies and learn something completely new and unexpected. It’s a very useful skill for people, too.”