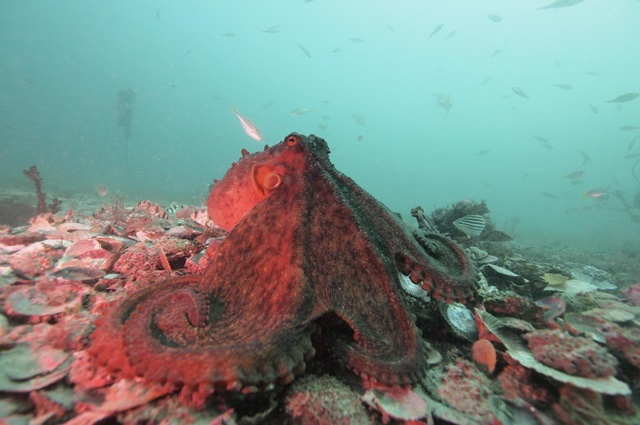 An octopus displaying a dominant stance, with spread limbs and dark colorationDAVID SCHEEL (VIA EUREKALERT)

Octopuses use color and postural changes to communicate and potentially avoid conflict, according to a study published last month (January 28) in Current Biology. The findings suggest that the animals have much more complex social interactions than previously thought.

Observing more than 180 interactions between shallow-water octopuses (Octopus tetricus) at Jervis Bay in southeastern Australia, researchers from Alaska Pacific University in Anchorage found that some octopuses stood up tall, stretched out their limbs, and darkened their skin coloration on meeting another octopus. “We suspect this behavior makes the octopus appear as large and conspicuous as it can,” study coauthor David Scheel told New Scientist.

Faced with this intimidating display, some octopuses would shrink back, turn pale, and retreat. But when two octopuses maintained a similarly dark...

Tamar Gutnick of the Hebrew University of Jerusalem, who was not involved in the study, told New Scientist that social behavior in octopuses is poorly understood. The findings “show that there are still misconceptions about octopuses and their world which remain to be tested,” she said. 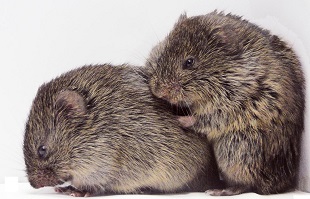 A vole consoling its stressed partnerZACH JOHNSON (VIA EUREKALERT)

Consoling behavior can reduce stress in both humans and apes, but has rarely been observed in other animals—at least those housed in laboratory settings. A study published in Science last month (January 22) has suggested the behavior extends to prairie voles as well.

Observing the interactions of monogamous pairs of voles (Microtus ochrogaster), researchers at Emory University in Atlanta reported that an individual stressed by a small electric shock received more grooming attention from its partner than if it had received no negative stimulus. “These voles are not smart, so this is not an intelligence thing,” study coauthor Larry Young of Emory told The New York Times. “Some kind of gut instinct causes them to respond intuitively to the stress of others.”

The researchers showed that levels of the stress hormone corticosterone increased in undisturbed prairie voles when they encountered a stressed partner—an observation the researchers suggest may reflect a potential “empathy mechanism.” The team further found that the behavior depended on the action of oxytocin in the consoling partner at an area of the brain called the anterior cingulate cortex—a region also implicated in human empathy.

Since consolatory grooming was only directed at voles that the consoling partner knew, Young told The Atlantic, the behavior “seems like a very specific adaptation to social living.”

Peggy Mason of the University of Chicago told The Atlantic that the results provide “a very beautiful demonstration that we’re not talking about something that depends on fancy primate processing,” she said. 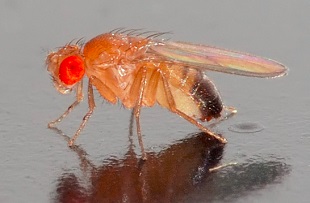 Despite possessing only 100,000 neurons (one-millionth the number of a human brain), male fruit flies (Drosophila melanogaster) can adjust the amplitude of their songs during courtship depending on the distance of females, according to a study published last week (February 3) in Neuron. Previously, the ability to adjust vocal amplitude according to distance had only been documented in humans and songbirds.

“While the precise neural mechanisms underlying the generation and patterning of fly song may be distinct from humans or even songbirds, the fundamental problem is the same: how can a neural network produce such a complex and dynamic signal?” said study coauthor Mala Murthy of Princeton University in a statement. “We anticipate that similar neural mechanisms will be employed in all systems, and the genetic model system of the fruit fly is an ideal starting point from which to dissect them.”

When courting females, male fruit flies vibrate their wings to produce one of two singing modes, pulse and sine, which, if amplified around a million times, would sound to humans somewhat like a cat’s purr and a mosquito’s whine, respectively.

Analyzing the stages of the neuronal pathway controlling courtship songs, the team identified both the visual stimuli prompting a male to sing more loudly to distant females, and the motor circuit governing the muscle activity regulating the change.

Females listen to “many minutes” of these songs before making a decision about whether to accept a male, Murthy explained in the statement. “There is thus enormous evolutionary pressure for males to optimize their song to match the female’s preference while simultaneously minimizing the energetic cost of singing for long periods of time.” 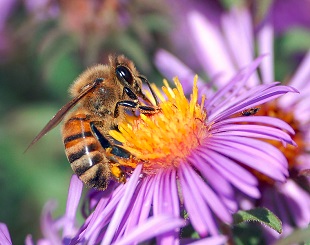 Honeybees’ foraging efforts vary according to a number of factors, including the time of day, food availability, and colony size. Researchers at Jiangxi Agricultural University in Nanchang, China, have now shown that bees may also adjust their schedules according to the weather forecast. The findings were published late last year (December 15, 2015) in Insect Science.

The researchers attached radio-frequency identification (RFID) tags to worker bees in three colonies, and then monitored their comings and goings through the hive entrance over the next 34 days. They found that bees spent longer periods out of the hive and worked later into the afternoon on days preceding rainy weather than on days preceding sunny weather. In other words, the weather of the following day determined the bees’ current foraging behavior.

In their paper, the authors suggested that the honeybees might be sensing and responding to temperature and humidity changes forecasting rainstorms, and foraging so as to maintain productivity accordingly. But Gene Robinson of the University of Illinois at Urbana-Champaign told New Scientist that this behavior would be unexpected, since honeybees are hoarding animals and therefore should not need to build up food stores for rainy weather.

Future work, the authors wrote, might address “what factors in the weather system are perceived and how bees communicate the need for behavioral changes to the whole colony.” 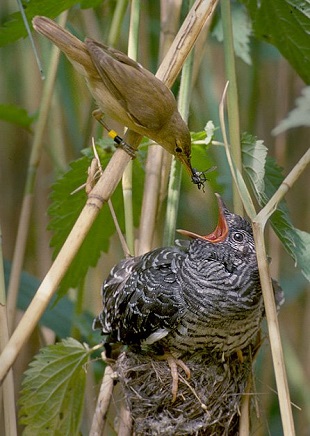 Keep the right one in

The common cuckoo (Cuculus canorus) parasitizes the nests of more than 100 other bird species. But reed warblers (Acrocephalus scirpaceus) have a way of fighting back, according to a study published last month (January 22) in Scientific Reports: the birds pool their information.

Observing video recordings of cuckoos parasitizing warbler nests in Wicken Fen, England, researchers at the University of Cambridge found that warblers rejected eggs from their nests if both personal and social information indicated a threat.

“For action to be taken, the clues had to add up,” said study coauthor Rose Thorogood in a statement. “The warblers needed to be alerted by their neighbors’ behavior that there was a cuckoo at large in the neighborhood and they needed to be aware of a more local and imminent threat, by seeing a cuckoo near their own nest.”

The authors suggested in their paper that the behavior lowers the risk of wrongly rejecting one of the warbler’s own eggs, since neither personal nor social information provides a completely reliable cue on its own.

“This is fascinating because we have assumed previously that animals favor one type of information over the other,” said Thorogood in the statement. “Here we show that combining information is the best way to take the most appropriate course of action.”