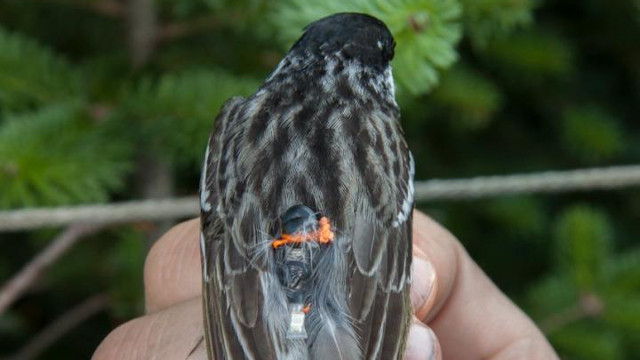 Voyage of the blackpoll

The blackpoll warbler (Setophaga striata), a songbird that only weighs as much as a AAA battery, completes an annual migration over open water of up to three days and more than 1,700 miles, the longest known of any land-based bird, according to a study published last week (April 1) in Biology Letters.

Blackpolls migrate from New England and eastern Canada to spend the winter in Colombia and Venezuela. Most migrating non-aquatic birds take a land-based route. Blackpolls, by contrast, had never been observed in the southeastern United States in the autumn; they have instead landed on ships crossing the Atlantic and even in Britain, but there was no direct proof that the small songbirds traveled over water. Researchers from the University of Massachusetts, Amherst, the University of Guelph and Acadia University, both in Canada, the Vermont Center for Ecostudies,... 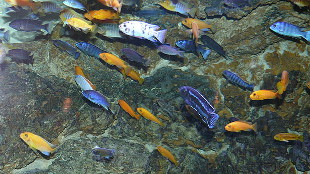 The many quickly-evolving species of Lake Malawi cichlid fish change their courtship rituals as well as their physical traits to adapt to living at different depths, according to a study published last month (March 18) in Frontiers in Ecology and Evolution.

Researchers from Stanford University, Georgia Tech, and the University of Tennessee, Knoxville, generated a phylogenetic tree of 75 species to represent the more than 500 species of cichlids that have evolved in Lake Malawi during the past 5 million years. Using data from the literature, they found that the genetic relationship between the species did not correlate with the two general shapes of nests, or bowers, built by males to attract females to lay their eggs. Males of species such as Mchenga conophoros that live near the surface—at an average depth of 49 feet—build mounds of sand known as “castles,” whereas males of species such as Copadichromis virginalis—which live in waters twice as deep, where it is too dark to see the mounds—dig pits to attract mates. The deeper-dwelling males compensated for their less effort-intensive bowers by spending twice as much time in display behaviors, such as swimming towards females and puffing out their fins and gills to appear larger, compared with males of species that live nearer the surface.

Often, closely-related species displayed opposite behaviors, suggesting that these mating displays have evolved multiple times. The researchers also found other traits that differed depending on the depth where the species lived, such as a greater jaw extension and less ultraviolet (UV) light detection in the retinas of fish that dwell further from the surface.

“Lake Malawi cichlids are famous for the diversity and fast evolution of their feeding habits, body form, and sex determination system,” study coauthor Ryan York of Stanford said in a statement. “Here we show for the first time that their courtship rituals also evolve exceptionally fast.” 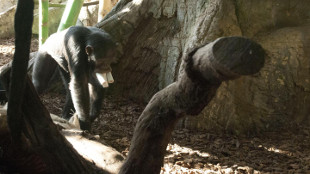 Will travel for food

Captive chimpanzees are willing to go the proverbial extra mile to get food they prefer, according to a study published last month (March 17) in PeerJ.

Researchers at the Lincoln Park Zoo in Chicago had previously determined that six of the zoo’s chimpanzees preferred grapes over carrots as a snack. To use this information to test how willing the animals were to put extra effort into getting grapes, the scientists conducted a 15-month study, during which the chimps underwent three sets of 30 trials. In the first and last sets, the chimps could exchange “tokens”—pieces of PVC pipe—for carrots at the location where they collected the tokens, or take them to another location around 50 feet away to exchange them for grapes. By the third phase, most animals made the extra trip to get their fruit snack. In the middle trial, when the chimps had to travel to collect either reward, they were less likely to bother at all.

The chimps learned the trading strategy from one another. The first chimp to discover the secret of the far location was a low-status female, while the last to catch on was an alpha male who only exchanged the tokens for grapes after watching the other members of his troop for 13 months. “In addition to learning about food preferences and proximity, we also observed innovative, problem-solving behavior among the chimpanzees,” study coauthor Lydia Hopper of the Lester Fisher Center for the Study and Conservation of Apes at Lincoln Park Zoo said in a statement. The behavior is consistent with observations of wild chimpanzees, black howler monkeys, and capuchins, who are known to travel farther in their natural environment to obtain more desirable food. 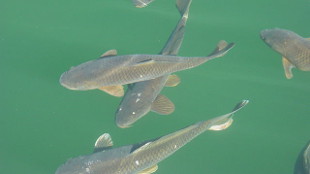 The limited number of suitable spawning sites for Asian carp (Hypophthalmichthys sp.) in the Great Lakes system might actually make it easier for a small founding population of the invasive species to infiltrate the ecosystem, according to a study published last month (March 11) in Theoretical Ecology.

A variety of species find mates by meeting at noteworthy landmarks in the environment. In a behavior known as “hilltopping,” for example, some butterflies seek out the highest elevations of their habitat, be it a hilltop or a tall tree, to find mates of the same species. To investigate the potential impact of this so-called landmarking behavior on the spread of Asian carp in the Midwest, researchers from the University of Waterloo and the Great Lakes Laboratory for Fisheries and Aquatic Sciences, both in Canada, calculated the probabilities of males and females meeting at a fixed number of landmarks—in this case, rivers of the right size and flow rate. They found that with the limited number of landmarks available, as few as 10 carp could be enough to populate all the Great Lakes.

The results could help inform conservation strategy, the authors wrote in their paper.

“With an endangered species, if the number of landmarked sites is increased, the individuals will have a lower chance of finding a mate,” study coauthor Kim Cuddington of Waterloo said in a statement. “By contrast, decreasing the number of landmarked sites in an effort to keep invasive species from reproducing has the opposite effect, and ensures individuals have a near certain chance of finding a mate.” 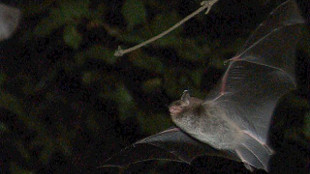 While out hunting for a midnight insect snack, a Daubenton’s bat (Myotis daubentonii) tunes into the echolocating sonar of a nearby bat and follows its movements at a distance of four to five wingbeats to avoid crashes, according to a study published last month (March 26) in PLOS Computational Biology.

Researchers from the University of Bristol in the U.K. recorded the echolocation noises of bats in nearby Somerset and then analyzed them in the lab. The scientists analyzed the sounds they recorded to simulate what each bat must have heard. They found that within half a second of hearing another bat’s sonar, a bat would change its trajectory and turn to follow the other bat. The two bats trade places as leader and follower during the course of a hunting session.

The crash-avoidance behavior of the bats could one day aid in the design of human traffic systems. “By employing movement strategies that nature has optimized over millions of years engineers may be able to improve the efficiency of search and rescue missions, monitoring tasks, and surveillance operations in the emerging market of flying drones and autonomous moving vehicles,” study coauthor Luca Giuggioli of Bristol said in a statement.