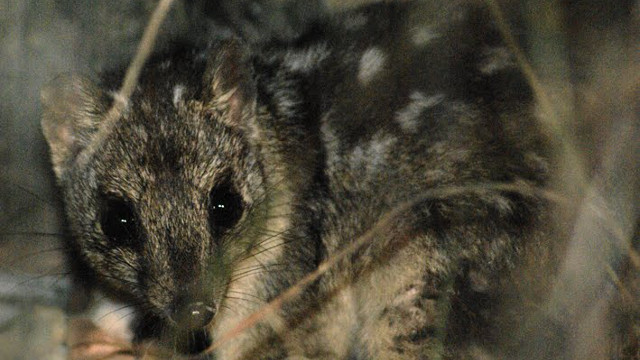 Quolls on a roll

The endangered northern quoll (Dasyurus hallucatus), the smallest of six species in Australia and Papua New Guinea, strikes a balance between maneuverability and speed when escaping from predators, according to a study published this week (February 4) in the Journal of Experimental Biology.

The quoll, a carnivorous marsupial, faces habitat loss, poisoning by invasive cane toads, and predation by feral cats, dogs, and foxes. Interested in how northern quolls might escape predators, a team of researchers from the University of Queensland captured 66 animals from an island off the coast of northeastern Australia, and tested the marsupials’ moves on an adjustable racetrack, made of two pieces connected at angles of 45, 90, or 135 degrees. The scientists filmed the quolls from above while chasing them down the track with a plastic block.

The researchers were surprised to find that foot... 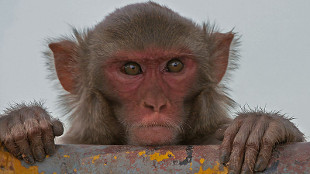 Monkeys in the mirror

With training, rhesus monkeys can learn to recognize themselves in the mirror, according to a study published last month (January 8) in Current Biology. Although humans learn self-recognition by the age of two and apes such as chimpanzees have been shown to be capable of identifying their reflections, the work is the first demonstration that monkeys might also be capable of this skill.

Neng Gong and colleagues at the Shanghai Institutes for Biological Sciences restrained rhesus monkeys in front of the mirror and shone strong lasers on their face to cause mild irritation. When the monkeys touched the irritated, laser-hit spots, they were rewarded with food. After two-to-five weeks of this training, the monkeys underwent a “mark test,” the gold standard for determining self-recognition. Five of the seven trained monkeys touched a spot on their face that was marked either by dye or a lower-powered pain free laser and then examined their fingers. No monkeys that had not undergone the training exhibited a similar behavior, which had been observed in the first mark test of chimpanzees in 1970. The trained monkeys also played with mirrors in their cages, while untrained ones ignored them. “Our findings suggest that the monkey brain has the basic ‘hardware’ [for mirror self-recognition], but they need appropriate training to acquire the ‘software’ to achieve self-recognition,” Gong said in a statement.

Other researchers, including Gordon Gallup of the State University of New York at Albany, the scientist who invented the mark test, are skeptical of the results. Gallup drew a distinction between animals that recognize themselves naturally and those that must be trained to do so. “Simply because you’re acting as if you recognize yourself in a mirror doesn’t necessarily mean you’ve achieved self-recognition,” Gallup told Nature News. 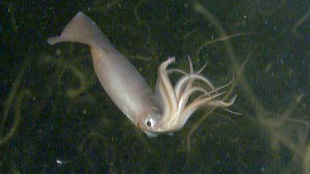 Humboldt squid (Dosidicus gigas) wearing Crittercams while swimming among their fellow cephalopods have revealed a wealth of their behaviors to researchers for the first time, including two ways the squid manipulate their chromatophores—color-changing skin cells—for communication and camouflage. The results were published last month (January 15) in The Journal of Experimental Biology.

The footage obtained from the video camera strapped to the bodies of three large squids showed that when one squid encounters another, it will rapidly switch the chromatophores along its entire body between red and white. This flashing behavior varied in frequency, suggesting that the squid may be using their rapid color changes to communicate with each other. When the squid approached the water’s surface, they instead used their chromatophores to create a flickering effect similar to the dappled sunlight passing through the surface. The scientists proposed that the flickering is not used for communication, but rather for camouflage.

The cameras also captured many previously unseen squid behaviors, such as a possible mating event. “A view into this previously secret world was like a dream come true,” study coauthor Hannah Rosen of Stanford University said in a statement. 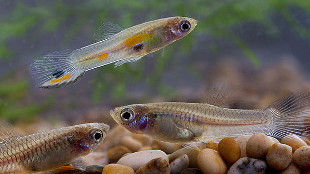 Endrocrine disrupting compounds (EDC) that mimic natural female or male hormones produce the opposite risk behavior of that expected in guppies when they are exposed to the chemicals most like their natural sex hormones, according to a study published last month (January 27) in Ethology.

Researchers from the University of North Carolina, Wilmington, exposed guppies (Poecilia reticulata) to environmentally relevant levels of an estrogen-like EDC, ethinylestradiol, or an androgen-like EDC, trenbolone. They then assessed how likely the fish were to engage in risky behavior by measuring how much time they spent with a group of other guppies—a safe behavior—and how much effort they spent foraging—a riskier move—in a tank containing a visible predator beyond a mesh divider. Males exposed to estradiol took fewer risks, while females unexpectedly took more. When exposed to the androgen disrupter, males unexpectedly again took fewer risks, while females took more, as expected.

The authors suggested that these results may be due to downregulation of the corresponding hormone receptors, thus lowering the levels of endogenous hormones in the guppies’ systems. The low concentrations of EDCs required to alter guppy behavior suggested that EDCs could easily impact ecosystems. “Prolonged alterations in behaviors involved in predator-prey interactions may lead to changes in the functioning of entire natural habitats or ecosystems, even at low EDC concentrations,” the authors wrote in their paper. 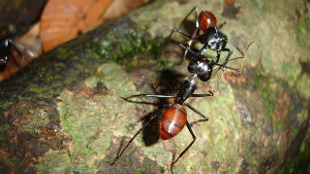 Species of ants which differ in size can coexist peacefully, but the insects will chase away similarly sized competing species, a study published last month (January 27) in Ecology Letters reported.

When researchers from Imperial College London, the National History Museum, and the University of Cambridge surveyed the 71 ant species found living in bird’s nest ferns high in the canopy of tropical forests of Borneo, they determined that species of similar size were unlikely to be found together on the same fern.

To explain their observation, the scientists tested what happened when a lab-based fern colonized by one or three ant species encountered an invading species of ant. If the newly introduced insects were similar in size to one or more of the species already present, they were less successful at colonizing the fern compared to a vacant one. Some of the ants even tossed their same-size competitors off the edge of the plant. But if much smaller ants were already present, the invaders were even more successful than they were when introduced to a vacant fern. A model based on the collected data suggested that size-based rules were enough to explain the community compositions observed in tropical forests. “Species segregation in the wild can be driven by competitive species assembly,” the authors wrote in their paper.