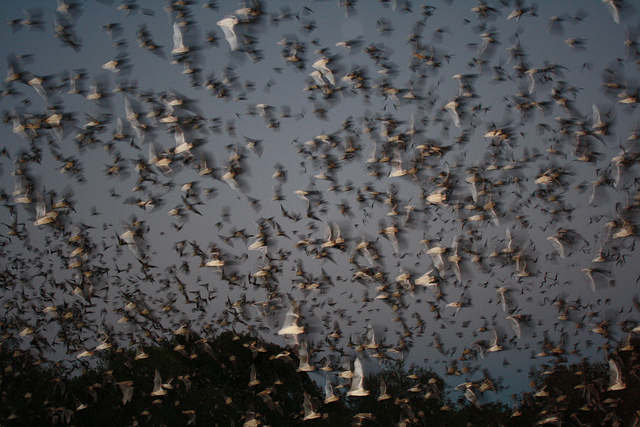 Bats produce at least 15 distinct sounds, which allow them to communicate with roost-mates and use echolocation to hunt for insects in the dark. New research shows that Mexican free-tailed bats (Tadarida brasiliensis) also emit signals that can interfere with each other’s hunting. In the study, published last week (November 7) in Science, bats were up to 85.9 percent less likely to catch prey when their competitors produced jamming signals.

“Bats have solved the puzzle of sonar jamming in one of the ways that sonar and radar engineers have used—bats just found the solution 65 million years earlier,” study coauthor William Conner of Wake Forest University told Popular Mechanics.

To document the bats’ jamming behavior, Conner and his colleague Aaron Corcoran used infrared cameras and sensitive microphone arrays to capture the sounds and trajectories of feeding bats in Arizona and...

“This is the first study to show that bats actively jam the echolocation of other bats,” Corcoran said in a press release. “It increases the number of known functions of bat sounds to three: echolocation, communication, and acoustic interference.” 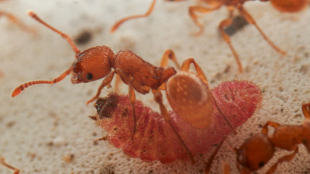 Some caterpillars that parasitize ant colonies coax worker ants to feed them by mimicking the sounds made by queen ants. Researchers from the University of Turin in Italy presented their discovery, based on close observations and acoustic experiments, at a meeting of the Acoustical Society of America in Indianapolis last month (October 29).

The same team previously showed that queen and worker Myrmica ants produce distinct sounds, and that parasitic Maculinea butterfly larvae entice worker ants to feed them using chemical cues. In the present study, they found similar sound patterns between the ants and Maculinea caterpillars. In particular, some caterpillars made sounds resembling those made by queen ants, giving the caterpillars priority feeding status within the ant colony.

“We hope our findings will boost research on acoustic communication in social parasites of ants,” study coauthor Francesca Barbero said in a press release, “[and] bring about significant advances in our understanding of the complex mechanisms underlying the origin, evolution and stabilization of host-parasite relationships.” 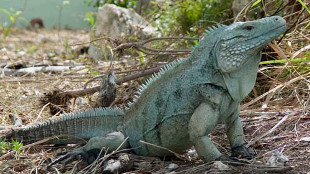 Snakes and lizards that reproduce later and have fewer offspring tend to live longer, according to an analysis of more than 1,000 species published on October 22 in Global Ecology and Biogeography. The study, the first of its kind to examine cold-blooded animals, also found that longevity was associated with larger body size and with herbivorous diets. Similar trends have been documented in birds and mammals and support the predictions of life-history theory.

“We observed that more sex (or at least more pregnancies) means shorter life, very much like the rock star adage, ‘live fast, die young,’” study coauthor Daniel Pincheira-Donoso of the University of Lincoln in the U.K. said in a press release. Compared to meat, “vegetal food is an intrinsically low-nutrition food, so we think that those who have these diets experience a reduction in reproductive rates, which in turn increases their lifespan,” he added.

On the other hand, the abundant protein in a carnivorous diet likely quickens growth, leading to earlier reproduction and larger broods, as well as a shorter lifespan, wrote Pincheira-Donoso and his colleagues. An alternative hypothesis is that hunting is a more dangerous lifestyle and leads more often to premature death. Experimental feeding of different reptile species could help to resolve these possibilities. 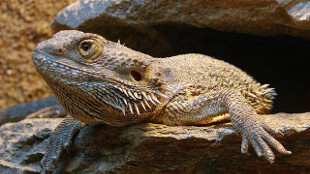 Mammals and birds aren’t the only animals that can learn by imitating their peers. Reptiles can also copy the actions of conspecifics, according to a study published September 9 in Animal Cognition.

Researchers from the University of Lincoln in the U.K. and the University of Vienna trained a bearded dragon (Pogona vitticeps) to open a sliding screen door and receive a mealworm reward. They then showed a video of the trained lizard to eight other bearded dragons. The animals that watched the video learned to open the door by moving their heads in the same way, although some first opened it on the second of 10 trials, while others did not succeed until the fifth trial. A group of four control animals, which simply watched the door open by itself in front of the demonstrator lizard, did not open the door nor make sliding head movements.

Because mammals and reptiles share a common ancestor, investigating social learning in reptiles could help to illuminate the evolutionary roots of cognition, according to study coauthor Anna Wilkinson of the University of Lincoln. “This research suggests that the bearded dragon is capable of social learning that cannot be explained by simple mechanisms—such as an individual being drawn to a certain location because they observed another in that location or through observational learning,” Wilkinson said in a press release. “The finding is not compatible with the claim that only humans, and to a lesser extent great apes, are able to imitate.” 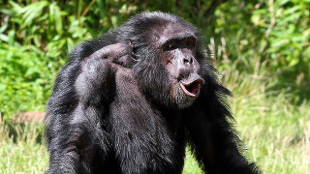 FLICKR, JUNK FOOD MONKEYSince Jane Goodall and her colleagues first reported chimpanzees killing one another 35 years ago, scientists have debated whether this warlike behavior is intrinsic to chimp society or a result of human interventions. A new analysis based on decades of research, published September 17 in Nature, suggests that lethal aggression in chimpanzees is unrelated to human feeding or habitat destruction.

A team led by Michael Wilson of the University of Minnesota used a computer model to test the so-called human impact hypothesis, and found that killings among chimps were best explained by adaptive strategies. The observed killings, mainly of male chimps by other males, likely led to evolutionary benefits in the form of food and mating opportunities. The analysis included data from 18 chimp communities, as well as four groups of bonobos, known as a more peaceful species. Among 152 killings, only one occurred in bonobos.

Not all experts agree with the conclusion that chimpanzee killings are not influenced by human activity. “The statistics don’t tell me anything,” Robert Sussman, an anthropologist at Washington University in St. Louis, told The New York Times. “They haven’t established lack of human interference.”

In a commentary published in the same issue of Nature, Joan Silk of Arizona State University cautioned that our views of primate behavior may be biased. We may want to believe that “morally desirable features, such as empathy and altruism, have deep evolutionary roots, whereas undesirable features, such as group-level violence and sexual coercion, do not,” she wrote. However, “humans are not destined to be warlike because chimpanzees sometimes kill their neighbors.” 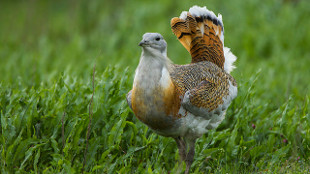 Females prefer to mate with males that are healthy and free of parasites, and males may improve their breeding success by consuming toxic beetles to “self-medicate,” according to a study published last month (October 22) in PLOS ONE.

Researchers at the National Museum of Natural History in Madrid, Spain, collected the feces of 25 male and 28 female great bustards during the spring breeding season. They found that males were twice as likely to eat blister beetles, which contain a toxin called cantharidin that the birds can tolerate in small amounts. The team also demonstrated that cantharidin could kill off several bacterial species commonly found in the birds’ feces.

But the data don’t support the conclusion that males that consume more blister beetles harbor fewer parasites and thus enjoy better breeding success, evolutionary biologist Daphne Fairbairn of the University of California, Riverside, told National Geographic. “What [the study authors are] suggesting is a cool idea, but that’s all it is at this point,” said Fairbairn. “As they acknowledge in the article, they really can’t show a connection between mating success and this behavior in males.”