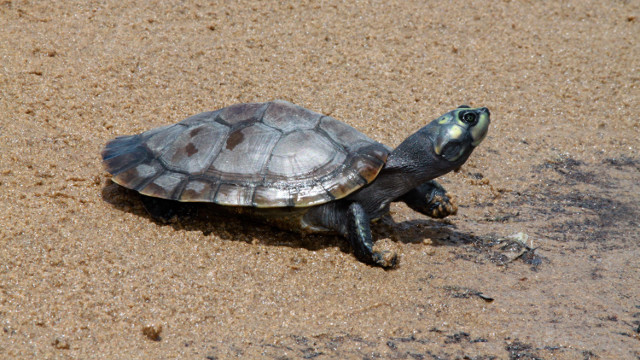 Amazonian river turtles may have a richer social life than previously thought. Scientists from the Wildlife Conservation Society (WCS) and Brazil’s National Institute of Amazonian Research documented six distinct vocalizations during the turtles’ nesting seasons between 2009 and 2011. They published their analyses in a June 2014 Herpetologica paper.

Giant South American river turtles (Podocnemis expansa) migrate in groups between flooded forests and nesting beaches. After the hatchlings emerge, mothers and their young migrate together back to the flooded forests. The researchers used microphones and underwater hydrophones to record the animals’ communications. A comparison of the turtle sounds’ peak frequencies revealed differences among vocalizations produced during migration, beach basking, and nighttime nesting. Although the precise meanings of the sounds are not yet clear, the vocalizations may help the animals coordinate their movements, Camilla Ferrara of the WCS Brazil program, who led the work, told...

Strikingly, mother turtles produced unique sounds when waiting for their hatchlings to emerge. “The females wait for the hatchlings,” Ferrara said. “And without these sounds, they might not know where to go.” 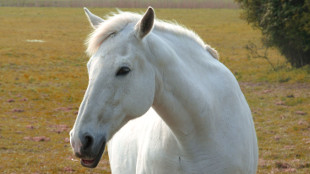 FLICKR, DAVID MARTYN HUNTHorses can follow the orientation of one another’s eyes and ears, according to research by a pair of scientists from the University of Sussex in the U.K. These results, published last month (August 4) in Current Biology, demonstrate for the first time that animals with eyes on the sides of their heads take note of one another’s gaze.

“Our study is the first to examine a potential cue to attention that humans do not have: the ears,” said lead author Jennifer Wathan in a statement. “Previous work investigating communication of attention in animals has focused on cues that humans use: body orientation, head orientation, and eye gaze; no one else had gone beyond that.” 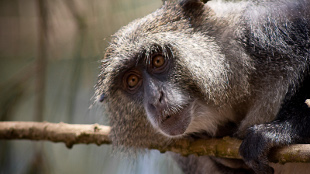 FLICKR, OWEN JONESSamango monkeys in a South African forest spend more time feeding near the ground when human observers are present. Field researchers may serve as protection from predators such as leopards, according to a study published July 10 in Behavioral Ecology.

Scientists placed buckets of peanuts on the ground and at four different heights in trees, and measured how much the monkeys—which were already accustomed to human observers—ate in the presence or absence of people. When people weren’t watching, the monkeys demonstrated a “vertical axis of fear”—they foraged more at greater heights, presumably in an effort to avoid predation. But the presence of researchers skewed this axis, causing the monkeys to forage more evenly among the different heights. Human observation had little effect on the animals’ feeding at higher levels, probably because humans do not lessen the threat of eagles and other canopy predators. The authors noted that their results are an important reminder that the behavior of “habituated” animals may be markedly impacted by the presence of humans.

“If observer presence can alter the way in which animals forage and use space, this has obvious implications for observer-led studies of vigilance, trade-offs and predator-prey interactions,” study leader Katarzyna Nowak, a junior fellow at Durham University, told Mongabay. 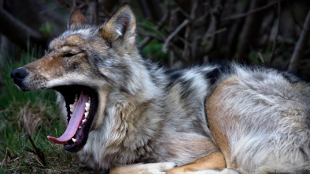 FLICKR, NPS, NEIL BLAKEContagious yawning may be an indicator of deep-rooted empathy among certain mammals. Observations of a wolf pack in a Tokyo zoo revealed that wolves, like humans and other primates, yawn in response to one another. The results were published last month (August 29) in PLOS ONE.

The same University of Tokyo team previously showed that domestic dogs yawn in response to their owners’ yawns, but it was unclear whether this was a result of adaptation to living with humans or selective breeding by humans of particularly sensitive dogs.

“The wolf study indicates that the previous findings in dogs relate to general mammalian empathy,” Emory University’s Frans de Waal, who was not involved in the study, told Wired. “If wolves show the same reactions amongst themselves, this confirms the idea that basic empathy is a mammalian characteristic, found in animals from mice to elephants.”

Interestingly, the contagious yawn responses were stronger when the wolves could see one another yawn, and were correlated with the strength of social bonds. Females were more likely to yawn contagiously than males, consistent with evidence that females are more acutely attuned to social cues. The precise meaning of the yawn itself, however, continues to elude scientists. 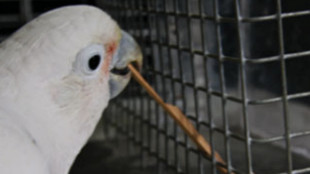 PROC ROYAL SOC B, ALICE AUERSPERGThe Goffin’s cockatoo (Cacatua goffiniana) is not only an affectionate and playful pet, but exhibits impressive intelligence. A study published this week (September 3) in Proceedings of the Royal Society B showed that Goffin’s cockatoos can make and use tools, and can learn this behavior by watching conspecifics.

A team of researchers from the University of Vienna and at Oxford had previously reported that “Figaro,” a captive male cockatoo, had learned to bite off a splinter from a piece of wood and use it to retrieve a nut placed just outside his cage. In this latest work, the team tested whether six other birds could do the same after watching Figaro apply his useful trick. Three of the six birds that watched Figaro learned to use a similar tool, but in a different way, suggesting that “result emulation rather than high-fidelity imitation is the most plausible transmission mechanism,” the authors wrote in their paper.

Small Indonesian islands are the cockatoo’s natural habitat, and this environment may explain the evolution of their remarkable intelligence, lead author Alice Auersperg told New Scientist’s Zoologger. “They are in a special situation with unpredictable resources," she said. "Whether they use tools or not in the wild is the big question.” 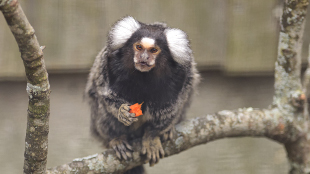 FLICKR, ERIC KILBYHumans aren’t the only primates who can imitate one another’s on-screen moves. Instead of dancing along to music videos, wild marmosets (Callithrix jacchus) in Brazil learned to open a box containing a sweet chunk of banana. Researchers reported this result in the September issue of Biology Letters.

In the study by scientists from the University of Vienna, only 13 percent of the marmosets were able to open the box. But those that did succeed appeared to closely follow the movements of the captive monkeys in the videos, suggesting they had learned by viewing. According to the study’s authors, this is the first demonstration that wild animals can learn by watching videos of their peers.

Because marmosets live in territorial family groups, they’re inclined to show aggression toward individuals from unfamiliar groups. But this didn’t happen when the monkeys watched the videos. “If they really thought this was an unknown individual, at least we would have seen more agonistic or fearful reactions,” lead author Tina Gunhold of the University of Vienna told Live Science. “[But] they were not scared of the video.”

Lydia Hopper of Chicago’s Lincoln Park Zoo who was not involved in the research told Live Science that learning from the video was “a hard task” for the marmosets. “Even young human children take time and need experience with videos and 2-D images to learn how to interpret them and how to understand them,” she said.