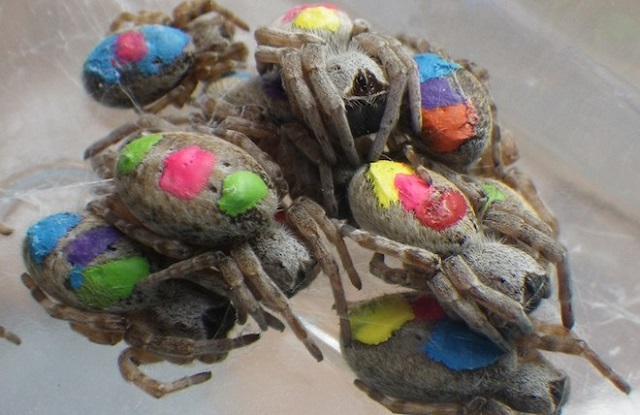 Living with a familiar crew tends to strengthen spiders’ personality traits, according to a study published this week (March 26) in the Proceedings of the Royal Society B. Kate Laskowski of the Leibniz-Institute of Freshwater Ecology and Inland Fisheries in Berlin and Jonathan Pruitt of Pittsburgh University studied social spiders (Stegodyphus mimosarum) that were allowed to mingle amongst themselves for up to four weeks.

Laskowski and Pruitt found that certain individuals in socialized groups were more likely to behave boldly in the face of simulated predators or more aggressively toward prey. Their findings support the social niche specialization hypothesis, which posits that animals living together tend to differentiate their behaviors to prevent competition among members and to increase overall group productivity. 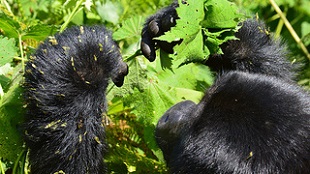 FLICKR, MEGAN COUGHLINNon-human primates have been known to feast on insects, but this behavior has been difficult to understand and to track in the wild. Now, researchers led by Fadi Bittar of the Aix-Marseille University in France have gained further insight into apes’ insect-eating habits by using DNA barcoding analysis,  according to a study published today (March 27) in Scientific Reports.

The researchers analyzed nine stool samples from gorillas, bonobos, and chimpanzees, identifying 106 different species from 32 families of insects, including flies, beetles, butterflies, moths, mosquitoes, and termites. Surprisingly, the researchers did not find any ant or bee species within the samples, although they noted that could have been a result of DNA degradation in primate guts.

“Compared with behavioral observations and/or analysis of trail signs in ape feces, we found many previously unknown insect families that are consumed by African great apes,” the researchers wrote in the paper. 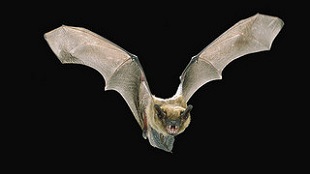 FLICKR, ANGELL WILLIAMSMale bats use unique ultrasonic calls to warn other bats in their vicinities away from food that they’ve “claimed,” according to a study published today (March 27) in Current Biology. While a team led by Genevieve Wright of the University of Maryland was studying audio recordings of big brown bats (Eptesicus fuscus), the researchers found a call that didn’t resemble typical echolocation.

They dubbed the call “frequency-modulated bout” (FMB). In controlled experiments, the team found that 96 percent of the time, a bat sending an FMB would claim and eat a tethered mealworm, while another bat foraging nearby would move away from the food source.

“When two males flew together in a trial, it was not uncommon for each bat to emit FMBs,” Wright said in a statement. “We found that the bat emitting the greatest number of FMBs was more likely to capture the mealworm.”

Female bats don’t appear to send FMB, which the researchers speculated may be because they exhibit different foraging behaviors than males. 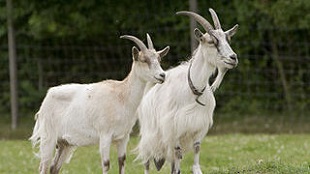 WIKIMEDIA, MATS LINDH Goats are better at solving complex problems than previously thought and can remember solutions for nearly a year, according to a study published this week (March 26) in Frontiers in Zoology.

Researchers led by Alan McElligott of Queen Mary University in London trained goats to collect a food reward from a box using a complex series of steps. The animals had to first pull a lever and then lift it in order to get the morsel. It took the goats an average of 12 tries to figure it out. After 10 months, the goats were able to remember the sequence within two minutes. Some of the goats watched others demonstrate the task, but those that observed demonstrators didn’t fare any better than those that did not. The researchers suggested that goats might prefer to learn on their own.

“Our results challenge the common misconception that goats aren’t intelligent animals,” McElligot said in a statement. “This could explain why they are so successful in colonising new environments.” 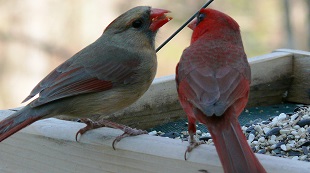 WIKIMEDIA, KEN THOMASSome pair-mated songbirds often sing duets loud enough to warn competitors to stay out of their territories, a trait thought to be more common among tropical birds. David Logue from the University of Puerto Rico and Michelle Hall of the University of Melbourne in Australia have shown that duetting is incompatible with migrating. Their work was published this month (March 11) in the Proceedings of the Royal Society B.

The researchers constructed a phylogenetic tree including 372 species of songbirds and found that 16 percent of all birds (and 44 percent of songbirds) were duetters—a higher estimate than once thought. Duetters were also unlikely to be migrators. The researchers noted that many migratory birds change mates yearly, while non-migratory birds may form pairs that last years. They speculated that long-term relationships make it advantageous from an evolutionary standpoint to develop cooperative behaviors. 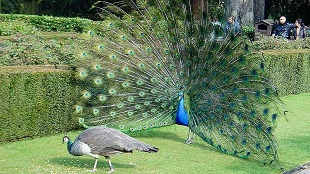 WIKIMEDIA, TOASTYKENPeacocks like to strut their elaborate tail feathers to attract female peahens, but they also fake sex sounds to deceive females about their sexual prowess. Males make a distinctive hoot just before they mount females, loud enough to be heard by out-of-eyesight neighbors.

Roslyn Dakin and Robert Montgomerie of the University of British Columbia wondered why peacocks made such loud sounds. “It’s much louder than it needs to be to communicate with just the female that the male is trying to mate with,” Dakin told the BBC.

The researchers found that peacocks made the calls even when alone, and that the sounds attracted peahens. They described the behavior in a study published this month (March 5) in The American Naturalist. Up to 60 percent of males studied made the sound, Dakin and Montgomerie reported, and these birds tended to be the most successful breeders.