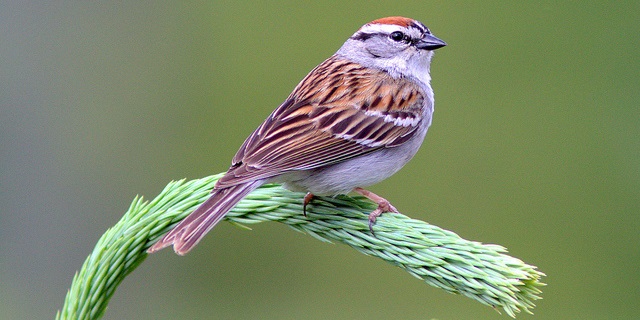 Male chipping sparrows (Spizella passerine) will trespass on the territory of their neighboring rivals to help them defend against invaders, but only if the newcomers are a bigger threat than the current neighbor, according to a paper published this week (February 26) in Biology Letters.

University of Massachusetts Amherst graduate student Sarah Goodwin and her advisor, Jeffrey Podos, played chipping sparrow songs on loud speakers near a fake sparrow rival. They found that male birds responded to a rival with a faster trill rate, indicating increased aggression. About 20 percent of the time, neighboring sparrows would come to the aid of the defending sparrow. But they only intervened when the trill rate of the defending neighbor was slower than their own, and when the intruding rival’s was faster than their current neighbor’s. Goodwin and Podos dubbed this the “dear enemy” strategy....

“We interpret this to mean that the ally not only prefers having a lousy neighbor, but also specifically does not want that lousy neighbor replaced by a more serious competitor," Podos said in a statement. 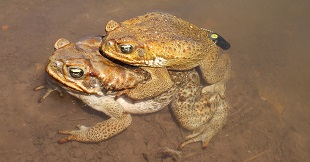 UNIVERSITY OF TECHNLOGY SYNDNEY, TIM DEMPSTERRhinella marina) appear to be adopting new behavior patterns to acclimate themselves to northern Australia’s deserts. Native to tropical climates and normally nocturnal, cane toads in these drier environments are hydrating in manmade reservoirs during the day, according to a paper published in Biology Letters this week (February 26).

Study coauthor Jonathan Webb of the University of Technology Sydney and his colleagues fitted 20 toads with acoustic fish tags in two reservoirs in the Tanami desert. Underwater listening stations only pick up the signals these transmitters emit if the devices are submerged. When toads hopped out of the water, the signal was lost. The team found that toads visited the two reservoirs during the day, predominantly in the morning.

"No one has ever put fish tags on amphibians before to study their activity and what we found shows amazing behavioral flexibility on the part of these toads," Webb said in a statement. 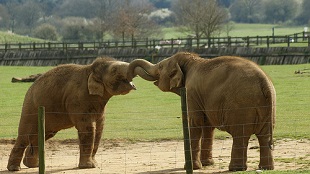 FLICKR, SPENCER WRIGHT Elephants, long considered empathetic animals, reassure one another in stressful situations, according to a paper published in PeerJ this month (February 12). Joshua Plotnik, a lecturer in conservation biology at Mahidol University in Thailand and CEO of the nonprofit Think Elephants International, and Frans de Waal, professor of psychology at Emory University, studied 26 captive Asian elephants at an elephant park in northern Thailand.

Plotnik observed the elephants periodically for more than a year during both stressful and stress-free times. In stressful situations, such as when a snake, a dog, or an unfriendly elephant approached, the elephants flared their ears, erected or curled out their tails, and trumpeted or roared as a distress signal. Other elephants reacted by “adopting the same emotion,” Plotnik told ScienceNow, “just as we do when watching a scary movie together. If an actor is frightened, our hearts race, and we reach for each other’s hands.”

Plotnik noted that a potential limitation of the study was that it was conducted on captive elephants. "This study is a first step," he said in a statement. "I would like to see this consolation capacity demonstrated in wild populations as well." 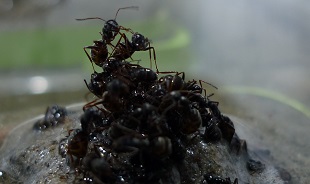 EUREKALERT, JESSICA PURCELLWhen trying to escape flooding, ants join together to build rafts out of their own bodies, placing their vulnerable brood—young larvae and pupa—at the bottom of the formation, according to a study published this month (February 19) in PLOS One. The prized queen ant, meanwhile, is sequestered in the middle of the raft.

The University of Lausanne’s Jessica Purcell and her colleagues collected flood ants (Formica selysi) from the banks of the Rhone River in Switzerland. In the lab, the researchers flooded the transplanted ants, and found that the babies-on-the-bottom strategy resulted in a relatively high survival rate for both worker ants and the brood.

“The larvae and pupae are buoyant and not entirely submerged,” Purcell told National Geographic’s Weird and Wild blog. “They are also quite fat, which may be one characteristic that helps buffer them against cold-water conditions.” 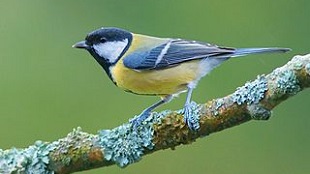 WIKIMEDIA COMMONS, LUC VIATOURGreat tits are able to remember where other birds have stashed food for up to 24 hours, according to a study published in Behavioral Ecology and Sociobiology last month (January 10). In a laboratory setting, Anders Brodin and Utku Urhan of the University of Lund in Sweden allowed Great tits (Parus major) to watch where another species, marsh tits (Poecile palustris), stored sunflower seeds. They found that as soon as one hour later, Great tits had remembered where the food was stored. And the birds retained such memories for up to a full day.

Other birds, such as jays and crows, are known to also have good food-storage memories, but unlike them, Great tits don’t cache their own food. The researchers suggested that thieving birds memorize food locations differently than hoarders do.

“The ability of observational memorization could be more important for non-hoarders than for hoarders, as this could increase their chances of survival especially when foraging conditions are bad,” Brodin said in a statement. “For example, after a blizzard, the access to stored food may be the difference between life and death.”