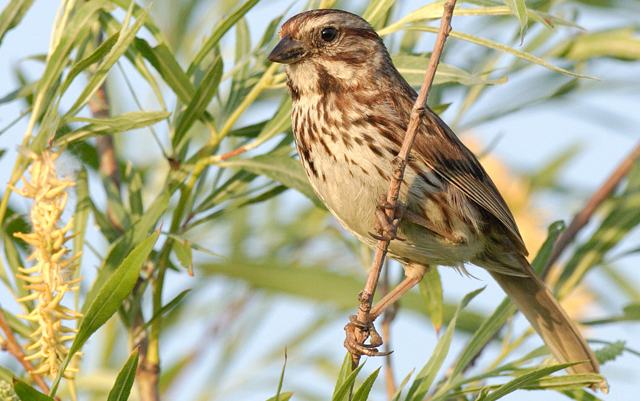 Scientists understand the signs that predict aggressive behavior in songbirds fairly well, but sometimes signals fall short—a bird might behave in a way that suggests aggression is on its way, but never act. Researchers from the University of Washington in Seattle have now shown that individual song sparrows (Melospiza melodia) are consistent in how honest their signals are over time and that personality seems to influence whether signals actually forecast aggression. The work was published this month (December 4) in Proceedings of the Royal Society B.

The team recorded songs from 69 wild male song sparrows in Seattle, and then played the songs back to the birds in a move aimed to generate aggression. The researchers assigned each bird scores for aggressive signaling and behavior and compared the scores of individuals over multiple tests over several seasons. They found that the degree...

Understanding honest signaling in songbirds could lead to greater understanding of animal behavior. “I think it’s highly likely that behaviors one can define in song sparrows can be identified in other birds, and other animals as well,” Jeremy Hyman of Western Carolina University in Cullowhee, North Carolina, told Nature News. 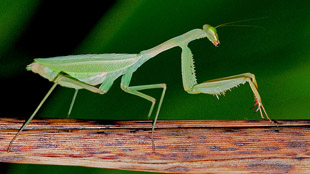 FLICKR, GARYNZThe only species of praying mantis native to New Zealand (Orthodera novaezealandiae) is in danger. Researchers from the University of Auckland have shown that native males are preferentially attracted to females from an invasive species—the springbok or South African mantis (Miomantis caffra)—that cannibalize the native males when they try to mate. The work was published last month (November 27) in Biology Letters.

“Females simply lunge and attack males as they get within striking distance and start consuming them immediately,” Holwell told Science News. “Sometimes they start at the head; sometimes they hold them widely in both arms and start in the middle, looking like they are eating a cob of corn.” 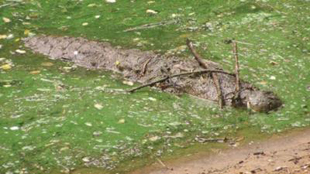 EUREKALERT, VLADIMIR DINETSThe first evidence for tool use in reptiles is on the books. Mugger crocodiles (Crocodylus palustris) and American alligators (Alligator mississippiensis) use sticks and twigs to lure and prey on water birds, according to a study published in Ethology Ecology & Evolution last month (November 29).

“[The study] provides a surprising insight into previously unrecognized complexity of archosaurian behavior,” coauthor Vladimir Dinets of the University of Tennessee in Knoxville told The Telegraph.

Dinets first noticed bird-baiting behavior in crocodiles at Madras Crocodile Bank in Chennai, India. In order to systematically investigate the behavior, Dinets observed alligators at four sites in Louisiana for a year. The alligators regularly displayed sticks and twigs to water birds, but they were more likely to use the lures during nest-building season. Plus, at sites with an egret rookery nearby, the behavior was observed more often that at sites distant from the birds.

“It appears that they have really complex hunting methods, with advance planning, individual animals playing different roles, prey being driven into ambushes or into bait balls, and so on,” Dinets told Wired UK, “but these things are extremely difficult to observe and study.” 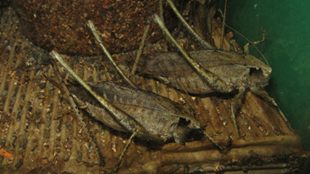 WIKIMEDIA, KENPEIMale katydids in the jungles of Malaysia make noise to attract mates. Some species chirp, while others trill. To make it easier for the females to find them, males that chirp synchronize with other males of the same species, which is a challenge amidst the cacophony of their habitats. Scientists from Karl-Franzens University in Austria have now demonstrated how chirping male katydids (Mecopoda elongata) are able to synchronize their calls, even in the presence of a trill that is much louder than their chirp. The work was published this month (December 4) in The Journal of Experimental Biology.

The researchers played a recorded chirp for solitary male katydids to join, then played a trill at increasing volume until the insects could no longer synchronize with the recording. “It turns out that the chirpers are able to tolerate a high noise level,” coauthor Manfred Hartbauer said in a statement. The researchers identified a specific frequency found in chirps, but not in trills, and showed that the sensitivity of the TN1 auditory neuron to this frequency increased in the presence of background noise.

“This [finding] is surprising because normally if you turn on a noise source, you have to increase the intensity of the signal in order to elicit a response in the neuron,” Hartbauer said in the statement, “but in this katydid it was the opposite way around.” 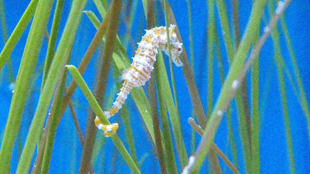 WIKIMEDIA, STICKPENSeahorses are notoriously slow swimmers, but scientists have shown previously that, in calm water, they have over 90 percent success catching their favorite snack—tiny crustaceans called copepods. This success rate towers over the 30 percent to 40 percent success rate of other fish, and is especially impressive given how fast copepods can swim to get away from predators—500 body lengths per second. Scientists from the University of Texas at Austin have shown that the unique shape of the seahorse’s head contributes to its success in snagging prey. The research was published last month (November 26) in Nature Communications.

Brad Gemmell and colleagues measured live 3-D movements of the dwarf seahorse (Hippocampus zosterae) and copepods (Acartia tonsa). At the same time, they measured the movement of fluid around the snouts of the seahorses. The researchers showed that the shape of the seahorse’s head only minimally disturbed the surrounding water, so the animal was able to use a pivot feeding technique, which combined a quick head movement with sucking the prey in, to bag its quarry.

“Once the seahorse gets within range the story is pretty much written, as far as the fate of the copepod goes,” Gemmell told National Geographic News.