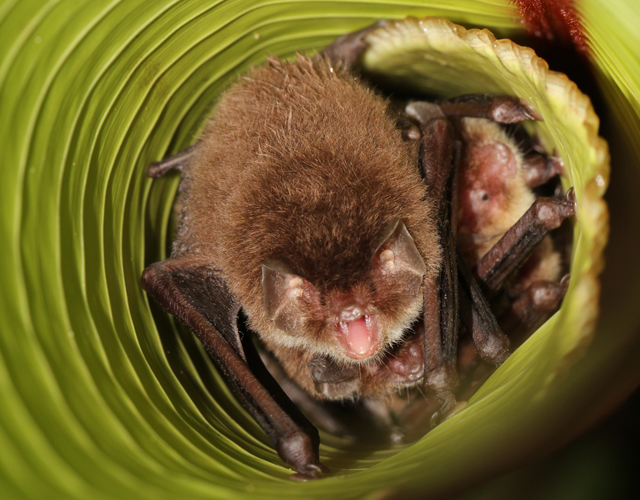 Spix’s disc-winged bats (Thyroptera tricolor) live in colonies in the unfurling leaves of tropical plants in South America. Gloriana Chaverri and Erin Gillam have now demonstrated that these bats’ choice of housing could be important for communication between group members, as the cone-shaped leaves amplify their calls. Their work was published this month (October 16) in Proceedings of the Royal Society B.

The researchers—based at University of Costa Rica and North Dakota State University, respectively—recorded bat calls in the wild and also collected cone-shaped leaves from Heliconia or Calathea plants, which the winged mammals typically inhabit as roosts. Chaverri and Gillam then played the signals back in the lab with a speaker positioned at the top or inside the bottom of the cone with microphone at the opposite end to record sound coming through the leaf. They found that calls played...

This “work on sound amplification by tubular leaves is a new and valuable contribution to the field of animal communication,” Mirjam Knoernschild of the University of Ulm’s Institute of Experimental Biology, who was not involved in the work, told Discovery News. But Terry Derting of Murray State University in Kentucky told Nature News that the paper’s extensions to the world outside the lab remain “strictly hypothetical.” 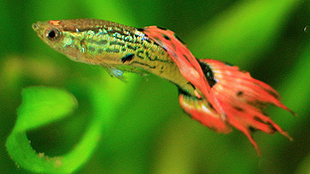 FLICKR, TARTARUGA33Researchers from Florida State University, Lake Forest College, and the University of Toronto have shown that wild male guppies with rare color patterns mate more and father more offspring than those with common color patterns. Their work was published in Nature this week (October 30) and presents the first evidence from a natural population that might explain how rare traits—favored for their novelty—can persist, but not become common.

The team studied three wild populations of guppies in tributaries of two Trinidadian rivers. For each group, the researchers collected and sorted males by color pattern, then re-released them in cohorts where males with rare color patterns were outnumbered three-to-one by commonly patterned males. About two weeks later, they collected the fish, allowed the females to have two broods in the lab, and then genotyped the parents and offspring. Unusually patterned males had two times more mates and offspring than the common males in the first brood, suggesting that females preferred to mate with rare males.

“This is one thing that can explain why organisms are so variable,” study coauthor Kimberly Hughes told the Los Angeles Times. “Sometimes, just being different, just being rare, confers an advantage.” 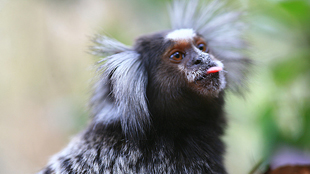 FLICKR, LASZLO ILYESHuman verbal exchanges—in which one party typically waits for the other to stop speaking before chiming in—were previously believed to be unique to select primates. But now Princeton University researchers have shown that common marmosets (Callithrix jacchus) also take turns during vocal communication, in a paper published this month (October 17) in Current Biology.

The research team, led by Asif Ghazanfar, chose marmosets because they vocalize frequently—rather than communicating via gestures like chimpanzees—and are prosocial. The researchers put pairs of marmosets on opposite sides of an opaque curtain and recorded the animals’ vocal exchanges. The researchers found that marmosets regularly waited five to six seconds after their conversational partner finished vocalizing before responding. Some of the conversations lasted as long as 30 minutes, and the two marmosets did not have to be previously acquainted to converse.

The marmosets might have evolved to take turns in order to strengthen communication with their social clans. “If you’re out of sight of your group members and want to establish contact with another, you only know if you’ve established that contact if their response is contingent on your own,” Ghazanfar told BBC News.

Home on the reef 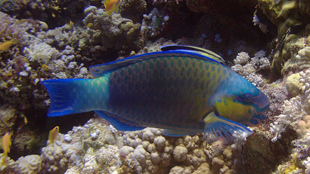 FLICKR, TIM SHEERMAN-CHASEAnimals usually settle where they can avoid predators, find food, and mate, but how they balance these three requirements to define home is not always clear-cut. Researchers from James Cook University in Australia carefully tracked three species of parrotfish over time and showed that once these fish reached sexual maturity, they stopped expanding their home ranges. Their work was published this week (October 30) in Proceedings of the Royal Society B.

The research team estimated the home ranges of 75 individual fish from three parrotfish species in the Great Barrier Reef. Juvenile fish—some as small as 10 millimeters—expanded their home ranges proportionally as they grew. But when the fish reached about 100 millimeters, their ranges no longer correlated with body size. The researchers suggested that the main reason for this change was the onset of sexual maturity.

For parrotfish, “large social groups exist with complex courtship and mating behaviors, and therefore it is beneficial to remain as close to a potential mate as possible,” coauthor Justin Welsh told BBC Nature. “The fact that a fish’s social environment can have such a dramatic affect on their home range size opens up endless possibilities for new research,” he added.

EUREKALERT, ELAINIE MADSENPrevious research into contagious yawning (CY) has suggested there are several species that “catch” yawns from others—including humans, dogs, non-human primates, and parakeets. Research has also connected CY with empathy any mimicry, though its origins and benefits remain controversial. Researchers from Lund University in Sweden have now shown that chimpanzees (Pan troglodytes verus) can catch yawns from humans, and that their susceptibility to CY increases with age. Their work was published this month (October 16) in PLOS ONE.

A familiar caretaker and an unfamiliar person modeled behaviors to 33 orphaned chimps, both infants and juveniles. The humans opened their mouths in a gape, wiped their noses, and yawned as they gently played with the chimps. CY independent of the familiarity of the model was observed in the juvenile chimpanzees, but not in the infants. Neither nose wiping nor gaping seemed to be contagious.

“We’re more likely to empathize with those we’re familiar with, so we really expected the adoptive mother of the chimps would be able to provoke more contagious yawning, with the younger chimps in particular,” coauthor Elainie Madsen told the Los Angeles Times. “But there was no such thing, which is puzzling.”

Correction (November 1): This article has been corrected to clarify the experimental procedures from the wild guppy study. The original version mistakenly gave the impression that female guppies had laid eggs, when in fact they are live-bearing fish. The Scientist regrets the error.