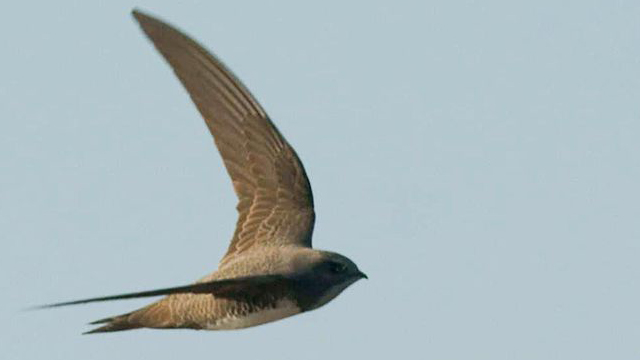 The Alpine swift (Tachymarptis melba) is capable of staying airborne for more than six months, according to researchers at the Swiss Ornithological Institute. The study, published in Nature Communications today (October 8), provides the first evidence of a terrestrial bird flying for extended periods of time and suggests that the swifts must sleep in the air.

At a Swiss breeding facility, six Alpine swifts were fitted with tags to record their locations and activity as they departed for wintering grounds in Africa. The following year, three of the six birds were recaptured and the researchers recovered seven months of data detailing the birds’ activity and movement. By analyzing acceleration and location data, the scientists discovered that the birds had periods where they demonstrated minimal activity and held the same body position, but were still moving, suggesting that they were gliding while sleeping....

As it is already known that swifts forage and eat while airborne and there is some data to suggest they can also roost in the air, the new research implies “that all vital physiological processes, including sleep, can be perpetuated during flight,” the authors wrote. 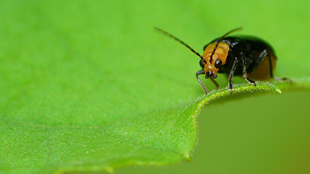 FLICKR, CONIFERCONIFERScientists who study insect behavior might want to start paying attention to the weather on days they are running experiments. A paper published this month (October 2) in PLOS ONE showed that atmospheric pressure can affect courtship and mating behavior in at least three species of insects.

The researchers, from the University of São Paulo in Brazil and the University of Western Ontario in Canada, subjected cucurbit beetles (Diabrotica speciosa), true armyworm moths (Pseudaletia unipuncta), and potato aphids (Macrosiphum euphorbiae) to constant pressure and increases or decreases in pressure meant to simulate natural weather conditions. While falling and rising pressure affected each species differently, all three types of insect showed changes in courtship and mating behavior as compared to when pressure was stable. Cucurbit beetles responded sluggishly to female pheromones when pressure dropped, for example, but also mated very quickly. “It was as if they were trying to quickly reproduce before the rain came,” coauthor Maria Fernanda Peñaflor told ScienceNOW.

In contrast, changes in pressure (in either direction) reduced mating behavior in both the moths and aphids. Behavioral changes in insects due to atmospheric pressure were not a surprise to some scientists.

“For my lab, it’s almost become standard that when the weather is poor, we skip experiments for a few days,” entomologist Joop van Lenteren, emeritus professor at Wageningen University and Research Centre in the Netherlands, told ScienceNOW. 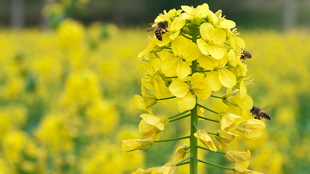 FLICKR, SAMYUEN1Diesel exhaust may disrupt the odor recognition process that honeybees use to find floral food sources, researchers from the University of Southampton in the United Kingdom reported last week (October 3). “This could have serious detrimental effects on the number of honeybee colonies and pollination activity,” said neuroscientist and study coauthor Tracey Newman in a statement.

For the study, published in Scientific Reports, the research team made a synthetic odor blend, containing eight volatile chemicals released by the oilseed rape flower to which bees are known to react strongly. The researchers then mixed this flower blend with diesel exhaust and showed, using gas chromatography-mass spectrometry, that two of the components of the flower odor, α-terpinene and α-farnesene, were undetectable in the presence of diesel exhaust. In order to pinpoint the cause of α-terpinene and α-farnesene depletion, the researchers exposed the flower blend to nitric oxide (NO) and nitrogen dioxide (NO2), two of the most reactive components of diesel exhaust, and observed similar decreases in α-terpinene and α-farnesene, suggesting that NO and NO2 are responsible for the depletion of the flower odor chemicals.

The team then taught honeybees to recognize the flower odor blend and exposed them to either the blend with all the components or a blend that was missing α-terpinene, α-farnesene, or both. The bees extended their proboscises in recognition of the odor blend less often when either α-terpinene or both chemicals were removed, suggesting that they would be less able to recognize floral scents that have been exposed to diesel exhaust.

James Nieh, a professor of biological sciences at the University of California San Diego who studies honeybee health, told BBC News that how pollutants affect pollinator health is a “largely unexplored question. Most research on such contaminants has focused on pesticides.” 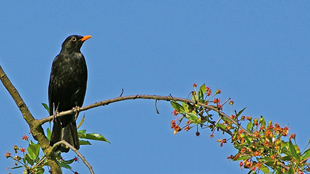 FLICKR, DANIEL JOLIVETLight cycles coordinate the timing of both daily and seasonal activities in birds, but according to a study published in Frontiers in Zoology last week (October 3), urban and rural European blackbirds (Turdus merula) responded to light at night differently. While both groups of birds released a similar amount of melatonin during summer and winter nights, rural blackbirds were more likely to be active in response to light than the urban blackbirds.

Researchers from the Max Planck Institute for Ornithology in Germany exposed groups of urban and rural blackbirds to two light treatments, one with a dark night and one with much more light, equivalent to what urban birds experience in the constant glow of city lights. When they tested melatonin levels in the birds, the scientists found that light at night decreased melatonin secretion in both urban and rural birds. However, rural blackbirds responded to these changes by increasing locomotor activity more than urban blackbirds did.

“Here we show that light-at-night can reduce melatonin release in European blackbirds, and we believe that this finding offers new insights in the mechanisms through which urbanization affects biological rhythms of songbirds, and potentially, of other organisms,” the authors wrote in the paper. 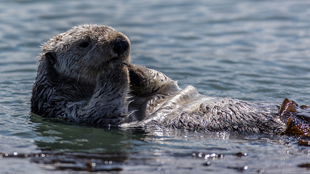 FLICKR, MIKE BAIRDTool use has been extensively studied in terrestrial animals, but aquatic animals also use tools. Janet Mann and Eric Patterson of Georgetown University, in a review published this week (October 7) in Proceedings of the Royal Society B, detail what is known about tool use in aquatic animals.

“Like land-based tool users, aquatic animals tend to find tools on the substrate and use tools during foraging,” the authors wrote in the review. “Tool use (or potential tool use) occurs in echinoids, crustaceans, gastropods, cephalopods, marine mammals and both ray-finned and cartilaginous fishes,” they continued. Mann and Patterson give several examples of tool use, including otters’ use of rocks as anvils to smash open prey and humpback whales’ use of bubbles as nets to encircle schooling prey.

The authors conclude that tool use is rare in aquatic animals, but “the absences of tool use among many aquatic organisms should not be viewed as a lack of ability, but rather a lack of need.” They emphasized the value of studying tool use in aquatic animals for “help[ing] us understand its adaptive value and evolution across all environments.”