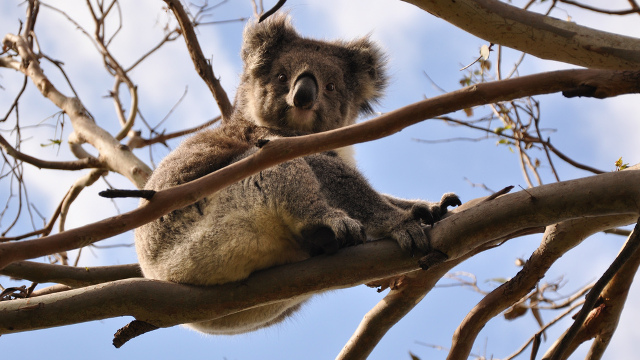 Where koalas live within their natural habitat range affects how they behave, researchers at Australia’s University of Queensland have found. Nicole Davies and her colleagues tracked 21 koalas (Phascolarctos cinereus) living in southwest Queensland, looking for differences among animals that lived at different distances from the area’s center. Overall, Davies’s team found that koalas living at the arid Western end of the natural range spent most of their time close to water sources, while their Eastern counterparts residing nearer to the temperate center varied more in their habitat use.

“The difference in home range movement patterns and resource use among the different koala populations shows that behavior changes with proximity to the arid edge of the koala’s range,” Davies and her colleagues concluded in their paper, published today (September 12) in Movement Ecology. “Changes in home range size and resource use...

How and why fish school 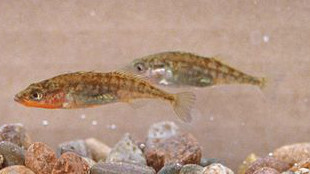 WIKIMEDIA, U.S. FISH AND WILDLIFE SERVICEWorking to understand the complexities of social behavior, scientists at the Fred Hutchinson Cancer Research Center in Seattle have mapped characteristics associated with how and why fish swim in schools to stretches of the three-spined stickleback (Gasterosteus aculeatus) genome. In a paper appearing online today (September 12) in Current Biology, the researchers present a quantitative trait locus analysis of schooling behavior between lab-reared hybrids of strongly schooling marine sticklebacks and weakly schooling freshwater varieties. Among other things, the team found that the tendency to school and a fish’s position within a school mapped to different genomic regions. They also identified a putative genetic link between schooling position and variation in the fish’s neurosensory lateral line.

The researchers suggested that understanding how and why fish school could help them pinpoint the genetic characteristics associated with similarly complex social behaviors in other animals, and even humans. “The motivation to be social is common among fish and humans,” lead author Anna Greenwood said in a statement. “Some of the same brain regions and neurological chemicals that control human social behavior are probably involved in fish social behavior as well.” 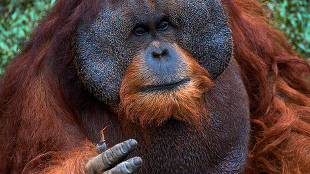 FLICKR, MIKAKUPlanning is widely considered a uniquely human trait, but other animals have also shown an ability to plan for future needs. Writing in PLOS ONE this week (September 11), the University of Zurich’s Carel van Schaik and his colleagues showed that male Sumatran orangutans (Pongo abelii) emit long calls, which females use to position themselves within earshot.

The researchers traveled to a peat swamp forest in Sumatra’s Gunung Leuser National Park to study this calling behavior. All told, they analyzed 1,169 long calls from 15 different flanged males. They also measured the male orangutans’ travel direction at the time of each call and at half-hour intervals until they reached their night nests.

Overall, van Schaik’s team found that long calls emitted at or near the night nest tended to indicate travel direction for the next day or so. “These results show that male orangutans make their travel plans well in advance and announce them to conspecifics,” the authors wrote in their paper. 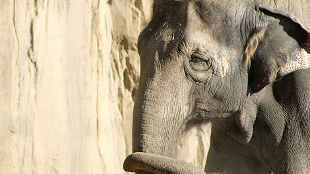 FLICKR, ARRANETIn the first reported study to investigate nighttime antipredator behavior among wild Asian elephants, researchers from the University of California, Davis, showed that the animals are able to distinguish playback growls of tigers, their occasional predators, from those of leopards, which pose a much greater threat. Writing in Biology Letters this week (September 11), Vivek Thuppil and his colleagues showed that in response to tiger-growl playbacks, the elephants retreated silently. When reacting to leopard-growl playbacks, on the other hand, the animals lingered, producing aggressive vocalizations and showing alert and investigative behaviors.

“Elephants can indeed discriminate between growls of these felid species differing in dangerousness,” Thuppil and his colleagues concluded in their paper.

Lucy Bates, a research fellow at the University of St. Andrews in the U.K. who was not involved in the study, told National Geographic that “it would pay for the elephants to recognize when a tiger is nearby so they can retreat, without wasting time by running away for every big-cat growl they hear.” 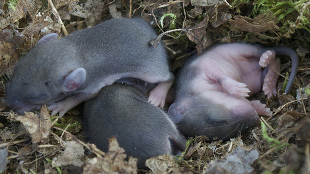 FLICKR, DISTANT HILL GARDENSMice raised in a stimulus-rich environment show less complexity in their social interactions than those reared in less-cluttered environments. That’s according to a study from researchers at Israel’s Weizmann Institute of Science, published earlier this month (September 2) in eLife.

To investigate high-order social interactions among mice, Elad Schneidman and his colleagues created an automatic system based on the idea of maximum entropy models from physics to track individuals within 17 small groups if mice over time. “We have found that the minimal models that rely only on individual traits and pairwise correlations between animals are not enough to capture group behavior, but that models that include third-order interactions”—the next step above pairwise dependencies for a given model—“give a very accurate description of the group,” Schneidman and his coauthors wrote in their paper.

Overall, the researchers found that mice raised in a complex and more populated environment spent significantly more time inside the large nest, compared with those reared in standard laboratory conditions, which spent more time outside of it. “Social interactions and correlated group behavior depend on past environment,” the researchers concluded.