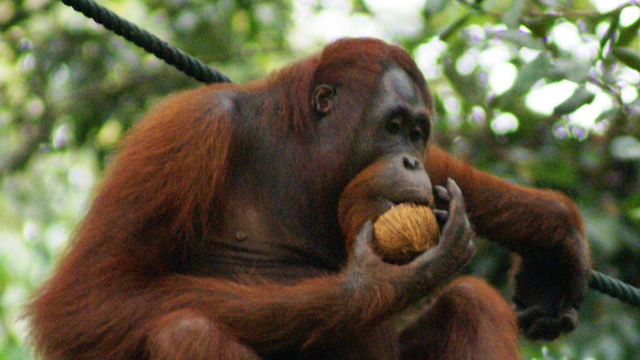 One of the defining traits of human existence, the capacity for forming autobiographical memories of life experiences, may be shared with orangutans and chimpanzees. According to research published last month (July 18) in Current Biology, our primate cousins can quickly remember past events and draw on those memories, up to 3 years later, to perform simple behavioral tasks.

Researchers led by Gema Martin-Ordas, a comparative psychologist at Aarhus University in Denmark, devised a memory test for four orangutans and eight chimpanzees at the Leipzig Zoo in Germany. The apes watched as Martin-Ordas placed a banana on a platform outside of their cages, which they could only reach with a long stick. The animals then watched as Martin-Ordas hid the stick, as well as a shorter stick, in two different locations. The animals were released and had to find the correct tool to fetch the banana,...

“Three years is a remarkably long time to draw on a memory—not just for animals, but for us. It’s breathtaking,” Jonathon Crystal, a comparative psychologist at Indiana University in Bloomington, who was not involved in the study, told ScienceNOW.

However, Crystal and others are not ready to concede that the experimental results mean that orangutans and chimpanzees have autobiographical memories. Martin Conway, a memory researcher at City University London, told ScienceNOW that he thinks the apes have “moment-by-moment episodic memory,” but that he does not see evidence for “cued recall.” 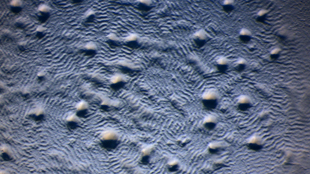 Many species coordinate social activities, such as hunting for food, via chemical agents that freely diffuse through the soil. But such open communication allows for eavesdropping by potential prey, warming them of potential attacks. So some species, such as Myxococcus xanthus, have evolved a more discrete means of communication. Researchers led by Manfred Auer, a structural biologist at Lawrence Berkeley National Lab, tapped into Myxococcus’s network of secreted microbial messages using 3-D electron microscopy. Their findings, published last month (July 15) in Environmental Microbiology, suggest that Myxococcus communicate by exchanging chemical cues through a series of nanometer-scale vesicle chains that physically connect cells to one another.

The thread-like connections between cells had been observed previously, but were dismissed as debris left over from procedures used to prepare bacterial samples. Auer and colleagues examined biofilms composed of Myxococcus with 3-D focused ion beam scanning electron microscopy, tracing the filamentous structures, which were 30 to 60 nanometers wide and 3 micrometers long, from cell to cell. An analysis of molecules found inside the structures revealed two proteins, Tgl and CglB, which are used by other bacteria for diffusion-type communication.

Auer told Wired Science that he believes Myxococcus use their network of pipeline-like connections to hunt as a superorganism, similar to how wolves track prey in a pack. “We think that this is sort of a way of stealth communication,” Auer told Wired, “and we think we might have a drug target for knocking out their communication system.” 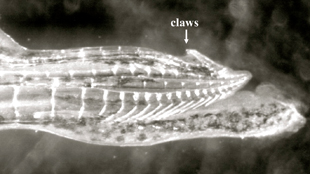 Claws at the tip of guppies' penis-like protrusions may help males grasp onto unreceptive females.LUCIA KWAN

To investigate the gonopodium claws’ function, Lucia Kwan, an evolutionary biologist at the University of Toronto, and colleagues shaved the claws off a group of guppies. The “declawed” guppies transferred only a third as much sperm to unreceptive females as a group of intact peers, while both groups of males deposited the same amount of sperm into willing partners. These observations led the researchers to conclude that the claws grasp onto the genital pores of females prior to insemination.

“[The gonopodium] has evolved to benefit males at the expense of females, especially when their mating interests differ,” Kwan told Wired.UK. “This provides support that this important selective force is behind an evolutionary pattern that evolutionary biologists have been trying to unravel for over a century.” 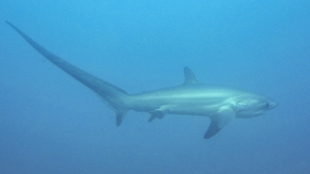 As if being a fast moving killing machine with razor-sharp teeth wasn’t enough, the thresher shark uses a scythe-like fin to whip schools of fish and gobble up its stunned victims. Though it has long been suspected that the thresher shark uses its tail, which makes up half the length of its body, as a hunting weapon, no one had captured footage of the behavior until now. Marine biologists, led by Simon Oliver at the University of Liverpool, filmed the pelagic sharks using their long tails to stun and eat sardines off the Pescador Islands in the Philippines. The team published their findings July 10 in PLOS ONE.

Oliver told BBC News that the 60 or so tail-slaps he and his colleagues filmed while scuba diving happened so quickly that they were difficult to track with the camera. “It’s a cross between a bull whip and a medieval war machine,” Oliver, founder of the Thresher Shark Research and Conservation Project, told the BBC. “It’s extremely violent, extremely quick, and it’s incredible to observe.”

The researchers slowed-down the footage and could see the 4-meter-long sharks accelerating through the water as they approached schools of sardines. The sharks then stalled themselves by pulling their pectoral fins together and dipped their noses while whipping their tails up and over their heads into the groups of fish. The researchers believe that the tail-slaps are powerful enough to create underwater shockwaves that stun fish so that sharks can easily capture and eat them. Though some predators such as killer whales and dolphins occasionally use their tails to hunt, Oliver told LiveScience that his team never saw the thresher sharks hunt without their tails. 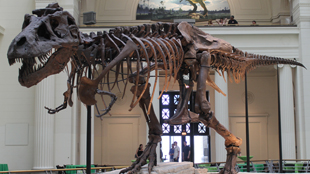 Tyrannosaurus rex may have hunted as well as scavenged.WIKIMEDIA, CONNIE MA

Nearly every Hollywood depiction of the Tyrannosaurus rex invites viewers to imagine the enormous dinosaur tracking down helpless prey and shredding them to pieces. However, no direct evidence has validated the image of T. rex as a cold-blooded killer, and some scientists have speculated that the dinosaur was actually a scavenger. Now, research published July 15 in the Proceedings of the National Academy of Sciences presents direct evidence that T. rex did indeed hunt live prey.

Paleontologists working in the Hell Creek Formation in South Dakota found a T. rex tooth embedded between the vertebrae of an herbivorous duck-billed hadrosaur tail. Though bits of T. rex teeth, as well as evidence of bites and scrapes attributed to T. rex attacks, have been found in other dinosaur bones, there has been no way to tell if the damage was done as a result of hunting or scavenging.

The recently discovered T. rex tooth was surrounded by bone that clearly grew after the tooth had sunk in, indicating that the hadrosaur was bitten by the T. rex but managed to escape and died some time later. “It’s a smoking gun,” study co-author Bruce Rothschild, a paleopathologist at the University of Kansas in Lawrence, told Nature. “We finally have Tyrannosaurus rex caught in the act.”

However, the new findings don’t mean that the T. rex only ate food that it hunted. “I’ve long argued that Tyrannosaurus rex was an opportunist like a hyena, sometimes hunting and sometimes scavenging,” Jack Horner, a paleontologist at the Museum of the Rockies in Bozeman, Montana, who was not involved in the study, told Nature. “This provides no evidence to the contrary.”