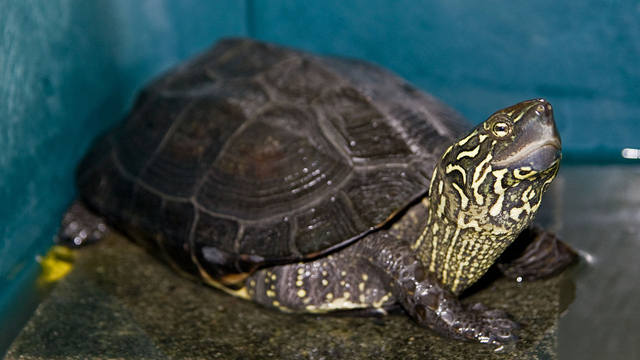 Some reptile embryos may have more control over their fate than previously thought. According to a study published in Biology Letters last month (June 12), Chinese three-keeled pond turtles (Chinemys reevesii) shift position within their eggs to find the optimal temperature—a move that could determine their sex.

“Our results suggest that animals may actively select their own destiny even at the very early stage of...

Du also told Nature that the finding could extend to other reptiles and even birds, provided there is enough space inside the egg for appreciable temperature variations. 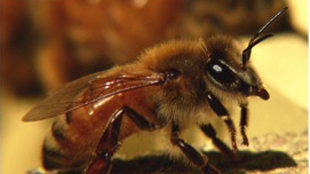 Just as humans prefer to shake with their right hands, honeybees use their right antennae to tell friend from foe, suggesting an asymmetry brain function. A study published last month (June 27) in Scientific Reports found that when pairs of approaching bees from the same hive interacted with just their right antennae, the interactions began more quickly and ended positively, with an exchange of fluids via unfurled tongues. Hive mates that interacted solely with their left antennae responded more negatively, by arching their backs to expose jaws and stingers to the other bee. When bees from different hives were paired, right-antennaed bees quickly became aggressive, as might be expected when meeting a stranger. Left-antennaed bees, on the other hand, were slow to respond and showed less aggression, an ostensibly inappropriate response.

Previous research had suggested that honeybees use their left and right antennae to attend to different types of sensory cues, but this is the first report of an asymmetry in the use of antennae related to social communication. Honeybee antennae are covered with a dense array of sensilla, microscopic hair-like protrusions that convey sensory information to the brain. Right antennae have more sensilla that are tuned to olfactory cues, which play a key role in social interactions.

“The idea is that asymmetries allow the brain to have more area for processing complex information,” Julie Mustard, a honeybee physiologist at Arizona State University not involved in the study, told ScienceNews. 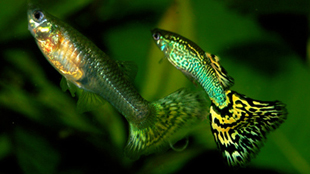 Male Trinidadian guppies (Poecilia reticulate) don’t let a little thing like death prevent them from becoming fathers. Though male guppies’ 3–4-month life spans are much shorter than the female average of 2 years, their sperm can survive inside tiny sacs in female ovaries for up to 10 months. Long-term sperm storage benefits both sexes: males can sire offspring for up to two generations after they die, and females can reproduce even when mates are scarce. According to a study published last month (June 5) in the Proceedings of the Royal Society B, up to a quarter of all guppies are sired by dead males.

Females of many species—including ants, bats, and whale sharks—can fertilize eggs with stored sperm, resulting in offspring, but until now the phenomenon has been restricted to laboratory experiments. “This is the first study to my knowledge that looks at the reproduction of dead and live males in a wild population,” lead author Andrés Lopez-Sepulcre, an evolutionary biologist at The École Normale Supérieure de Paris, told LiveScience.

The authors also state that the guppies’ posthumous reproductive strategy could play an important role in sustaining genetic diversity in natural populations. Through the accumulation of genetically diverse sperm, females could increase the likelihood of producing offspring adapted to a wide variety of environmental conditions. 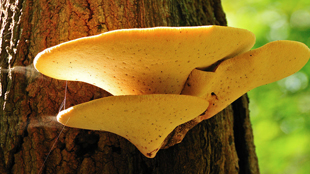 Spores drift off the left side of mushrooms clinging to a tree.FLICKR, GLENN HANSON

Thousands of fungal species launch their microscopic spores into the air through hundreds of elaborate structures that resemble high-power water cannons. The structures eject the spores with the acceleration of thousands of Gs—among the fastest projectiles in nature—in order to escape a several millimeter-thick layer of stagnant air that surrounds their spore-producing fruiting bodies. A paper published in the Journal of the Royal Society Interface last month (June 19) found that the central mechanism of the spore shooting apparatus, called an apical ring, works like an O-ring, a type of flat, flexible gasket used in motor engines.

The researchers found that the shape of the apical ring is critical to achieving such high-velocity spore ejection. However, they were surprised to find a wide diversity of apical ring and spore sizes and shapes among various species. These characteristics were so diverse, in fact, that the researchers suggest their use as factors for identifying species and making inferences about the evolutionary relationships among species.

To test the efficacy of spore dispersal for the various designs, the researchers computed the maximum launch velocity for 45 fungal species given the spore diameter and the apical ring’s length, width, and thickness. Despite the large morphological diversity, launch velocities were found to be within 2 percent of the optimum for more than 90 percent of the species. 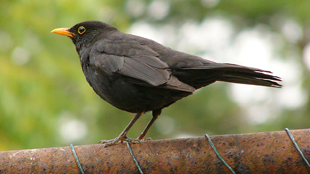 The bright lights and bustling streets of the big city create for a fast-paced lifestyle—and not just for humans. City-dwelling blackbirds get up earlier and stay active longer than their forest brethren, likely due to altered circadian clocks, according to study published last month (June 5) in the Proceedings of the Royal Society B.

Researchers attached tiny transmitters to the legs of European blackbirds (Turdus merula) living in Munich, Germany, as well as those living in a nearby forest. The activity-tracking devices indicated that city birds started their day nearly half an hour earlier and were active for an extra 6 minutes into the night. The researchers then placed several birds taken from the city and the forest into sound- and light-insulated chambers to test whether differences in the birds’ activity patterns were due to physiological changes. The chambers were illuminated with a constant, dim source of light for 10 days so the birds would lose track of what time of day it was. At the end of the experiment, the urban birds took about 50 minutes less than forest birds to go through a full 24-hour cycle of activity. With no daylight cues, the city birds also experienced more irregular activity patterns than the forest birds.

The flexibility of the blackbirds’ biological clocks may make them more adaptable to urban environments, which are not as predictable as those in the wild, lead author Davide Dominoni, an ecologist at the Max Planck Institute for Ornithology, told Nature. Dominoni also told Nature that his group plans to test whether humans living in cities also have altered circadian clocks.