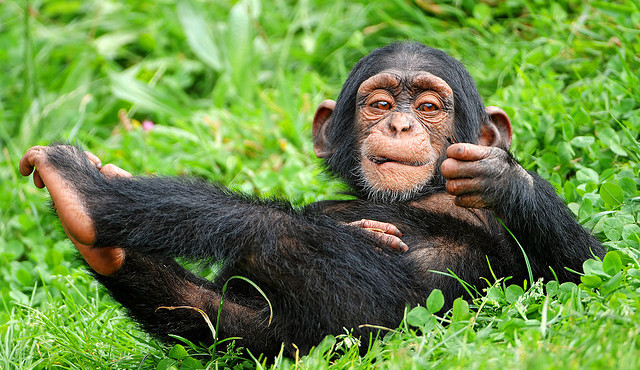 Researchers have long debated whether animals play fair. A new study out this week (January 14) provides evidence that chimps are indeed even-handed players—though not everyone is satisfied.

In the study, published in the Proceedings of the National Academies of Science, researchers adapted an economic game—called the Ultimatum game— to test fairness in chimps. In the game, a “proposer” chimp offers a “responder” chimp one of two colored plastic tokens—one color means splitting a banana equally, while the other means an unequal split, with the proposer chimp taking 5/6s of the banana. In the game, if the responder chimp accepts the offered token, the responder can turn it in to a researcher for the agreed upon shares of the banana. But, if the responder rejects the token offered—perhaps if they realize they’re getting stiffed—neither chimp gets any banana.

My, what a strong jaw you have 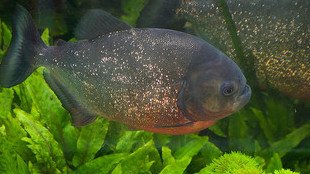 FLICKR, JOY TEKPiranha, the notoriously voracious fish, can bite with a force 30 times their weight, according to a paper published last month (December 20) in Scientific Reports. Researchers took measurements of the bite force of 15 live black piranha specimens. The hardest biting piranha could bite with nearly 320 Newtons (72 pounds) of force, though it weighed only 1.1 kg (2.4 pounds). The authors said that the piranha’s powerful adductor mandibulae muscles and superior jaw leverage allow it to predate animals much larger than itself.

“While anecdotes of piranha-infested waters skeletonizing hapless victims are generally hyperbole, the effectiveness of their bite is not,” the authors wrote in the paper. They also used the modern measurements to estimate the jaw force of the ancient megapiranha, which lived during the Miocene epoch around 22 to 5 million years ago. The megapiranha was over three times as large as the black piranha, the authors estimate, and it could likely bite with 1240 to 4749 Newtons (279 to 1,068 pounds) of force. The megapiranha’s tooth structure and forceful bites would have allowed it to eat hard marine creatures like turtles and armored catfish, as well as limbs of large terrestrial mammals that waded into the water. 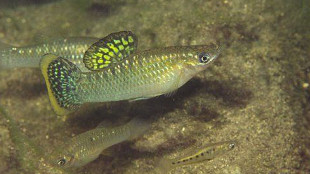 Poecilia mexicanaPUBLIC DOMAIN, JUAN MIGUEL ARTIGASHomosexual encounters are common across the animal kingdom, but present an evolutionary enigma since the behavior doesn’t appear to help increase an individual’s reproductive fitness—unless, perhaps, your potential, opposite-sex mates are into that sort of thing. Such is the case of the tropical freshwater fish Poecilia mexicana, whose males regularly engage in male-male foreplay to the delight voyeuristic females, according to a new study in Biology Letters. The same-sex spectacle adds an evolutionary boost to less desirable males by helping them attract and snag females.

In the study, researchers observed wimpy, dull-colored male fish “nipping” the genital openings of brighter, huskier males, an event that commonly precedes opposite-sex mating. Gawking females took note of the romp and indicated their newfound interest in the wimpy male by spending more time swimming close after the male-male encounter. The researchers suggest that such homosexual behaviors aren’t an evolutionary endpoint—at least for the wimpy male who might not otherwise attract females. 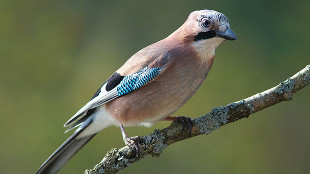 Eurasian JayFLICKR, LUC VIATOURAs crafty birds stash food in secret troves, they keep a lookout for pilfering rivals and relocate treasures if needed. But researchers are divided over whether or not the wily chirpers are just paranoid and stressed, or if they have the wherewithal to understand the cheating ways of other birds—a cognitive ability that’s rare in animals other than humans.

Many species of jays and crows stash food, but a recent study found that if birds hear or see a spying bird, they’ll dig up their buried treasure and seek another hiding spot that’s quieter and more secluded. In contrast, when a bird is staking out a rival, it is stealthy. “It shows that the pilferers are strategizing; they're aware that the other bird is listening, and if they're going to spy successfully, they need to be quiet,” Rachael Shaw, a University of Cambridge, U.K., behavioral ecologist who led the new study, told ScienceNOW. The finding suggests that the birds have the ability to know the other bird’s point of view, thus have a human-like “theory of mind,” Shaw argued.

But another group of researchers suggested in a subsequent study that the birds move their food around because they’re simply stressed by the presence of other birds and the possibility of having their food stolen—not because they’ve noticed a spy. Shaw and her research team cast doubt upon the theory by publishing the results of a stress test in which crows didn’t anxiously stash more food when their food was stolen by the researchers. Although the Cambridge researchers claim that the birds are more clever than stressed, they admit the results are still open to interpretation. 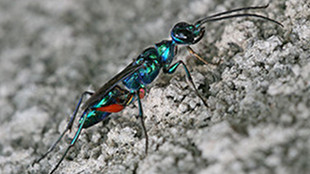 Emerald Cockroach Wasp.WIKIMEDIA, Muhammad Mahdi KarimParasitic wasp larvae slather cockroaches with antimicrobial substances as they eat them from the inside out, presumably to avoid infection, according to a study published last week (January 7) in the Proceedings of the National Academy of Sciences. Emerald cockroach wasp larvae are born and raised inside a cockroach carcass, which they eat until they pupate. But before they ingest their cockroach diet, they coat the insect’s insides with a clear liquid secreted from their mouths. Researchers from the University of Regensburg in Germany observed this phenomenon by building clear panels into cockroaches’ sides and watched as the larvae secreted their protective goo. Analyzing the fluid, the researchers found that it contains mellein and micromolide, substances known to slow the growth of certain bacteria.

“Every species that uses potentially contaminated food sources, or that stores nutrient-rich provisions for prolonged periods of time, is expected to have some kind of strategy to prevent food-borne illnesses,” Gudrun Herzner, one of the paper’s authors, told Nature. (See a video of wasp larvae disinfecting a cockroach on Nature’s Website.)