Patients with cystic fibrosis (CF), the most common inherited lethal genetic disorder in Caucasian populations, are prone to severe lung infections by the opportunistic pathogen —a leading cause of morbidity and mortality in these individuals. Chronic CF infections are characterized by the conversion of to a mucoid phenotype (resulting in the overproduction of the exopolysaccharide alginate) and by the formation of differentiated, highly antibiotic-resistant communities of surface-attached bacteria, or biofilms. These biofilms are formed from an extracellular matrix of which exopolysaccharides are one component, but the relationship between the production of alginate and biofilm formation has remained unclear. In the June 9 , Daniel Wozniak and colleagues at Northwestern University report new evidence that may help refine the therapeutic strategies for treating chronic infections in CF patients (, DOI:10.1073/pnas.1231792100, June 9, 2003).

Wozniak et al. examined the biofilm matrix, or EPS (extracellular polymeric substance), produced by nonmucoid wildtype and isogenic alginate biosynthetic mutants of . Nonmucoid strains are the predominant environmental phenotype and are involved in the onset of biofilm formation in the CF lung during initial bacterial colonization, making it important to understand what drives the transition from a nonmucoid to a mucoid phenotype and the role played by alginate in biofilm formation and behavior. They analyzed laboratory-grown biofilms formed by the nonmucoid strains PAO1 and PA14 and their alginate-defective mutants, and they observed that alginate is not required for the initial stages of biofilm development. The architecture and antibiotic resistance profiles of wildtype and alginate-deficient biofilms were identical. In addition, a chemical analysis of PAO1 biofilm EPS failed to detect mannuronic or guluronic acid, the primary sugars of alginate.

These results suggest that transition to mucoidy, with its consequences for CF pathogenesis, may involve a drastic change in the primary carbohydrate constituents of the EPS matrix, from an as-yet-unidentified exopolysaccharide to alginate. "Understanding the dynamic nature of biofilm EPS production and regulation will shed new light on understanding chronic biofilms in CF," conclude the authors. 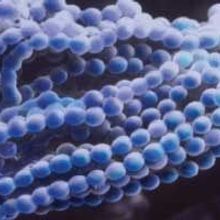