Three papers in this week's reveal genetic changes in humans that may have influenced brain evolution. Two genes involved in brain development have gone through positive selection in modern humans, according to two papers from the laboratory of Bruce Lahn at the University of Chicago. And Ajit Varki of the University of California, San Diego, and colleagues report the discovery of a recombinant protein that's expressed in human brains but not in the brains of other primates.

Recessive loss-of-function mutations in the genes and () cause the disorder primary microcephaly. Brain architecture in those affected appears to be otherwise normal, however, which has led to the idea these genes specifically control brain size. and both seem to regulate neural stem cell proliferation, "but at the molecular level, their functions may be very different, and that's not well understood yet," Lahn told .

Previous phylogenetic analyses of and by Lahn and others have shown that both genes went through strong positive selection in the hominid lineage leading to humans, Lahn said, "suggesting that the evolution of these two genes might have contributed to human brain enlargement."

Lahn and his coworkers sequenced in 89 ethnically diverse humans and found 86 distinct haplotypes. One haplotype had a frequency of 33%, while the remaining 85 haplotypes varied in frequency from 0.6% to 6.2%. The authors ran simulations to determine the probability of a single haplotype achieving this frequency under neutral evolution. They ran separate tests for different possible demographic histories of modern humans.

"None of those produced an outcome as dramatic as that observed," Lahn said. In each case, they found it extremely unlikely statistically that one haplotype would become so prevalent just by chance.

The researchers also found that many people have haplotypes that differ from the high-frequency haplotype by just a few bases. When grouped together, this haplogroup is very homogenous, "implying that they had a common ancestry very recently," Lahn said.

All the evidence, Lahn said, points to an evolutionary history in which what is now the most common haplotype swept from a single copy to high frequency in a short period of time. Since then, minor variants of this haplotype have arisen, creating a geneological clade of haplotypes separate from an ancestral haplogroup.

In a second paper, Lahn's group shows that the same approximate history is likely for : of 90 people tested, they found 106 haplotypes, with one of these being much more common (20% of total) than any others (which varied from 0.56% to 3.3%).

According to these results, "the human brain is actually still evolving," Lahn said, "significantly after the emergence of these so-called anatomically modern humans."

Aside from the association with microcephaly, however, the idea that the selection on these two genes was due to brain size adaptation "is all speculation," said Morris Goodman of Wayne State University, "although, if the ideas aren't thrown forward, people will not be stimulated to try to figure out why this thing was positively selected."

The Varki lab looked at sialic acids and their receptors, as recent work has revealed differences between chimpanzees and humans in these proteins. They found that the sialic-acid receptor Siglec-11 is found as both a gene and a pseudogene in humans, chimpanzees, bonobos, gorillas, and orangutans. However, part of the human gene has more than 99% sequence homology to the pseudogene, but another part shows only about 95% homology. "It didn't make any sense," Varki said. "You'd expect the whole thing to have about the same age."

The researchers determined that part of the human pseudogene must have attached itself to one end of the gene at some point since the split of humans and chimps. This converted part contains a 5' upstream region and an exon that can bind sialic acid. Varki's group also found strong expression of the converted human gene in microglia; the original gene in chimpanzees and orangutans showed only occasional microglial staining.

This paper is "one of only a handful of published papers that document differences in brain organization at a molecular or cellular level between humans and chimpanzees," Todd Preuss of Emory University told .

Studies of this type may help scientists to figure out why some diseases, such as Alzheimer's and AIDS, afflict humans but not other primates, Preuss suggested. "We can use genomic information to guide our search for human-specific phenotypes," Preuss said. "To me, that's the underlying significance of all of these papers." 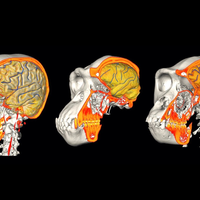