Scientists have noted chromatin's nonrandom distribution in the nucleus for more than a century,1 and many since have sought to explain correlations between a gene's physical location and its activity. Recent studies explore the role the nuclear envelope and its associated structures may play in regulating transcription, and what they find runs counter to some common conceptions.

Heterochromatin is often found in close proximity to the nuclear envelope, with telomeres tethered to the nuclear periphery interacting with the nuclear pore. Placing genes near telomeres or artificially tethering them to the pores results in silence. But actively transcribed genes have been seen to preferentially associate with the components of the nuclear pore complex (NPC) as well. Some researchers even argue that pre-assembled transcriptional machinery resides at these nuclear exits, and that genes are activated through contact with them – a phenomenon dubbed "reverse recruitment."2

"I think the NPC is going to be responsible for integrating a lot of nuclear functions," says Maureen Powers, whose Emory University laboratory studies the relationship between transcription and nuclear pore proteins.

Emerging evidence indicates more direct interaction between chromatin and nuclear pore proteins than previously thought. Pamela Silver's laboratory at Harvard Medical School and the Dana-Farber Cancer Institute studies the spatial and temporal relationships between genes and other nuclear structures. Her group uses a technique called genome-wide location analysis to look at how transcription factors interact with all nuclear DNA. Last year they found that transcriptionally active genes in yeast are preferentially associated with the NPC.3 Using fluorescence microscopy, they found that genes actually relocate to the nuclear periphery upon induction with galactose.

At about the same time, Peter Walter's group at the University of California – San Francisco showed that the gene becomes activated only at the nuclear membrane, through its interaction with the integral membrane protein Scs2 (see micrograph at top of page). By artificially targeting to the nuclear membrane, they were even able to bypass the need for Scs2.4

Such experiments "began to change the view that had been out there, that mainly silent genes interacted with the nuclear periphery," Silver says. Her group wanted to know whether the phenomenon they found was generalizable. They repeated their experiments using mating pheromone, which induces more than 50 genes. "All of these genes," Silver says, "regardless of where they're located in the genome, became associated with the pore when they were induced."3

Silver says she came from a background of thinking about transcription factors as piling onto promoters to initiate transcription. But George Santangelo, of the University of Southern Mississippi in Hattiesburg, says he thinks that the transcription machinery is a very stable structure at the nuclear pore, and that DNA is recruited to it, rather than the other way around. He points to Silver's and Walter's results that active genes can be immunoprecipitated with antibodies directed against nuclear peripheral factors, whereas inactive genes cannot, as support for a "reverse recruitment" model.

Santangelo's lab found through fractionation and biochemical purification that Rap1, Gcr1, Gcr2, and perhaps many more transcription factors remain relatively fixed in the nucleus as components of one or more highly networked gene-expression machines.2 Preliminary evidence based primarily on photobleaching experiments suggests that the transcription machinery, including the polymerase, is stably located at the nuclear periphery, he says.

In leukemia, the fusion proteins have lost their nuclear pore anchor, and so localization at the periphery probably plays no role, notes Nabeel Yaseen, who works on the molecular basis of leukemia at Northwestern University. But one hypothesis that could explain both results, he says, "is that the FG repeats are recruiting coactivators, and other factors that are needed to activate transcription." If this is true, the nucleoporins could act as seeds around which the transcription machinery grows. 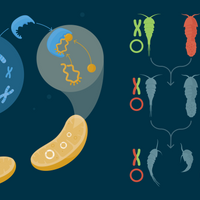