Researchers have discovered that transgenic mice previously shown to outperform their normal counterparts on learning and memory tests1 are also more sensitive to chronic pain.2 This finding suggests that memory formation and pain sensation might share components of a common physiological pathway in mice, and therefore, possibly in other vertebrates such as humans.

These "Doogie" mice (scientifically manipulated mice that make more than the usual amount of the NR2B subunit of the NMDA [N-methyl-D-aspartate] receptor) had better than average performances on mouse intelligence tests. By providing additional and dramatic evidence connecting NMDA receptors and learning in mice, this study generated excitement about the possible implications of these results for human medicine; for example, understanding the relationship between the NR2B subunit and memory formation might lead to the development of more specific, and therefore better, drugs for the treatment of Alzheimer's disease.

Min Zhou, assistant professor of anesthesiology at Washington University School of Medicine, and colleagues report that while Doogie mice might fare better on memory tasks, they do so at a price; they are more sensitive to chronic pain than are normal mice. For example, when subjected to a chronic pain stimulus (injection with a noxious substance) in the hindpaw, Doogie mice continue to lick and bite the affected paw long after normal mice have stopped. Joe Z. Tsien, assistant professor of molecular biology at Princeton offers a different take on these results, focusing on the potential role that learning and memory may play in the behavioral responses demonstrated by the Doogie mice. Tsien likens the experimental paradigm used by Zhou and colleagues to a child getting a flu shot for the second year in a row, saying "...[the child] may start to cry once he realizes that he [has] come back to the doctor's office, before even seeing the syringe and needles... the context of the doctor's office reactivates those unpleasant experiences."

Importantly, however, this behavioral difference appears limited to sensitivity to chronic, rather than acute, pain. The increased ratio of NR2B:NR2A in the forebrain of these mice, therefore, only affects responses to "serious injury [chronic pain]," says Zhou. Thus, "selectively targeting NR2B-containing NMDA receptors could relieve chronic pain without disrupting ... responses to acutely painful stimulus that warn of immediate danger." As for the implications of these findings on human medicine, scientists interested in the possibility of targeting NR2B to treat a variety of human memory disorders, including Alzheimer's disease, must now factor in these new findings.

Kathy Magnusson, associate professor in the department of anatomy and neurobiology at Colorado State University, commenta that before the Nature Neuroscience report, she would have said that the goal for treating memory loss due to aging would have been to return the ratio of NR2B:NR2A to its developmental level. Now, she cautions, scientists need to be careful about a global fix for memory loss in humans. Likewise, the benefits of NR2B-mediated chronic pain management must be weighed against potential memory deficits. But Zhou and others remain optimistic, pointing out that additional information on common physiological mechanisms will only help scientists understand and treat human diseases more accurately and specifically. 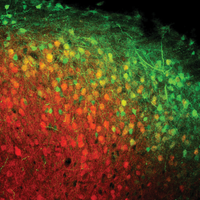