Integrins serve as the cell's conduit to the outside world, sensing the external environment and passing on instructions: differentiate or not, adhere or move on, live or die. Their roles in controlling cell behavior, coupled with their cell-surface location, have made them highly attractive drug targets. But while researchers have made significant progress tracing integrin-related cell-signaling pathways, critical gaps remain.

Integrin functions are important in nearly every tissue, and knowledge is far from complete. For example, "which [integrins] are involved in which cancers still needs a lot more work," says Richard Hynes of the Center for Cancer Research at Massachusetts Institute of Technology. Martin Schwartz of the University of Virginia, warns, "You can't monkey with these things without subverting the normal response."

Integrins are the major adhesion receptors in cells, linking the extracellular matrix with internal cytoskeletal elements and signaling pathways. "Integrins are critical to how cells are instructed to move and differentiate at the right time and place," says Deepak Srivastava, University of California, San Francisco, who studies cardiovascular development. Thus they are key players in such processes as organogenesis and vascularization.

Each integrin contains an α and a β subunit. The genome contains on the order of 20 αs and 10 βs, leading to a large potential number of combinations. But not all are made. Some α and β subunits are "monogamous," preferring a single partner, says Hynes, while others are relatively promiscuous and form part of several different integrins.

The difficulty in linking integrins to specific processes is partially due to the sheer complexity of their expression. Cells usually express more than one integrin, in complex patterns that can change with time and environment and overlap between cell types, explains Hynes. Moreover, their key developmental role means that genetic knockouts are often embryonic lethal, precluding detailed studies of mutant animals.

In cancer, integrins are involved in loss of anchorage-dependent growth, tumor angiogenesis, and tumor-cell migration during tissue invasion and metastasis. "The rough rule is that stable adhesion is turned down and migratory adhesion is turned up in cancer cells," says Schwartz.

Cancer researchers have focused on the potential antiangiogenic properties of integrin inhibitors. Work by David Cheresh of The Scripps Research Institute in La Jolla, Calif., and others has shown that integrin αvβ3 inhibitors suppress tumor growth and disrupt angiogenesis in mice. Vitaxin, an antibody against αvβ3, is the "first anticancer integrin antagonist that shows efficacy," notes Cheresh, referring to recent successful trials in late-stage melanoma patients.

But αvβ3 presents a major discrepancy. Genetic knockout of β3, which would prevent αvβ3 formation, promotes tumor growth and angiogenesis in mice. Hynes favors another integrin, α5β1, as far more important in both tumors and normal development. Inhibitor and knockout results with α5β1 are in agreement, he says, showing that it is "clearly essential everywhere for blood vessel growth."

Hynes suggests that Vitaxin may instead inhibit αvβ3 expressed by the tumor cells themselves. Melanoma cells overexpress αvβ3 on occasion, and overexpression correlates with tumor invasiveness. "It's still unclear which integrins are most important for angiogenesis," he says. Underscoring his point, Judith Varner at the University of California, San Diego, recently revealed a previously unsuspected role in angiogenesis for yet another integrin, α4β1.1

Such difficulties are not limited to angiogenesis. Jordan Kreidberg of Harvard Medical School is studying integrins in kidney organogenesis. He says that knockout of the four major integrins expressed in the kidney has led to "no great insight yet." Effects range from none, to some tubule disorganization, to the complete absence of kidneys. Researchers have yet to correlate these defects with specific integrins in specific cell types.

Kreidberg points out that "it's difficult to make links between the huge amount of in vitro data [on integrins] and their roles in development." In particular, there are problems going from two-dimensional tissue cultures to whole organs and embryos. "It's very difficult to measure signaling in a developing embryo. There's no huge burst of something happening like in tissue culture," he says.

Moreover, he suggests that tissue-culture studies may actually obscure understanding of integrin function. Cheresh and others agree that there are differences. Dynamic cell-cell interactions are absent in culture, says Cheresh, and the extracellular matrix is much less complex. "We cannot make conclusions from pure in vitro response," he notes. Of course, whole-organ and animal studies can't approach many questions yet. "We need both ways of looking at it," Hynes points out.

Complicating matters further, integrins exist in multiple activity states. "There is an activated form that binds ligands with high affinity, and a resting state that binds with low affinity," says Mark Ginsberg, who works on integrin structure at UC, San Diego. According to Hynes, "You must know if the integrin is activated" to interpret its role in a given cell. New reagents, such as monoclonal antibodies, could distinguish active from resting integrins, he says. He also envisions mice expressing tagged integrins that fluoresce only when activated, allowing in vivo measurement of activation states.

Despite these difficulties, integrin inhibitors are currently in clinical trials for cancer, including Vitaxin, and Celengitide for glioblastoma. Two others, Integrilin and ReoPro, have been approved as blood thinners in cardiovascular disease.

Cheresh says he's optimistic. "I think we will ultimately see several integrin antagonists... used as drugs for various indications." Tysabri is still having difficulties, even after favorable safety reviews announced last month. Cheresh and others speculate that Tysabri had a synergistic effect with immunosuppressive drugs that the patients were taking leading to the opportunistic infection that caused PML. "This agent does have a positive impact on MS," Cheresh says, and such a drug is sorely needed. 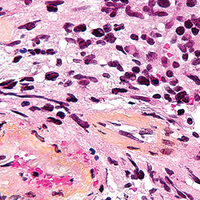 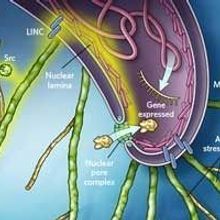 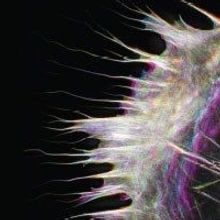