For 21st Century This year marks the 200th anniversary of the first vaccine, which was developed against smallpox. As vaccine researchers launch a new century of challenging disease science, they might find inspiration in the simple beginnings of Edward Jenner's discovery.

According to lore, Jenner was a country doctor-albeit a well-educated one-who heard a rumor that the cowpox virus could provide immunity to smallpox. Investigating the theory, Jenner endured the disbelief of colleagues-not to mention the stench of dairy farms-before proving his point.

But prove it he did. In a now-famous 1796 experiment, Jenner scratched the arm of eight-year-old James Phipps, infecting the boy with cowpox pus taken from a milkmaid carrying the virus. Two months later, he scratched James again, this time adding a touch of smallpox. The rest, as they say, is history: James was fine. A smallpox vaccine-and the field of vaccinology-was launched. Today, smallpox has been eradicated. In a similar vein, the pioneering work of researchers like Albert Sabin and Jonas Salk roughly 150 years later led to vaccines against polio, now wiped from the Western Hemisphere.

Since 1980, 14 new or improved vaccines have been released, including the world's first genetically engineered varieties. Toting an arsenal of biotech tools and painstakingly gathered information, today's vaccine seekers are better equipped than Jenner. The pathogenicity of many microbes is understood. Tissue-culture techniques provide a way to grow cells in the lab. Recombinant DNA technology and monoclonal antibodies produce faster and safer vaccines.

In fact, the very approach to vaccines has changed, notes Donald Henderson, a professor of international health and epidemiology at Johns Hopkins University. "Not too long ago, we were doing things empirically," Henderson says. "With polio, measles, and rubella, we would try [vaccines] out on people and see if the reactions were reasonable. Now, we look at subunit vaccines [containing only certain components of a disease-causing organism] and we carefully test those in the lab before doing any clinical trials. This is where a basic understanding of elegant microbial genetics and the immune system have made a major difference."

Still, Henderson is quick to point out a host of defiant diseases that challenge 20th-century researchers: AIDS, malaria, influenza, and cancer, among others. "We can engineer vaccines like never before," he comments, "but there are still so many questions."

Henderson will explore those questions in his guest lecture, "The Miracle of Vaccination," at a May symposium celebrating the bicentennial of Jenner's smallpox vaccine. Jointly held at the Royal College of Physicians and the Wellcome Institute for the History of Medicine in London, the conference is titled "The Legacy of Jenner: Vaccination Past, Present, and Future."

Conference presenters will spotlight moments in vaccine history and share information on new vaccines. By the end, Henderson says, he hopes participants know where vaccines have been-and where they're going.

When Margaret Liu, an immunologist at Merck Research Laboratories in West Point, Pa., gives a presentation, she often includes a slide of Edward Jenner's "little hut," where he first administered the smallpox vaccine.

"It's an important link to modern vaccines," says Liu, who will speak at the London conference. "Jenner was administering a [cowpox] virus, with all its DNA. The virus would replicate and provide proteins that triggered the immune system."

Liu is developing a new twist on Jenner's technique: DNA vaccines. Rather than injecting a whole or partial virus into patients, a DNA vaccine injects mere snippets of key viral DNA. Taking up that DNA, a patient's cells should make the encoded viral protein. Spotting the foreign protein, the patient's class I major histocompatibility (MHC) proteins will alert killer T cells and launch an immune attack. From that point on, the patient would be immunized against the virus at hand.

Many vaccines begin as a fluke. For example, Louis Pasteur discovered the notion of attenuated vaccines when old cholera cultures-forgotten on a lab bench-lost their virulence. Inoculated with the aged cultures, chickens unexpectedly developed immunity to a fowl form of cholera.

Similarly, DNA vaccines emerged as a surprise. In a 1990 experiment, researchers at publicly owned Vical Inc., then a biotech startup in San Diego, and the University of Wisconsin injected a control group of mice with "naked" viral DNA. Unexpectedly, the control mice began churning out significant amounts of viral proteins.

Since then, Merck has acquired rights to Vical's work on DNA vaccines for HIV, tuberculosis, hepatitis B and C, herpes, and human papilloma viruses. With other collaborators, Vical is also developing DNA vaccines for malaria, Lyme disease, cytomegalovirus, and other conditions.

In February, the Food and Drug Administration (FDA) granted approval to begin the first DNA vaccine clinical trials on healthy volunteers. The Phase I trials will test the safety of a potential AIDS vaccine carrying genes that code for noninfectious HIV proteins. Investigators from the University of Pennsylvania and the private biotech firm Apollon Inc. in Malvern, Pa., will conduct the trials.

Other researchers also are developing DNA vaccines. "So far, this approach seems safe and effective," comments Stephen Johnston, a professor of internal medicine and biochemistry at the University of Texas Southwestern Medical Center in Dallas. Johnston and colleagues created a DNA-based vaccine against a lung pathogen found in rodents (M.A. Barry et al., Nature, 377:632-5, 1995). "As our genome-sequencing technology improves, we should be able to systematically sequence a pathogen, break up the genome, and shoot in the relevant DNA," Johnston says.

DNA vaccines may offer several advantages over other vaccines (W.M. McDonnell, F.K. Askari, New England Journal of Medicine, 334:42-5, 1996). One is immunogenicity. Many vaccines consist of viral surface proteins that provoke an antibody response. Such antibody-mediated immune responses can be weak. By contrast, DNA vaccines work from the inside of cells, attracting MHC proteins and a potentially stronger cell-mediated response.

DNA vaccines may also outsmart forever-mutating viruses like influenza A. By changing its surface proteins, the influenza A virus foils immune system memory, rendering the latest vaccine ineffective. However, the Merck/Vical DNA vaccine relies on a core influenza A nucleoprotein that rarely changes. The vaccine should survive influenza's surface mutations.

"The next key issue for the field is to demonstrate clinical utility," notes Liu. If researchers can do that, she says, DNA vaccines are here to stay.

While DNA vaccines for infectious disease have galloped into trials, vaccines against cancer have crawled. Why? It's the nature of the beast, according to Alan Houghton, head of the immunology program at Memorial Sloan-Kettering Cancer Center in New York.

"The big distinction is that infectious agents are foreign, so the immune system can usually see them that way," Houghton explains. "But cancer grows from tissues in the body, so a vaccine is essentially trying to trigger an immune response against yourself. It is a much harder problem."

After a decade of intense research, more than a dozen cancer centers and nine biotechnology companies are conducting various types of cancer vaccine clinical trials, according to the National Cancer Institute (NCI).

Cancer vaccines aim to boost immune response to existing tumors (R. Lewis, The Scientist, April 3, 1995, page 15). One popular approach has been to isolate a tumor antigen and fuse it to an adjuvant, a chemical agent that kick-starts the immune system. Theoretically, this duo should guide immune system molecules to tumor cells, which will then be destroyed.

Sloan-Kettering scientists have administered a melanoma antigen/adjuvant vaccine to patients in clinical trials. While initial results were disappointing (P.O. Livingston, Journal of Clinical Oncology, 12:1036-44, 1994), Houghton says researchers have improved the vaccine and will test it again in trials this spring.

Using another technique, researchers at Fordham University are exploring the ability of common heat shock proteins (HSPs) to collect tumor antigen fragments and display them to the immune system. In mice, doses of HSPs generated an immune response (R. Suto, P.K. Srivastava, Science, 269:1585-8, 1995).

"It has been a long road with cancer vaccines," comments Olivera Finn, director of the immunology program at the University of Pittsburgh's Cancer Institute. "Our first break came when it was possible to grow human T cells in culture. Then, we began learning about antigen presentation pathways. Now the question is whether we can take tumor antigens and make them immunogenic."

Cancer vaccine researchers are cautiously optimistic, Finn states. "We've learned that just because we can do it in the lab doesn't mean we can do it in a person. It is difficult that we still see our patients die of cancer."

If one disorder has come to dominate news at the end of the 20th century, it is AIDS. According to the National Institute of Allergy and Infectious Diseases (NIAID), more than 400,000 people in the United States have developed AIDS-defining diseases. Up to 1 million Americans are believed to be infected with HIV (NIAID, Annual Report: Accelerated Development of Vaccines, 1995).

Since 1987, NIAID has supported clinical trials of more than 25 experimental HIV vaccines across the world. At least 24 companies are developing an HIV vaccine. The vaccine candidates range from conventional whole-inactivated viruses to genetically engineered subunit vaccines, which administer a noninfective yet immunogenic portion of the virus.

Some HIV vaccines consist of recombinant versions of glycoprotein gp120, an HIV surface protein (E. Race et al., Vaccine, 13[1]:54-60, 1995). While some of these vaccines showed early promise in lab assays, they failed to stimulate neutralizing antibodies to actual HIV taken from infected individuals, NIAID reports. The search for an effective AIDS vaccine continues.

HIV has completely beguiled researchers, observes Arthur Silverstein, a professor, emeritus, of immunology at Johns Hopkins and now at the university's Institute of the History of Medicine.

"[HIV] is amazing, the way it changes itself continually," Silverstein remarks. "It boils down to the same thing Jenner, Pasteur, and others struggled with: the battle between the organism and the host. It's a constant struggle between pathogenicity and immunity."

Liu agrees: "Everyone is very impressed with how the [HIV] virus has managed to outwit many of the host's defenses," she says. The virus, she predicts, will remain one of the great challenges facing vaccinologists.

No matter what the disease, genetic engineering, gene discovery, and other technological feats should speed vaccine development, researchers believe. "Today, we apply genetic engineering to produce vaccines that weren't even conceivable just a few years ago," says James Kaper, an immunologist at the University of Maryland in Baltimore.

For example, Kaper and colleagues crafted the first genetically engineered cholera vaccine, now licensed in Switzerland and soon to be submitted to FDA for United States distribution. The vaccine is a recombinant version of an attenuated Vibrio cholerae pathogen engineered to omit its toxic subunit (M.M. Levine et al., Lancet, 2[8609]:467-70, 1988).

Still, equaling the success of smallpox eradication will require more than scientific prowess, notes Philip Russell, a professor of international health at Johns Hopkins and president of the Albert B. Sabin Vaccine Foundation, a New Canaan, Conn.-based nonprofit organization that promotes vaccine research and policy. The development of a successful new vaccine relies on social and economic networks to distribute it.

The Sabin Foundation brought these sectors together to discuss vaccine policy in two forums held at Cold Spring Harbor; one in December 1994 and the other in November 1995. A third forum is being planned. The ultimate goal, Russell says, is to develop an improved international vaccine development and distribution system.

Meanwhile, scientists plug away at the vaccine research bench. Drawing on history, they search for the next discovery. Liu likes to note that Jenner himself built from the Chinese, who initiated primitive inoculations with aging smallpox scabs. "In a sense," she says, "we are all standing on each other's shoulders."

Kathryn S. Brown is a freelance science writer based in Columbia, Mo. 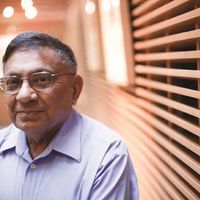