A meeting this past May ushered in the birth, or perhaps rebirth, of a field of study in which the controversy starts at the very name. František Baluška, of the University of Bonn, Germany, coorganized the First Symposium on Plant Neurobiology, calling the field a "new view of plants" that combines physiology, ecology, and molecular biology.1

Neuroscientists won't likely worry about plant scientists encroaching on their territory, but the name does make some uneasy. "It's more a problem with the green party than the red party," quips Dieter Volkman, also at University of Bonn. Not the least because some scientists have pushed the boundaries in attributing intelligence to the vegetative. Tony Trewavas, professor in plant biology at the University of Edinburgh, argues, "The basics of intelligence are not to be found in reasoning, shrewdness, and other similar terms, but it is instead the capacity for problem solving, something that virtually all organisms have to do."

But Baluška and the meeting's other organizers presented many tantalizing comparisons between plants and animals, suggesting that they may share neurological-like qualities. Plants use electrical signaling such as action potentials for cell-to-cell communication; they also use signaling molecules and processes similar to those in nervous systems. Plants can obtain, process, store, and transmit information, and they can live in complex communities.

Though the name may be controversial, most scientists involved thought that the meeting was a good and timely idea. For many researchers, it was a time to dust off old observations and to set up new collaborations. For example, scientists researching glutamate receptors in plants for many years "came together for the first time," according to Volkman. Susan Murch, program officer of science based medicinal plants at the University of Guelph says the meeting was "less a meeting presenting current results, more about results that span 20 years." For some it's an idea whose time has come.

Though the observation that plants have electrical signaling is more than a century old (see sidebar), scientists are still uncertain as to what electricity is doing to plants. Alain Vian of Blaise Pascal University in Claremont, France, presented unpublished work showing one of the first direct biological consequences of electrical fields like those found in the modern environment. Unlike animals, plants have two types of electrical signaling. Action potentials, involving membrane depolarization, act at high speeds (1 cm/sec) and have a refractory period. Variation potential (called slow wave in Europe) is a systematic electrical signal that occurs more slowly (1 mm/sec) in plants.

Plant neurobiology marks the third broad historical opportunity for scientists to ponder seriously the role of electrical signaling in plants. Action potentials in plants date back to 1873, when J. Burdon Sanderson published his observations on the "electrical phenomena" in Venus fly traps. Later, in 1896, Charles Darwin wrote about experiments demonstrating the "transmission of the motor impulse" in the same plant species. Ultimately, research into electrical signaling flourished in animals and withered in plants.

One hundred years after Sanderson's publication, under the guise of electrophysiology, Barbara Pickard of Washington University in St. Louis wrote an academic review that might have ushered in a new era.1 In the paper, she writes, "The emerging notion that all higher plants might utilize electrical signals in coordinating a variety of daily functions seems ripe for closer examination." But that same year, Peter Tompkins and Christopher Bird published The Secret Life of Plants, which concluded that electrical activity in plants points to the hidden emotional lives of photosynthesizers.2 The effect was devastating to the nascent field.

Thirty years later, the field has been expanded, renamed, and repackaged as part of plant neurobiology. Some scientists fear that plant neurobiology's name may backfire, sending plant electrophysiology back into the woodwork. Eric Davies of North Carolina State University writes via E-mail: "Those in favor (believers) say that "neuro" is a plant word for fiber stolen by the animal people. Those opposed (atheists) worry about the 'Secret Life' syndrome. Some of those uncertain (agnostics) delight in the provocative title, but worry about being cast aside by the mainstream yet again."

The title won't do much harm, says Peter Barlow of the University of Bristol, UK, who writes: "I doubt that there will be the 'backlash.' People in science are much more open-minded nowadays, partly because science has become so diverse and so many unexpected discoveries have come about." Tony Trewavas at the University of Edinburgh takes a more pragmatic position: "Most plant biologists are open to new concepts. If they find the concepts useful, they will survive, if they don't, it will simply disappear."

Using an electromagnetic source similar to cell phones, Vian found that the "weak stimulation is able to evoke gene expression of stress-related genes." By exposing one leaf and shielding the rest of the plant, "there is a transmission of stimulus from the stimulated leaf to the shielded leaf." Independent research from Hillel Fromm at Tel Aviv University, Israel, suggests that the "phloem serves as a communication of electrical signals over long distances." Vian notes that unlike controversial studies associating brain cancer with cell phone use, this is an example of a tractable biological response from electromagnetic doses found in our present surroundings.

It's been known for some time that plants contain neurotransmitter machinery similar to animals, such as glutamate receptor-like genes (GluRs). In animals, glutamate is the major excitatory neurotransmitter in their central nervous systems. So far little is known about the function of GluRs in Arabidopsis, where they were originally identified, but external application of glutamate can depolarize roots and cause ionic influxes, analogous to neurons.2 Nevertheless Fromm notes, "What was missing [at the meeting] was the connection between electrophysiology and neurotransmitters."

In animals, synapses connect nerve cells and are where the vesicle-mediated transport of neurotransmitters occurs. Originally thought to be unique to neurons, immunological researchers now describe signaling between T lymphocytes and antigen-presenting cells (APCs) as occurring through synapses.3 Translated to plants, some scientists propose that auxin, a plant-specific hormone, may shuttle through vesicles between plant cells. Researchers have shown that PIN1, crucial to auxin transport, cycles between the basal plasma membrane and the intracellular spaces. However, Ottoline Leyser, a geneticist at the University of York who studies auxin, says, "The comparison with synapses I think is pretty weak. Most people agree that the [PIN1] cycling happens. There is no evidence at all that vesicles transport auxin or for vesicles grabbing the auxin at the other side." Leyser suggests that uptake of auxin occurs through either diffusion or the AUX family of proteins. However, she notes "The direction [of auxin transport through tissues] is mostly driven by efflux."

Plant neurobiology may raise awareness that, though plants cannot move, they actively monitor and react to their biotic and abiotic environments, analogous to social animals. Velemir Ninkovic (Swedish University of Agricultural Sciences, Uppsala, Sweden) presented evidence that plants use volatiles to communicate with each other to "identify competitors and then change growth strategy." Even if a plant has a lower biomass due to a competitor, "leaf area increases in the plant which can support higher physiology," which compensates for the smaller size. Research to identify the chemical composition of these volatiles is ongoing.

Many questions still need to be addressed about how plants process information from the environment to optimize growth. While scientists alter one condition at a time, "cells in the real world respond to all things at once," notes Baskin. "How does a plant respond to its environment in a coherent way without a central processor?" asks Mott.

But as the multidisciplinary field comes to fruition, some remain uncertain that the name will stick. Keith Mott of Utah State University says, "In my opinion it [the title] was a mistake because of the animal connotations. In the end I don't think it [the field] will get called plant neurobiology."

Indeed, starting in January 2006, Landes Bioscience will begin publishing Plant Signaling and Behavior, a peer-reviewed quarterly journal.4 The title suggested by the publisher, Plant Neurobiology, was eventually rejected because of an E-mail discussion among 20 to 25 symposium participants. While some have trepidations about the title, others just find it insulting. Peter Neumann, chair of agricultural engineering at Technion-Israel Institute of Technology, says, "Plants are unique. There is no reason to take creatures that are autotropic and call them demi-animals." Leyser agrees, adding, "Multicellularity evolved completely independently in plants and animals. There is no reason to think that they would solve the problems in the same way." 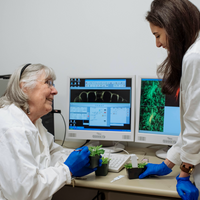