RNA interference (RNAi) is fast becoming an essential tool for academic and industrial labs searching for genes that promote or inhibit cancer. Munich-based Xantos Biomedicine, for example, once relied on cDNA overexpression, a decades-old approach, to identify novel genes with tumor-suppressor phenotypes. But the small five-year-old company is now supplementing its gain-of-function, high-throughput cDNA technology with loss-of-function RNAi. "I don't see any really stringent advantage of...

In a 2003 study, Marcel Tijsterman and Ronald H.A. Plasterk, scientists at the Center for Biomedical Genetics in Utrecht, the Netherlands, and their colleagues used RNAi to discover which genes could be knocked down to create a mutator phenotype. Knockdowns of 16,606 genes yielded 61 whose protein products would be expected to protect the genome against mutations.1 Though is not vulnerable to cancer during its two-week lifespan, orthologs of these genes might encode tumor suppressors in higher organisms.

In a later project, Tijsterman, Plasterk, and colleagues performed synthetic-lethal experiments, wherein two manipulations, neither of which is deadly on its own, are paired to see if the combination is fatal.2 First, the group applied RNAi to a mutant nematode strain that displays increased double-strand DNA breaks; these breaks create the genomic instability characteristic of cancer cells. The goal was to uncover genes essential to repairing such breaks such that their knockdown would kill the worms. A screen of 16,757 genes yielded 32 candidates. To determine whether these genes act downstream of the DNA breaks, the researchers next exposed wild-type either to irradiation or to the drug camptothecin, both of which create double-strand breaks. Then they treated the worms with RNAi against the 32 genes. Knockdowns of 11 presumably downstream genes proved lethal.

Tijsterman reports that, besides further assaying some of these genes, his lab is testing whether they are mutated in human tumor tissues. He also hypothesizes that in some syndromes, patients have one mutant and one wild-type allele. "So it is the prediction that if you look at blood samples from these patients that they are heterozygous," he says, adding that loss of that heterozygosity could trigger cancer.

The Dutch group's work on double-strand breaks was echoed last year by another study combining RNAi with mutations. Scientists in the 24-member team first conducted a yeast-two-hybrid screen to map protein interactions in the TGF-β network. In worms, this network regulates the entry of environmentally stressed larvae into a hibernation-like state known as dauer. Half of the network's almost 60 proteins showed strong sequence conservation in humans, in whom TGF-β can play a tumorigenic role. The researchers next applied RNAi to nematodes that bore mutations in the network's components. This double-perturbation analysis (which does not necessarily involve lethality) revealed epistatic relationships – that is, which proteins are upstream and downstream in a pathway.3

Such analyses are particularly informative "because the genetic networks of double, even triple or quadruple mutations in cancer cells can be very complex," explains Marc Vidal, director of the Dana-Farber Cancer Institute's Center for Cancer Systems Biology in Boston and the paper's last author. His lab is now using RNAi to generate phenotypic profiles. The idea is to knock down many genes, observe the resulting phenotypes, and cluster the genes by how similar those phenotypes are. "What we're pushing very strongly right now is to take such similarity measurements between pairs of genes and overlay that on top of the interactome [protein-interaction] map," Vidal says.

One limitation of as a model system is that scientists cannot culture nematode cells. , in contrast, is amenable to cell culture. Flies even develop tumors, notes Philip A. Beachy, a molecular biology and genetics professor at Johns Hopkins University School of Medicine, though he says he's uncertain as to how similar these neoplasms are to human cancers.

Beachy focuses on the Hedgehog (Hh) pathway, which normally regulates cell differentiation and proliferation but can contribute to endodermally derived human tumors. In a 2003 study, he and colleagues monitored an Hh-responsive luciferase reporter after they exposed cell cultures to RNAi constructs targeting roughly 5,700 genes. The screen uncovered four genes not previously linked to the pathway.4 Beachy's lab is now exploring whether a protein encoded by one of the genes, casein kinase-1a, is a tumor suppressor in higher animals.

Though major components of the mammalian Hh pathway remain unknown, Beachy cites a problem with using RNAi to identify them. "You can't feed mammalian cells big double-stranded RNA because you induce the interferon response and the cells basically shut down," he observes. "What you have to do is to introduce short RNAs. But that's tricky because you have to figure out which of the many possible short segments of RNA in a particular sequence will work."

Two recent papers illustrate how RNAi can screen for human cancer-related genes. A team headed by Bernards, of the Netherlands Cancer Institute, applied three RNAi molecules for each of the 7,914 genes targeted for suppression; off-target effects were avoided by minimizing homologies among the molecules. The researchers screened modified human fibroblasts for genes encoding components of the p53 tumor suppressor pathway.5

Because inhibiting these genes would give cells a growth advantage, Bernards acknowledges that the study probably did not discover useful targets for cancer drugs. Instead, he regards its findings more as a proof of principle, illustrating how RNAi can yield fresh insights into a pathway that has been intensively examined for 20 years. "In one genetic screen, we put five more genes into that pathway, which is not trivial," he notes. "And right now, this list has grown to well over 20."

Aza-Blanc and colleagues at GNF applied RNAi against 510 human genes to understand another form of protection against cancer: TRAIL, a member of the tumor necrosis factor family, induces apoptosis in various malignant cells but not in normal cells. The GNF project identified genes that make tumor-derived HeLa cells more or less sensitive to TRAIL-induced apoptosis.6 One gene found to be pro-apoptotic, for example, was It encodes part of the signal-recognition particle that helps sort out secreted proteins.

Quinn L. Deveraux, an apoptosis specialist at GNF who participated in the study, says that the researchers mapped the genes to portions of the TRAIL pathway "by looking at caspase activation and other cell-death events." In extensive follow-up experiments, Deveraux, Aza-Blanc, and others have demonstrated that knockdown of inhibits apoptosis by preventing the cell-surface localization of the DR4 receptor to which TRAIL binds. "That's the dynamics of these kinds of studies," notes Aza-Blanc. "You do a screen, but that's pretty much 10% of the work that you do. If you want to get real results out of it, then you have to validate the results." 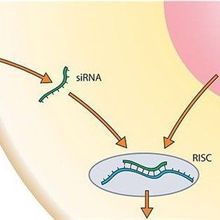 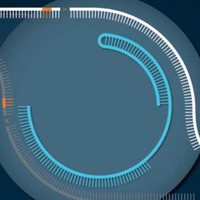 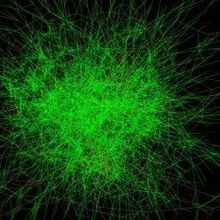