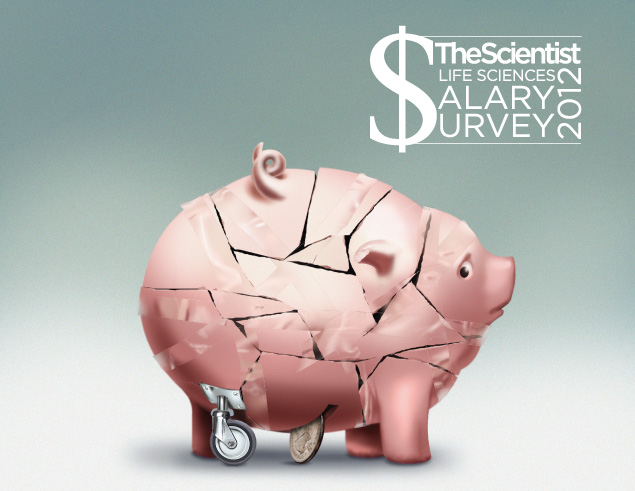 Salaries hinted at a recovery last year after a noticeable dip in 2010—the first-ever drop in The Scientist’s 10-year history of surveying the life science community. But this year, salaries remained relatively flat overall compared with 2011, and even regressed in some areas. In contrast to the steady growth observed in The Scientist’s Salary Survey since 2001, the past few years stand out as a distinct plateau, with 2012 median total earnings (salaries plus fees, bonuses, and profit sharing) of $87,000 falling just below the $90,000 our readers reported in 2009. However, the overall flatness in the 2012 median earnings disguises big changes across sectors and regions of the country.

This year’s high-scoring disciplines included bioengineering, biophysics, and food/nutrition science. Earnings in traditional research specialties, on the other hand, took a significant hit: median total compensation for researchers in endocrinology dropped by more than $30,000...

As life  science industries try to figure out the best ways to weather the continued economic storm and to grow despite increased competition for investment, the higher salaries associated with industry will continue to come with a greater risk of layoffs. Indeed, companies have reduced their number of full-time employees in favor of temporary workers. Although this may mean fewer permanent jobs, the compensation for consultants this year increased by more than $50,000 over 2011, as companies compete for the best freelancers.

While overall salaries were down this year, a number of fields saw noticeable increases in compensation, including bioengineering (up more than $30,000 compared to last year), biophysics (up by $29,000), and food/nutrition science (up by nearly $20,000). But as usual, the biggest salary differences aren’t seen across fields, but across sectors: there is a marked difference between specialists working in academic, government, or nonprofit (nonacademic) institutions, on the one hand, and those in industry on the other. The pattern of higher salaries in industry is part of a historical trend, says Mark Lanfear, a strategic advisor at Kelly Scientific Resources, where the risk and instability of industry work are balanced by the possibility of higher salaries and bonuses.

The gap between industrial and nonindustrial salaries for cancer/oncology is far greater than in any other specialty, with industry professionals receiving some $100,000 more per year. Lanfear notes that industry seems to involve itself more in cancer research, because of a strong need and high marketability for new treatments. Thus, while academics still tend to do the bulk of the basic research, industry is quicker to step in when it comes to drug development for cancer. “Cancer is different, because as soon as we start having some indication that a therapy could work, we often move to fast-track, allowing patients to be treated directly,” Lanfear says. “What you end up having is probably a discrepancy in the amount of research that’s done, with much less academic-type experiments.”

The 2012 salary survey shows a great range of trends in job activities. Laboratory research is reasonably stable, but research in the clinical sector, which was hit hard in 2010, took another significant dip this year. Clinical services also experienced a dramatic downturn in the same two years, as did earnings in patient care. With an aging population, this is perhaps surprising, as need for health-care professionals should be rising. Lanfear thinks the lack of growth in this sector is indicative of the wider economic climate. “It’s a bellwether for the challenges that the current economy of the United States is facing.”

Lanfear says he was surprised to see salaries in technology transfer remain relatively flat, as commercializing products has long been a major focus in industry and there is an increasing push for academics to do the same, with many academic institutions opening up technology transfer offices to market intellectual property generated by their research. In contrast, remuneration for consulting services has experienced a massive rise, which Lanfear attributes to a larger consultancy workforce in response to fewer opportunities for steady employment, and corporations resorting to highly paid consultants. “It’s a sort of bittersweet situation,” he says. “It’s good for the consultant in hand that’s doing that, but my overall question would be: How is this truly affecting the overall market and unemployment now?”

In contrast to the discrepancies between the different sectors of  life science research, there is a remarkable consistency between specialties in the relative earnings at each level within academia. Across the board, salaries go up as researchers move up the ladder from assistant professor to associate professor to full professor, at which point compensation of all specialties tops $100,000 per year. “Anything over the $100,000 range . . . is in the top percentage of earners in the country,” Lanfear says. Academic degrees are increasingly expensive, but for those—admittedly few—who make it to full professor, that investment may pay off. 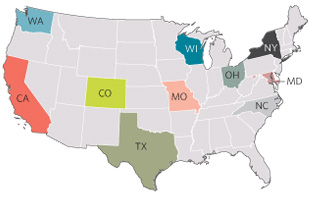 The majority of states experienced at least some downturn in salaries this year, but many states that traditionally have a greater reliance on science and technology sectors, such as New York, Maryland, and California, managed to grow.

While New Yorkers suffered with everyone else in 2010, the state has experienced some of the best growth in recent years, with median total compensation rising from $90,000 last year to a whopping $101,500 this year. Lanfear says this is likely due to decisions made by pharmaceutical and health sciences companies that dominate the region. “A lot of the large pharmaceutical companies have scaled back,” Lanfear says, but in so doing, they have “retained the talent that they needed, and allowed their talent to have the salary growth that was necessary to keep them in place.” While California also relies heavily on scientific industry, and did experience an uptick in earnings this year, it has not recovered as well as New York, showing less than a $2,200 gain over 2011. “There may be a possibility that the employment rules or the culture of the West Coast did not assist them in holding on to the same things,” Lanfear says. California’s volatile housing market likely also played a role, he adds.

The gender gap is still apparent in the 2012 survey, with females earning less than males at all levels of supervisory responsibility, from staff to professional management; the percentage difference in earnings is remarkably consistent across positions. “It should drive us to do further research to understand if there are any gaps in experience level, education, years in the industry, or if there’s some other ambient factor that we aren’t acknowledging that could be affecting these salaries,” Lanfear says.

See more of the data broken down graphically in this slide show.