Growing up in Hermosillo, Mexico, Adriana L. Romero-Olivares spent many weekends among the stately saguaros of the Sonoran Desert. Her father, drawing on his knowledge of local plants and animals, taught her the basics of biology, a path she followed after a high school teacher suggested she study science. Toward the end of her undergraduate career at the Autonomous University of Baja California, she says, she fell in love with molecular biology. “I had no idea what this invisible world looked like, but once I did, it blew my mind.”

Romero-Olivares stayed at the University of Baja for her master’s degree, using genetic tools to characterize assemblages of fungi across the Baja Peninsula’s many microclimates. Her unpublished results confirmed that fungi display the same biogeographical tendencies as plants and animals—namely, organisms evolve to thrive in their environments. Fungal communities from similar ecosystems were more alike, regardless of the geographical distance that separated them.

With climate change warping ecosystems worldwide, Romero-Olivares wondered how fungi might adapt, a pressing question given their importance in global nutrient cycling. Fungi grow by breaking down detritus, unlocking nitrogen for other species and releasing carbon into the atmosphere. To study whether warming prompts physiological changes in fungi, Romero-Olivares joined fungal biogeochemist Kathleen Treseder at the University of California, Irvine, in 2012 for her PhD work.

Romero-Olivares started her doctoral research by growing strains of the mold Neurospora discreta at 16 °C or 28 °C for 1,500 generations. She then exposed these “adapted” molds and their parent strains in the lab to warming while monitoring their growth rate, biomass, spore production, and CO2 respiration. As temperatures climbed, adapted strains produced more spores—perhaps to ensure their survival under higher temperatures—and devoted less energy to growth, therefore decomposing less organic material and respiring less carbon. These early experiments with Neurospora were “the driver of many ideas that I still have” about how fungi adapt to changing conditions, Romero-Olivares says. 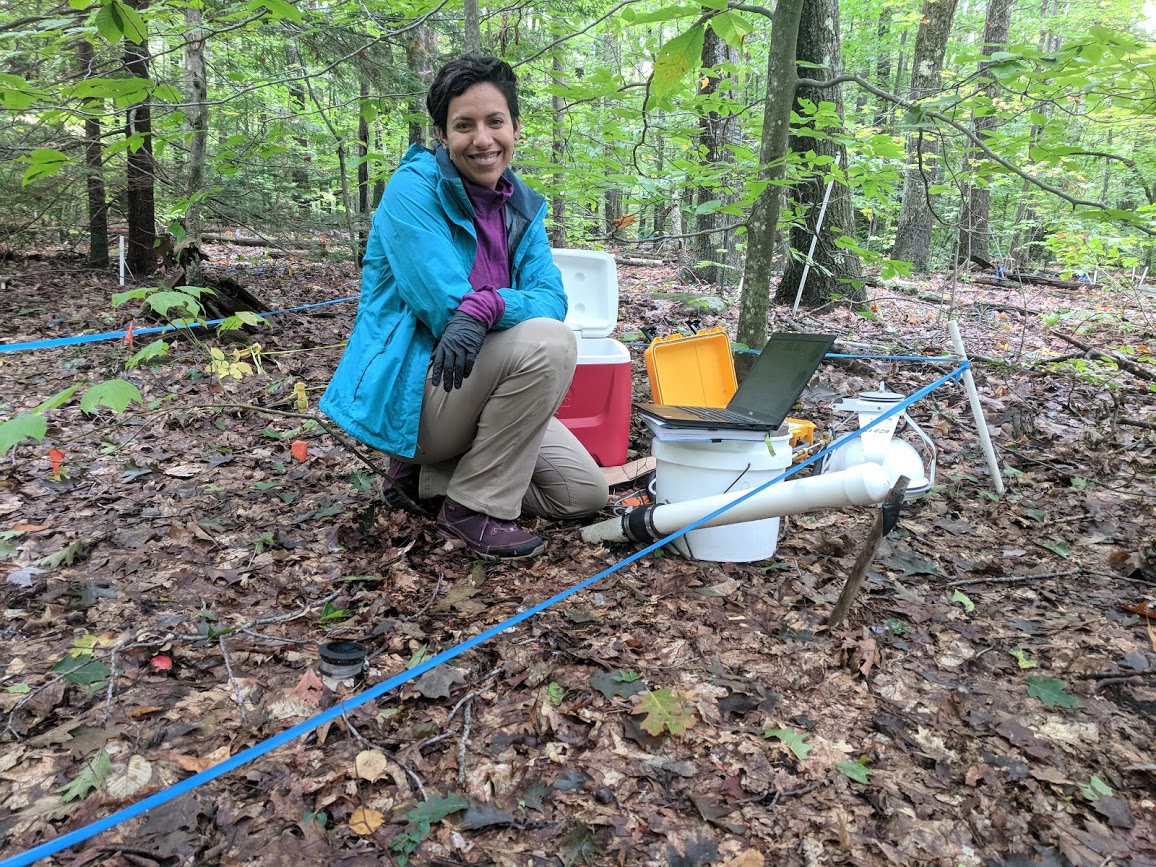 Adriana L. Romero-Olivares studies how fungi adapt to a changing climate. Here, she poses next to a chamber that captures volatile organic compounds (VOCs) as they are released by fungi on the forest floor.
JOVANI CATALÁN DIBENE

To see if these findings held true in the field, she traveled to Treseder’s long-term research site in the boreal forests of Alaska, manipulating conditions inside greenhouses to assess how warmer conditions changed the fungal community. Again, Romero-Olivares saw a tradeoff. As temperatures increased, fungi became stressed, shifting their energy toward basic metabolism and away from decomposition of organic material, thus weakening the flow of nitrogen to other species (Front Microbiol, 10:1914, 2019).

The nature of their decomposing changed, too. When stressed by rising temperatures, fungi broke down more recalcitrant carbon, a type that normally resists decomposition and remains locked in the ground. Even though decomposition decreased overall, which should theoretically reduce carbon emissions, warmer fungi’s swap to recalcitrant carbon could ultimately weaken soil’s ability to store carbon, Romero-Olivares says.

Her dissertation research, Treseder tells The Scientist, is “one of the first studies to explicitly test how microbes evolve in response to climate change. It’s almost a whole new field.” While previous research has focused on fungi’s immediate responses, Romero-Olivares takes an evolutionary perspective, assessing how such changes affect species over the long term. “She basically started that for fungi,” Treseder says.

After getting her PhD in 2017, Romero-Olivares started a postdoc at the University of New Hampshire, studying the genetics underlying fungal traits. She assessed the frequency of nitrogen uptake and decomposition genes in 879 fungal genomes and categorized the species using traits such as their functional group—whether they were pathogenic or plant symbionts, for example—their growth morphology, or the enzymatic pathways they use to drive decay. Climate change, her results suggest, will increase the abundance of fungal species with more nitrogen-uptake genes, such as yeasts and, significantly, animal pathogens.

Her use of many different approaches, from culturing microbes to mining big data, makes Romero-Olivares’s work particularly strong, says Camille Defrenne, an ecosystem ecologist at Oak Ridge National Laboratory who has not participated in Romero-Olivares’s research. “She’s a very complete scientist with a holistic view of how microbes respond to global change. She really represents the next generation of women in science.”

Romero-Olivares launched her lab at New Mexico State University last August. In addition to continuing her climate work, she’s also expanding into new territory in her own backyard. “While we know that deserts work in very different ways than other ecosystems, we don’t know what role fungi play,” she says. Beyond serving as the desert’s decomposers, “it’s an exciting challenge to figure out what else they might be up to.”