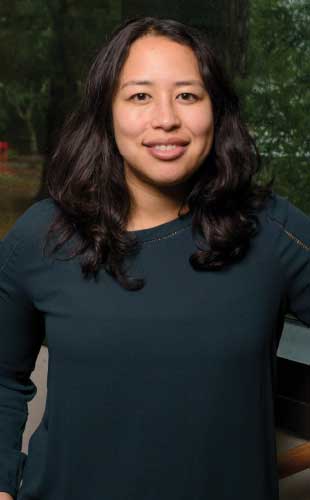 © CHRIS SCHMAUCH/WWW.GOODEYEPHOTOGRAPHY.COWhen Angela Brooks first saw Gattaca—a 1997 film about a futuristic society where humans are classified based on their genetic code—in high school, she was captivated by the possibilities hidden in the genome. “I’ve always been fascinated by the concept that every cell in your body has exactly the same DNA sequence but . . . can then have a different phenotype,” Brooks says.

She was particularly drawn to alternative splicing, the process through which multiple proteins emerge from a single gene. This became the focus of her PhD research at the University of California, Berkeley, where she investigated the proteins regulating alternative splicing in fruit flies. As a grad student, Brooks was also involved in a number of other projects, including modENCODE, which was aimed at creating an encyclopedia of all the functional elements in the Drosophila melanogaster and Caenorhabditis elegans genomes. Brooks also...

“She did some beautiful work,” says Steven Brenner, a computational genomicist at UC Berkeley and Brooks’s PhD advisor, referencing a major project in which Brooks discovered that a splicing factor’s regulatory map, which relates protein binding sites to their functions, is conserved between insects and mammals. “In order to do this, she developed new tools to be able to analyze RNA-seq, and was really an early person to harness that technology and show what its potential was.”

In 2012, PhD in hand, Brooks decided to pursue her passion for human genomics and do a postdoc in Matthew Meyerson’s cancer genomics lab at the Dana-Farber Cancer Institute and the Broad Institute in Boston. There, Brooks studied proteins involved in splicing and human cancers and identified the cancerous effects of mutations in two genes: U2AF1 in lung adenocarcinoma and acute myeloid leukemia2 and SF3B1 in chronic lymphocytic leukemia.3

During her postdoc, Brooks also collaborated with other Broad Institute researchers to develop a high-throughput phenotyping method called expression-based variant-impact phenotyping (eVIP), to identify mutations that lead to meaningful changes in gene expression.4 “In a lot of ways, I think her most significant impact was in methods development,” says Meyerson. “Both JuncBASE and eVIP are useful and powerful new methods.”

Brooks has continued to explore alternative splicing in her own lab at the University of California, Santa Cruz, which she set up in the summer of 2015. Brooks ultimately hopes to one day “be able to directly sequence every RNA molecule and all the RNA modifications in a cell so you actually know [its entire] transcriptional output.”

Beyond lab work, Brooks is also passionate about promoting diversity in research. “I think that’s another big goal [I have], to increase the diversity of the data we have, but also [to help] include scientists from diverse populations to study these genomes,” she says.