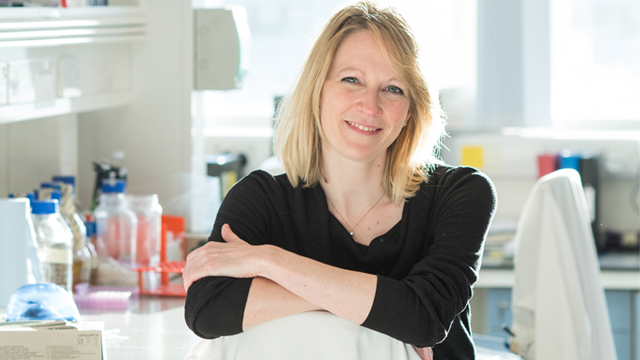 As a physiotherapist at University Hospital Zurich in the mid-2000s, Annina Schmid often encountered people with chronic pain. “My interest in research got sparked while I was seeing my patients,” she says. “It was very difficult to treat them, or to understand why pain persists in some people, while it doesn’t even occur in others.”

Schmid, who grew up in Switzerland, had earned her master’s degree in clinical physiotherapy in 2005 at Curtin University in Perth, Australia, and she was keen to return down under. In 2008, she secured an Endeavour Europe Scholarship from the Australian Government and moved to the University of Queensland in Brisbane for a PhD in neuroscience.

For her PhD, Schmid focused on animal models of mild nerve compression, also called entrapment neuropathy, in which pressure on nerve fibers—from bone, for example—can cause pain and loss of motor function. Using a tube to compress the sciatic nerves of rats, Schmid was able to replicate not only local symptoms seen in humans, but also inflammation at distant sites, a possible explanation for why patients often report pain in other parts of the body.1

By the time she earned her doctorate in 2011, Schmid says she was “hooked” on research. During a subsequent internship with Claudia Sommer at the University of Würzburg, Germany, Schmid processed skin biopsies from patients with the pain syndrome fibromyalgia, and found degeneration in small nerve fibers—a finding she says helped shape her future focus.2

Shortly afterward, Schmid began a postdoc with neurobiologist David Bennett at the University of Oxford’s Nuffield Department of Clinical Neurosciences (NDCN). “She’s always been a joy to work with,” says Bennett. “She’s got a nice way of thinking about interesting and important questions in neuropathic pain.”

Working on patients with carpal tunnel syndrome—a common entrapment neuropathy affecting the wrist—Schmid described reductions in small fiber density and showed that changes in nerve structure occurred even far away from the site of compression.3

In 2015, Schmid won an early career research grant from the International Association for the Study of Pain. Now an associate professor at NDCN, she continues to collaborate with Bennett to study nerve regeneration following compression. She also practices physiotherapy part-time and shares her expertise with students. “Her teaching is always very well received,” says Bennett. “She’s a very good communicator.”

Beyond the University of Oxford, Schmid teaches at Oxford Brookes University and leads international courses for physiotherapists with Tampin. “I’m quite passionate about trying to translate findings from research to clinicians,” Schmid says. “Physiotherapy is a profession that’s still very close to my heart.”