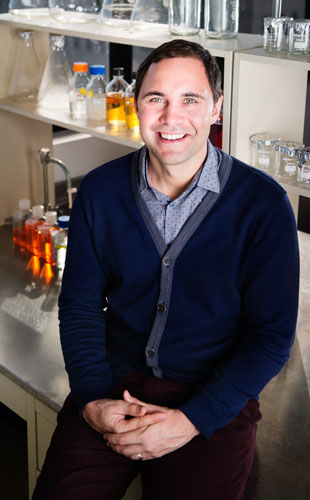 © LAURA BARISONZIMicrobiologist Benjamin tenOever wanted a fun way to get his microRNA-focused lab members interested in genes upregulated by interferons, proteins released by host cells under pathogenic attack. So he created Game of Clones. The single-elimination tournament, akin to a basketball bracket and broadcast over Twitter, pits two genetically altered flu viruses against one another to see which one fares better in a mouse. “It’s a little bit just for fun, but it also has a purpose,” says tenOever. “What Game of Clones has done is pulled [interferon-inducible] genes out of the woodwork.”

TenOever’s interest in interferons’ roles in infection goes back to his days at McGill University. During an undergraduate microbiology class, tenOever attended a lecture about viruses, which ignited his interest and set the course for his research trajectory. “It was one individual teacher who taught with such passion it was impossible not to fall...

He and another student in the lab teamed up to figure out that two kinases—IKKε and TANK-binding kinase 1 (TBK1)—flip the “on” switch in a viral host’s innate immunity by activating two interferon regulatory factors.1 “Even though [the paper] didn’t provide a lot of mechanistic details, it was the first concrete example to find out more in this pathway,” tenOever says.

For his postdoctoral work, tenOever wanted to focus on one of the kinases, IKKε. Unlike TBK1, which is present in high levels throughout infection, IKKε only appears later on. To understand why, tenOever needed a mouse model, so he headed to Harvard and the lab of molecular biologist Tom Maniatis. By generating a knockout mouse, tenOever produced evidence that IKKε acts like a switch to turn on a second line of defense against viral infection if the first wave of innate immune sentinels, activated by TBK1, can’t stop the invasion.2

Up until that point, everything tenOever touched had turned to gold. “He is a remarkable experimental scientist. He not only has a clear idea of what needs to be done in terms of experimental design and strategy, but he executes in the lab extremely well,” says Maniatis, now at Columbia University. “His experiments always work, which is rare.” But in 2007, tenOever moved to New York City to set up his own lab at Mount Sinai, and the next six years became “a roller-coaster ride,” he says.

As a new professor, tenOever decided to look at the role of microRNAs in the mammalian cellular response to viral infection. He threw his lab headlong into the project, but after $200,000 and a year of effort, “we did not have even one figure’s worth of data that was publishable, because everything was negative.” But tenOever did not despair. In fact, he has since spun gold out of straw.

Peter Palese, the chair of tenOever’s department, says his accomplishments are “extraordinary for someone of his age.” This fall, tenOever earned tenure, and he says his lab will continue to focus on viruses. “I still to this day love viruses; they’re the things I love the most.” As for the winner of Game of Clones? You can find out for yourself at twitter.com/virusninja.