ABOVE: Mark Stone, University of Washington

Chelsea Wood once imagined she’d study dolphins, so it was a surprise, she says, to realize “there were much more charismatic things living inside the dolphins.”

As an undergraduate at Dartmouth University, Wood worked alongside James Byers, an ecologist then at the University of New Hampshire, who encouraged her to study parasites. “I went to his lab like a little mercenary trying to get marine biology experience, having little to no interest in the parasites,” Wood says. But along the way, she recognized how beautiful the freeloading organisms could be. For her undergraduate thesis, Wood studied how infection with a parasitic flatworm (Cryptocotyle lingua) changed the grazing habits of the marine snail Littorina littorea, and how those effects rippled through the local ecosystem.

After earning her bachelor’s degree in 2006, Wood spent two years as an editor of Frontiers in Ecology and the Environment, where she realized that she most enjoyed reading papers about parasitology. She decided to pursue the topic for her graduate research.

Wood began her PhD at Stanford University’s Hopkins Marine Station in 2008, focusing on how fishing affects fish parasites. Studying communities off the coast of Chile and around the Line Islands, south of Hawaii, she showed that parasite assemblages largely track their hosts in abundance and diversity—in heavily fished areas, many parasites are, like their fish hosts, less abundant and diverse. However, certain parasites fared better than others. Species that spread through direct contact were more abundant than ones with complex, multi-host life cycles.

As Wood was completing her dissertation, her undergraduate work on  L. littorea caught the attention of Pieter Johnson, a disease ecologist at the University of Colorado Boulder who studies how parasites structure aquatic communities. It was rare to see work that looked holistically at multiple organisms, as Wood’s did, Johnson says. After meeting Wood at a conference, “I essentially headhunted her,” he tells The Scientist, encouraging Wood to join his lab for a postdoc. When she showed up in Boulder in 2013 and began working in new ecosystems, Johnson says, Wood “was just fearless,” attacking her research “like a dynamo.” Together, the two studied how aquatic bird diversity affects parasite diversity. Wood and Johnson added perches, nesting material, and bird decoys to attract a greater variety of bird species to some ponds while leaving others as controls; two years later, they looked at the parasites in each pond. As she’d observed in fish, more-diverse bird populations correlated with more-diverse parasites, but again, the effects were different across species.

After wrapping up her postdoc in 2014, Wood completed a fellowship at the University of Michigan, where she studied a group of flatworms called schistosomes that infect humans through a snail host and cause a disease called schistosomiasis. Wood used drones to search for areas where the snails’ preferred habitat—submerged water plants—bordered on human settlements in Senegal, helping to identify communities at the greatest risk of schistosomiasis outbreaks.

In 2016, Wood accepted a faculty position at the University of Washington, where she now runs her own parasite ecology lab. Several of her current initiatives involve historical ecology: delving into museum specimens and historical records to track parasites over time. Wood’s first publication using museum data followed a species of nematode worm (Clavinema mariae) infecting English sole (Parophrys vetulus) in the Puget Sound between 1930 and 2016 (J Appl Ecol, 56:190–200, 2019). During that time, she found, the number of nematodes per fish increased eightfold. Her ongoing work will reconstruct a broader assemblage of parasites that have infected 10 economically important fish species, including herring, hake, and rockfish, over the last century.

“There is an amazing treasure trove of information hidden away in our natural [history] museums,” Katrina Lohan, a parasite ecologist with the Smithsonian’s Environmental Research Center, tells The Scientist. Without historical data, researchers can only estimate how disease outbreaks might change in the future, says Lohan, who praises Wood’s creative method of using museum specimens to answer pressing questions. “I’m really excited to see what [she and her team] come up with,” Lohan says.

One of Wood’s current priorities is convincing societies around the globe to prevent parasite extinction. It’s not an easy sell, she concedes; most people’s interactions with parasites are unpleasant. To others, parasites are “not beautiful, they’re not cute, they’re not charismatic, but they . . . are vitally ecologically important,” Wood says. “If we want functioning ecosystems, we have to decide to conserve parasites.” 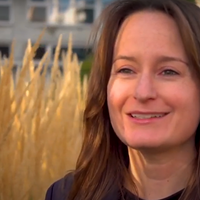