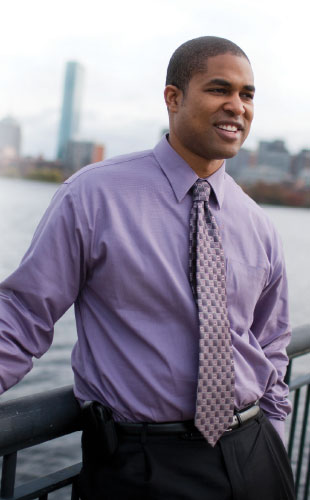 © DOMINICK REUTER—PHOTOJOURNALISTFrustrated by microbes that refused to grow during a 10-day visit to his Australian collaborators’ lab in 2012, Cullen Buie attended an emergency lunchtime meeting that ended up reshaping his research. The MIT engineer had wanted to use his team’s 3-D microfluidics tool to determine the effectiveness of bacteria for use in microbial fuel cells by analyzing the properties of their surface membranes. But the recalcitrant microbes left him “twiddling his thumbs.” Buie’s University of Queensland collaborators suggested giving him different E. coli strains to analyze. “They said, ‘Maybe you can distinguish pathogens from nonpathogens in your devices,’” Buie recalls. “We saw huge differences in their responses.” That result started his transition from fuel cells to a deeper focus on microbial physiology.

This detour brought Buie closer to his original intention to major in premed as an undergraduate, as his older sister had. But that early...

Deciding to stick with engineering, Buie did his PhD on microfluidic electro-osmotic pumps for fuel cells with Juan Santiago at Stanford University, finishing in 2009. He then landed a faculty job at MIT, but first took a postdoctoral post with Liwei Lin at the University of California, Berkeley, studying microbial fuel cells. There Buie used his PhD experience to manipulate bacteria, specializing in dielectrophoresis, Lin explains.

Buie continued to explore how electrical fields influence bacterial outer cellular envelopes, designing more-sensitive tools.1 Then, six months after he took up his MIT post, Buie’s 35-year-old sister died of sepsis. “It was mind-boggling to me that in 2010 people still died of bacterial infections,” Buie says.

After his Australian epiphany, Buie realized that his research might help prevent the same thing from happening to others. Going beyond E. coli, Buie and his MIT and Queensland colleagues showed that dielectrophoresis could distinguish phenotypes of particularly virulent Pseudomonas strains.2

His group then applied even stronger electric fields to open pores in cell envelopes, through which genetic material can be introduced. Tools for studying electroporation were severely lacking, Buie explains, and so the team devised a system for this purpose.3 “This could facilitate electroporation for microbes previously intractable to genetic manipulation,” Lin says.

Buie is also excited about his latest research, on which he collaborates with Peter Girguis at Harvard University.4 “More than 99 percent of bacteria have not been cultivated in the lab,” Buie observes. “One reason is that in the environment they’re almost always in communities. The standard microbiological technique is isolation. We developed nanoporous incubators where they’re physically isolated but chemically in a community.”

“Cullen’s uniquely poised to continue working with biologists solving these really large problems,” Girguis says. “I think his future career will be bright, as he’s one of the few engineers I’ve met who has the skills, but is also deeply interested in the questions.”