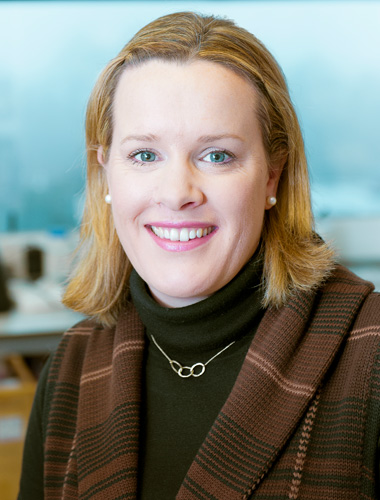 Geneticist Emmeline Hill grew up a horse girl. Her grandmother, Charmian Hill, was the first woman to ride against men in Ireland, earning her the title “galloping granny” in the family’s hometown in County Wexford. Charmian also bred horses, and owned the prizewinning Thoroughbred mare Dawn Run. Although granddaughter Hill was quite the rider herself, it was horse breeding that always captivated her. “Everyone knows that one horse can run faster than the other, and they ask, ‘Which one?’ I want to know, ‘Why?’”

As a postdoc under TCD’s Patrick Cunningham, who is now Chief Scientific Advisor to...

RESULTS: In 2004 Hill received a prestigious President of Ireland Young Researcher Award. The prize awarded her €1.2 million (then $1.5 million) in research funding over 5 years and enabled her to launch her own lab at University College Dublin (UCD) to pursue her passion: the genetics underlying racehorse success.

But Hill’s work didn’t really take off until she collaborated with other scientists to sequence the horse genome,2 which “transformed how we as horse geneticists can do our work,” she says. Even before the genome was complete, she began collecting equine blood samples door-to-door in County Wexford.

Hill met Jim Bolger, a local horse trainer and family friend, who offered his stable of some 100 horses for her research. Using those samples, she identified the first locus associated with Thoroughbred horse speed in the myostatin gene (MSTN), which affects the size of muscle cells. Horses that excelled at long-distance running carried the T/T polymorphism, C/C horses were the best short-distance sprinters, and those with a C/T combination won more middle-distance races.3

The findings meshed with Bolger’s experience, and he partnered with Hill and put up the capital to launch Equinome, a company dedicated to genetic testing of racehorses. This year is the first that Bolger himself will employ genetics to selectively breed and train horses to account for the contributions of the “sprinter” C allele and the long-distance T allele. “For me, the whole thing is a no-brainer,” he says. “I’m very interested in the science insofar as it lets me breed the type of horse I want to breed.”

DISCUSSION: Hill recently teamed up with exercise physiologist Lisa Katz at UCD’s veterinary college to do more precise equine genetics work, querying parameters beyond speed, such as muscle function and aerobic capacity. “We want to really characterize the defining traits of Thoroughbreds that have been selected for during the past 200 years,” Hill says.

She’s certainly moved beyond being simply a young girl in love with horses. “Emmeline has gone on to forge her own very distinct research,” says Cunningham. “Imagination without the ability to get down and do the work on its own is not enough, and she has all the necessary qualities.”