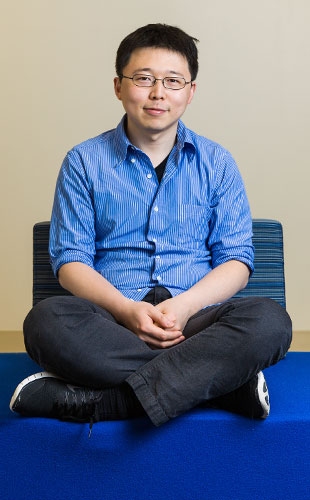 © PORTER GIFFORDAs a teen in Iowa, Feng Zhang spent five hours every weekday after school volunteering in a lab at the Human Gene Therapy Research Institute in Des Moines. Zhang remembers fondly the “crazy ideas” his mentor would come up with, like whether green fluorescent protein (GFP) could act as sunscreen (it absorbs UV light). Zhang purified GFP, slathered it onto a layer of DNA, and found that it did, in fact, prevent DNA damage.

Zhang’s project earned the first of many science fair top prizes, winnings that later helped pay his tuition at Harvard University. But despite his success in molecular biology, Zhang opted to major in chemistry and physics. “I wanted to get a solid foundation in areas of science that don’t change as quickly,” Zhang says. “The laws of physics and chemistry are pretty set. Molecular biology is changing every day.”

Other researchers had tried inserting light-sensitive ion channels into neurons to control their activity, but it was Zhang who optimized the system for mammalian cells.1 “That was just the beginning,” Deisseroth says. As a graduate student in his lab, Zhang went on to manipulate patterns of activity in neurons and see changes in behavior. Deisseroth says Zhang’s foundations in chemistry and physics were an asset. “He understands the root of what the problem is and not some indirect version. And he then designs the simplest, best, most brilliant solution.”

After graduate school, Zhang was introduced to genome engineering and set his sights on transcription activator–like effectors (TALEs) as a junior fellow at Harvard under the supervision of neuroscientist Paola Arlotta. Zhang devised a way to synthesize novel TALEs to use as a transcriptional activator in human cells.2 Arlotta says Zhang is an inventive problem solver and had the foresight to know that he had to develop TALE technology to be easy enough for any lab to use. “He has an ability to see the simplicity of things,” she says. “That’s a gift that not everybody has.”

Before long, the Broad Institute and the McGovern Institute for Brain Research, both at MIT, recruited Zhang to establish his own lab. A month into his new position, Zhang heard an infectious disease biologist talking about CRISPR, part of an innate immune system in bacteria. Thinking it was interesting, Zhang looked it up on Wikipedia. A few groups had already begun to take advantage of CRISPR to target precise regions of the genome, but had not developed a tool for tweaking human genomes. In short order, Zhang streamlined CRISPR and got it to work in human cells,3 an achievement that has since ushered in numerous advances and applications in genome editing.

This spring, Zhang celebrated the graduation of four of his PhD students. And earlier in the year, he was part of a group awarded the first US patent for CRISPR. He says the patent serves to ensure that research groups will have easy access to the technology, and that no single entity will have ownership. He’s also made a wealth of CRISPR resources freely available online. “Tools like optogenetics and CRISPR, they’re such foundational tools,” Zhang says, “that if you make them proprietary, you’ll hinder the progress of science.” 