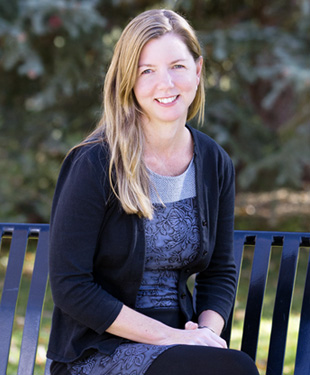 © REBECCA STUMPFAfter a childhood spent moving about the U.S., Gia Voeltz left her teenage home of Binghamton, New York, for the West Coast to start her undergraduate studies. Three years later, as a senior at the University of California (UC), Santa Cruz in 1993, she discovered her passion for lab research while studying RNA splicing under Manuel Ares.

In 1995, Voeltz moved to Yale University for a PhD in Joan Steitz’s lab. Using Xenopus egg extracts, she was able to show that posttranslational RNA decay was turned on in sequential steps during early frog development. Voeltz also discovered a new poly(A) binding protein, called ePAB, which regulates translation.1

As a PhD student, Voeltz attended a talk at Yale by cell biologist Tom Rapoport of Harvard University. At the end of the talk, Rapoport mentioned a new project to study how organelles form. “How can...

Rapoport took her on as a postdoc in 2001 to work on endoplasmic reticulum (ER) formation. After a few false starts—“I basically purified salt for three years”—Voeltz discovered the key role of a reticulon protein in shaping the structure of the tubular ER.2 She induced membrane vesicles from Xenopus egg extracts to form a tubular ER network, and while looking for the underlying molecular mechanism, she found a nonspecific inhibitor that could stop the reaction at low concentrations. When Voeltz tagged the inhibitor, she observed it binding to a reticulon. The study redefined the role of the protein family, which was previously thought to regulate axon formation in neurons.

Voeltz moved to the University of Colorado, Boulder, in 2006, planning to continue studying how reticulons dictated ER shape. She quickly deviated, however, after observing the 3-D structure of ER in yeast cells extending like a spiderweb throughout the cell. “It’s all over the place,” says Voeltz. “We pretty much had to solve the structure of all of the other organelles around it to figure out what was ER and what was something else.”3

When her team imaged multiple organelles at the same time, Voeltz saw ER tubules constricting mitochondria like lassoes. “It was literally a picture that got us thinking that might be where the mitochondrial division assembles,” she says. Voeltz’s team, working with researchers from UC Davis, demonstrated that the ER regulates the position of mitochondrial division.4 “Some people, you start a collaboration and there can be some tension with them,” says Jodi Nunnari, a UC Davis cell biologist who’s worked with Voeltz. “That never happened with Gia. It’s pretty amazing.”

Now, Voeltz is focusing on the functional aspects of contact sites between the ER, mitochondria, and endosomes, as well as exploring the ways viruses might interact with the ER. “Organelles have been studied for years and all of a sudden you have these contact sites. For a cell biologist, that’s exciting,” says Voeltz. “You can take machinery from the ER and the mitochondria, and now you can do something that neither organelle can do by itself. That’s what we’re trying to uncover.”