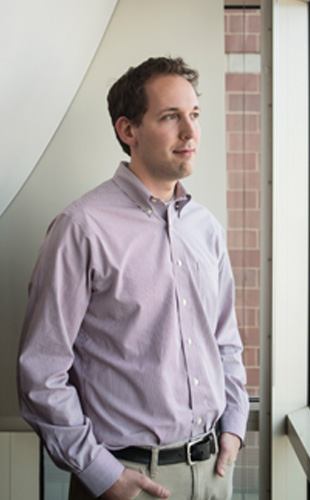 © DUSTIN FENSTERMACHERGrowing up outside of Buffalo, New York, Gregory Sonnenberg liked to catch tadpoles and watch them develop in glass jars. “It wasn’t always successful,” he admits. “There was a lot of trial and error.” But that early interest in experimental biology metamorphosed into something more serious, and in 2003 Sonnenberg started college at the State University of New York at Buffalo to study biomedical science.

Interested in medicine, Sonnenberg volunteered at a local hospital, but he was also accepted into the lab of microbiologist Philip LoVerde, where, between classes, he studied host-parasite interactions. By the end of his first year, the two parallel experiences made Sonnenberg realize that his talents were better utilized in biomedical research than in the clinic.

METHODS: Later in his undergraduate career, Sonnenberg joined the lab of cancer immunologist Richard Bankert, who encouraged him to pursue independent projects. “That’s when I really...

Engrafting pieces of human lung and ovarian tumors into mice, Sonnenberg showed that tumor-associated lymphocytes remained functional and responsive to cytokines.1 The resulting model “laid the foundation for evaluating immune and chemotherapeutic approaches to these two cancers,” says Bankert.

RESULTS: In 2007, Sonnenberg signed up for the graduate immunology program at the University of Pennsylvania (Penn). He eventually joined David Artis’s lab to explore the molecular mechanics of immunity and inflammation at mucosal barrier surfaces such as those of the gut and lungs. He identified a particular subpopulation of innate lymphoid cells (ILCs) in the intestines of mice and humans that produce the cytokine interleukin-22 (IL-22), a key mediator of immunity to gut infection. In mice infected with a bacterial pathogen, immunity was impaired when these ILCs were depleted.2

The culmination of Sonnenberg’s PhD work came last year, when he showed that IL-22–producing ILCs act like gatekeepers, retaining certain types of commensal bacteria in the gut. In mice with depleted ILCs, Alcaligenes bacteria—several species that reside in lymphoid tissues in the intestines of healthy humans—spread beyond their normal niches to the liver and spleen, triggering an immune response that results in chronic inflammation.3 Immune responses to Alcaligenes bacteria have since been implicated in human inflammatory bowel disease, and altered ILC responses have been observed in patients with several other chronic inflammatory diseases.

DISCUSSION: The findings suggest ILCs and the cytokines they secrete selectively regulate the host–commensal bacteria relationship, and that this pathway may be a therapeutic target for chronic inflammatory diseases. “It was remarkable to watch Greg develop such an exciting area of research,” says Artis, who describes Sonnenberg as “extremely creative, intellectually gifted, and highly motivated.”

Late last year, Sonnenberg won a National Institutes of Health Director’s Early Independence Award, allowing him to start his own lab at Penn, where he continues to investigate the role of ILCs in the regulation of host-commensal relationships and of the disruption of that function in chronic inflammatory diseases.