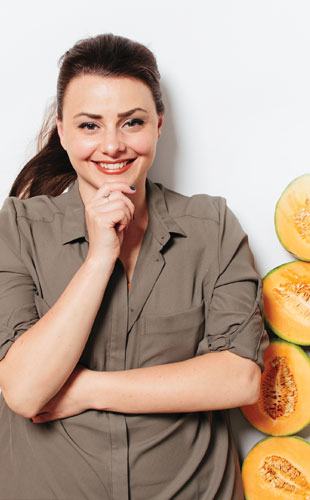 WWW.BRIANPOWELL.INFOMicrobiologist Haley Oliver started out at the University of Wyoming as an agriculture communications major, but she quickly found the field “too arbitrary.”

“I decided there were too many correct answers for some of the questions,” she says. Microbiology, on the other hand, felt like a perfect fit. “It was the hardest class I’d ever taken, and I loved it,” she recalls.

Knowing she wanted to go into food microbiology, she took on an undergraduate research project in the lab of Wyoming molecular biologist Kurt Miller, who studies the food-borne pathogen Listeria. At the same time, Oliver became a teaching assistant for a meat-evaluation course that assembled teams of students to travel to intercollegiate meat-judging competitions and assess the type and quality of beef, pork, and lamb from cuts of meat and whole carcasses. Though it was a bit far afield from her work on Listeria,...

After graduating, Oliver joined the lab of Kathryn Boor at Cornell University, where she delved into the stress responses of L. monocytogenes lineages for her PhD research. “I wanted to know if Listeria strains from different lineages had different abilities to survive stress and different abilities to cause disease,” she says. Sure enough, they do: Oliver and Boor found that strains had dramatically different virulence levels and responses to stress.1

“[Oliver’s] work clearly illustrates the range of diversity in bacterial responses to environmental conditions across one species,” says Boor. “That really shifts the paradigm with regard to the way we think about our ability to extrapolate our findings from one strain.”

Then, in collaboration with Martin Wiedmann, Boor’s husband and Cornell colleague, Oliver applied RNA sequencing to L. monocytogenes. It wasn’t easy, she admits, having few “benchmarks on how to analyze the data or even represent the data.” But the hard work paid off. Oliver and her colleagues were the sixth group ever to publish findings that used RNA-seq in a bacterial or prokaryotic model.2 “She was truly a leader there, not only in terms of the laboratory but the greater scientific community,” says Boor.

As a postdoc in Wiedmann’s lab, Oliver jumped at the opportunity to study food-borne pathogens in a more applied setting: the retail world. This is where her experience in the meat industry came in handy. Oliver convinced more than 100 “more progressive” retailers across eight different states to let her investigate the problem of food contamination, and they found plenty of Listeria.

“She has a great combination of being a good scientist but also having the organizational and personal skills to pull it all together,” says Wiedmann.

In her own lab at Purdue University, Oliver studies the spread of Listeria in other foods, such as melons, and investigates sanitation strategies that may limit contamination and increase food shelf life. Her lab also continues to explore the transcriptomes of various food-borne pathogens. Recently, for example, Oliver’s PhD student Aaron Pleitner documented the transcriptional profile of Listeria after exposure to chlorine dioxide, an increasingly common vegetable and fruit sanitizer.3