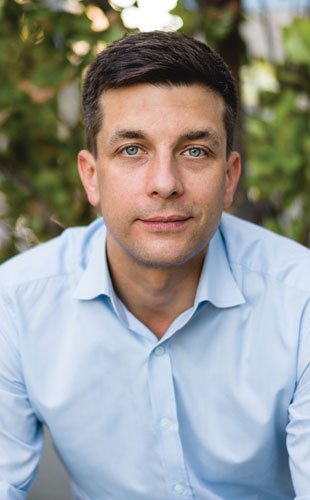 © STEFAN FUERTBAUERWhen Harald Janovjak filed his first patent describing the cell growth–regulating receptors he had engineered to be activated by light, he stumbled upon his great-grandfather’s 1920 patent for a device that projected color onto movie screens. Janovjak comes from an impressive line of engineers stretching back four generations. But he says he was pleasantly surprised to find that nearly a century later, “we’re still tinkering with light-based things.”

As a child growing up in Switzerland, Janovjak was always building things with his father. “We would inherit bicycles from my uncles or my older cousins, and we would take them apart and modify them.” The acumen he developed for disassembling things, tweaking them, and putting them back together has served him well as a synthetic physiologist.

Janovjak embarked on a career in science as a third-year undergraduate at the University of Basel, after a survey course in...

Janovjak’s drive as a graduate student impressed Müller, who is now at ETH Zurich. “He was really burning for what he was doing; it was incredible,” says Müller. “He never stopped thinking about the science.” Janovjak’s graduate work centered on developing methods to better understand how membrane proteins fold and stabilize. To study protein dynamics, “We had to do quite a bit of method development,” Janovjak recalls. In one of the ten papers Janovjak published during his two and a half years in graduate school, he characterized the energy necessary to stabilize a bacteriorhodopsin protein by assessing the amount of force it takes to break it apart.1

In 2006, Janovjak moved stateside to do a postdoc in the University of California, Berkeley, lab of Ehud Isacoff. By combining genetic components from viruses, bacteria, and rodents, the two engineered a “Frankenstein” version of a light-controlled excitatory glutamate receptor, but with a twist: they converted it into an inhibitory receptor, making it suppress, rather than excite, neuronal activity.2

Harald was “the kind of person you want to have as a postdoc,” says Isacoff. “Smart and disciplined and not afraid of anything.”

As a principal investigator at the Institute of Science and Technology Austria in Klosterneuburg, Janovjak has developed methods aimed at commandeering cell growth using light.3 His group is taking cells that aren't light responsive and reengineering them to grow using light-activated growth receptors. While the possibilities are vast, he aims to apply this technology to regenerate specific cell populations in diseases caused by cell death, such as type 1 diabetes and Parkinson’s.

Janovjak recently accepted a position at the Australian Regenerative Medicine Institute at Monash University, where he will move this December. “We think we have an amazing environment for our work,” he says. “The goal has to be that we keep pushing this until we end up with something that is to the benefit of people.”