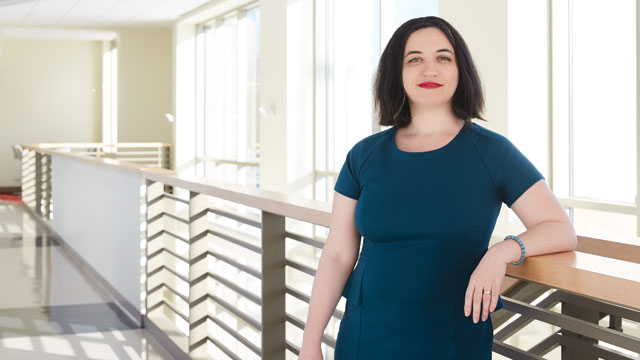 Ilana Chefetz isn’t someone who backs down from a challenge. During her mandatory service in the Israeli military police back in 1997, a male colleague working with her to investigate a motorbike theft opined that young women were not cut out to do police work. Chefetz remembers thinking, “I have to prove to this guy that girls can also arrest people and do whatever job is necessary.” So when the pair finally tracked down the suspect, Chefetz jumped out of the car, grabbed the thief, and restrained him until more officers arrived.

Nowadays, Chefetz brings that same tenacity to her research. Although her current work is focused on identifying novel methods for treating ovarian cancer, this topic was far from Chefetz’s mind while earning her bachelor’s at Technion, the Israel Institute of Technology in Haifa. While looking for a “practical” subject with solid job prospects, Chefetz...

Chefetz stayed at the Israeli Institute of Technology for her PhD, but decided to switch to more clinically oriented research and joined dermatologist Eli Sprecher’s lab to study familial tumoral calcinosis (FTC). At the time, researchers knew there was a genetic basis for the rare disease, which results in debilitating, tumor-like deposits of calcified phosphate in soft tissue, but the causative mutations had not yet been identified. By screening relatives of patients with FTC, Chefetz and Sprecher discovered that the condition was linked to mutations in SAMD9, a gene potentially involved in injury-associated inflammation.1

Motivated in part by a family history of cancer, Chefetz began studying cancer stem cells in 2009 as a postdoc at Yale University with Gil Mor, a reproductive sciences professor who focuses on ovarian cancer. At the time, the idea that stem cells were present in tumors was still new, Mor says, but the fact that Chefetz had come from another field allowed her to generate “all sorts of innovative ideas and a different perception of [cancer].” In one study, she discovered that inhibiting Aurora-A kinase, an enzyme involved in healthy cell proliferation that is often overexpressed in tumors, could decrease the spread of ovarian cancer in vitro.2 In another project, she found that the transcription factor TWIST1, which regulates aspects of embryonic development, is constitutively degraded in human cancer cells.3

After her postdoc, Chefetz moved to the University of Michigan to work as a research fellow with oncologist Ron Buckanovich. There, in a quest to develop targeted therapies for ovarian cancer, she began studying necroptosis, a form of programmed cell death. “We used to think . . . necroptosis happens due to injury, ischemia, inflammation, and so on,” Chefetz says. But recently, she adds, scientists realized that this process could also happen in a regulated manner—allowing researchers to probe this pathway to identify novel ways to combat cancer. “We would like to accelerate necroptosis to kill as many cancer stem cells [as possible],” she says. “I’m trying to learn all the downstream targets and find what inhibitors we can combine . . . to accelerate cell death.”

Chefetz is continuing her search for necroptosis-based targeted therapies for ovarian cancer at the University of Minnesota, where she accepted an assistant professorship last year. “Ilana has taken a really creative approach [to fighting cancer],” says Costas Lyssiotis, a biochemist at the University of Michigan and one of Chefetz’s collaborators.

Currently, she is investigating how inhibiting aldehyde dehydrogenase can kill ovarian cancer stem cells by inducing necroptosis. According to Mor, Chefetz’s research is “really going to change the way we understand this disease.”