Asked what initially drew her to science, Izzy Jayasinghe has a modest answer. “I wasn’t very good at very many other things in school,” she says. “And I had, I guess, a general curiosity.” While in high school in New Zealand, Jayasinghe built a viscoelastic damper, a type of shock absorber used in cars and in buildings in earthquake-prone areas, and tested how various design parameters affected its performance.

The project won an award at a science fair for the city of Auckland, with a prize of a small scholarship to the University of Auckland, where she studied biomedicine beginning in 2003. During her senior year, Jayasinghe worked in the lab of biophysicist Christian Soeller, using a confocal microscope to examine the positions of proteins known as sodium-calcium exchangers in heart cells. Previous research had produced conflicting results on whether these exchangers colocalized with another type of protein known as ryanodine receptors. By eliminating some of the resolution-limiting optical effects, Jayasinghe and her colleagues found that the sodium-calcium exchangers were located both inside and outside clusters of ryanodine receptors. “It was a really nice challenge in the sense that it was a good chance to understand and push the capabilities of the instrument that we were using. . . . It was really exciting,” she says. 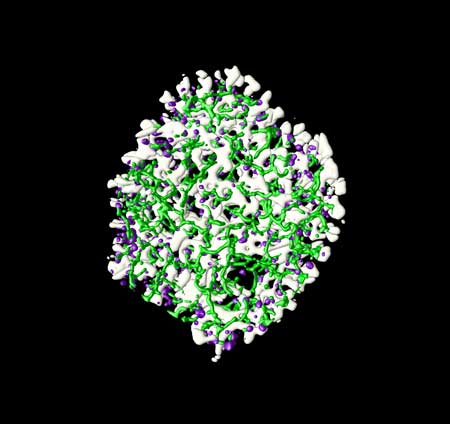 Jayasinghe stayed in Soeller’s lab for her PhD research, focusing more on the heart’s ryanodine receptors. These receptors, which control calcium flow within cells, are crucial to the proper functioning of brain, heart, and skeletal muscles, and many disease-causing mutations have been linked to ryanodine receptor dysfunction. Using super-resolution microscopy—a family of techniques that relies on sophisticated optics and visualization tools to image structures as small as single proteins—the group found that the distribution of ryanodine receptors in heart tissues was different from what had previously been indicated via electron microscopy, which missed smaller clusters of the proteins in cells. “There was a lot more in places that we didn’t expect,” Jayasinghe explains, adding that the study was an important step toward better understanding the receptors and their organization.

After graduating in 2011, Jayasinghe did a two-year postdoc at the University of Queensland in Australia, where she took a break from heart tissue, if not from super-resolution microscopy. She devised a protocol for imaging skeletal muscle in humans, rodents, and amphibians. One of the insights to come out of the work was that, unlike in mammalian muscles, tiny compartments in amphibian muscles swell or shrink when exposed to fluid with different salt concentrations.

Following her time in Australia, Jayasinghe began a postdoc in Soeller’s lab, which he’d recently moved to the University of Exeter in the UK. It was an appealing opportunity, she says, because it involved “learning how to build optical microscopes, learning how to plan and carry out experiments from beginning to end—not just develop[ing] the methods to allow it.” Using a technique called DNA-PAINT, which labels target molecules with a fluorophore-bearing oligonucleotide, Jayasinghe and her colleagues were able to pinpoint individual ryanodine receptors and see how they were organized in clusters with other proteins. The clustering arrangements varied significantly, revealing new complexity in how intracellular calcium flow is regulated.

Jayasinghe joined the faculty at the University of Leeds in 2015. There, she returned to looking at protein organization in diseased hearts using techniques she was familiar with, while also exploring new methods such as expansion microscopy, in which hydrogel is used to inflate a sample so that its subcellular structures can be seen in higher resolution. Using the technique, Jayasinghe and her colleagues determined how clusters of ryanodine proteins deteriorated in one type of heart failure.

After four years at Leeds, Jayasinghe secured a fellowship to develop new methods, rather than focusing on cardiovascular research. She used the funding to move to the University of Sheffield in the spring of 2020. “We’re delighted that she wanted to come here,” says Mike Williamson, the head of Sheffield’s Department of Molecular Biology and Biotechnology. Jayasinghe has, he explains, “a very interdisciplinary set of skills,” with experience in physiology, physics, and molecular biology. “It’s very unusual to find one person doing all of those things together.”

Jayasinghe is currently working to expand the availability of super-resolution techniques. “There’s a lot of uptake in molecular and cell biology, but very little, by comparison, in biomedical or clinical or environmental science,” she says. “If the techniques or the tools were cheaper and potentially more portable, it would spark more uptake.” One project she’s worked on involves labeling proteins with durable nanosize diamonds, which, unlike other labels, can’t be destroyed by intense light.

“She’s very good at explaining her research,” says Alice Pyne, who studies single-molecule imaging techniques at Sheffield. “So when we talk in groups with students, it’s always at the level where it’s accessible to everyone.” Pyne adds that Jayasinghe is “one of those people that goes, ‘Your successes are my successes, how can I lift up others around me?’ And I think we could all do with a lot more of those sort of people around.”