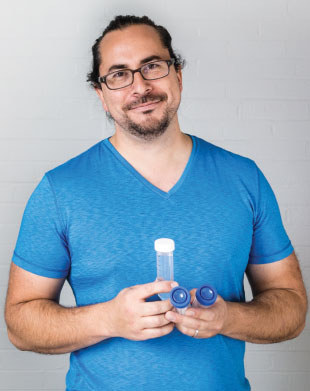 © HEATHER PERRYAs a graduate student in the field of olfactory neuroscience, conducting what his former mentor describes as ambitiously clever research, Jason Castro felt something was missing. “I wanted to use science to make a connection with people,” he says, not just to churn out results.

In 2012, the 34-year-old Castro accepted a faculty position at Bates College, a small liberal arts school in Maine, in order to “do the science equivalent of running a mom-and-pop—a small operation, working closely with students, and staying close to the data and the experiments myself,” he says. Students who passed through his lab or his seminars recall Castro as a dedicated mentor. “He spent hours with me just teaching me how to code,” recalled Torben Noto, a former student who went on to earn a PhD in neuroscience.

After he arrived at Bates, Castro, along with two computational scientists, enlisted...

Castro launched another project a few months later, when a paper published in Science reported that humans could discriminate between at least a trillion different odors. A friend from grad school, Rick Gerkin, smelled something fishy about the findings and gave Castro a call. “We became obsessed with the topic,” says Gerkin, now at Arizona State University. The researchers spent almost two years pulling apart the statistical methods of the study, finding that little tweaks to parameters such as the number of test subjects created large swings in the final estimate—a sign that the results were not robust.2 This August, the original study’s authors published a correction in Science.

Nathan Urban, Castro’s graduate advisor at the University of Pittsburgh, says Castro is driven by fundamental questions. As Gerkin put it, “If you sit down and have a beer with him, you’re going to be talking about higher-level ideas in human cognition.” Castro has more formally pursued the philosophical nuances of olfaction, as well. He coauthored a 2014 paper with a colleague in the philosophy department, weaving detailed neuroscience into phenomenological argumentation, arriving at a fundamental, if speculative, point: odors are perceived as “objects,” much like visual or tactile objects, and are organized in the brain according to their ecological significance.3

In setting up shop at a small college, Castro did not sacrifice scientific ambition. Last spring, he received a National Science Foundation Faculty Early Career Development Grant, a recognition usually awarded to researchers at larger universities. Because his work has a “computational front end,” plumbing data sets available online, Castro says he doesn’t need a university’s deep pockets to fund data-gathering of his own. “I’m certainly able to do the science I want to do.”

The influx of federal money will fund a project to mine data from the Allen Brain Atlas, a map of gene expression in the mouse brain, to address more fundamental questions regarding olfaction. He is exploring, for example, the possibility that our sense of smell is actually an amalgam of many sensory channels tailored to specific purposes. With so much data at his fingertips, Castro says, “I’m only limited by how creative an analysis I might want to try.”