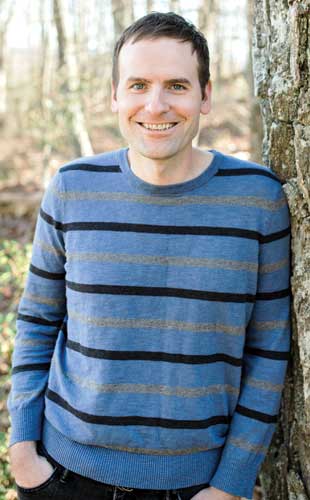 © MEGHANN CHAPMANJason Holliday earned his undergraduate degree from the University of Victoria in British Columbia, where he worked on sea urchins and chicken embryos in a developmental biology lab. He then headed to Stanford University as a research assistant in a cell imaging lab studying signal transduction in mammalian cells. But when it came time for grad school, Holliday was ready for a change. He was interested in ecological genetics, and he knew that trees are key species in many ecosystems. He also knew there was funding for tree research. So he decided to visit the University of British Columbia’s Sally Aitken, who studied tree evolution.

“I was just very impressed,” Aitken says of her first visit with Holliday. “He’s clearly very smart and also very personable.” Even before he officially joined Aitken’s group, Holliday was out collecting samples for a project on how spruce trees...

Shortly after Holliday joined the lab, the group and its collaborators landed funding from Genome Canada to expand their study of spruce genetics. Holliday looked at gene expression levels in Sitka spruce plants grown from seeds gathered from trees throughout the species’ natural range to study growth patterns and the trees’ ability to withstand freezing. “Local populations need to appropriately time these transitions, as they can’t both grow and be substantially cold-hardy at the same time,” Holliday says.

He also compared single-nucleotide polymorphisms (SNPs) in candidate genes, such as those that influence cold hardiness, and the timing and rate of growth in the spring. Holliday and his colleagues identified signals of local adaptation as well as clear signs of multiple genetic bottlenecks. It appeared that spruce had migrated out of the Seattle area in a series of postglacial jumps northward to Alaska, growing new populations from a relatively small number of seeds each time.1 “With every dispersal and with every colonization you get a bottleneck [and] lose variation,” Holliday explains.

According to Aitken, Holliday’s work helped launch the $3.5 million AdapTree Project, which Aitken coleads with Andreas Hamann of the University of Alberta. The project, funded by Genome Canada, aims to document the genetic basis of climate adaptation. “The work that Jason did in my group, with others involved, that was really the proof of concept for the AdapTree project,” Aitken says.

“His work was among the very best in the world at that point in time,” says University of California, Davis, forest geneticist David Neale. “It was broad; it was comprehensive; it was carefully done.”

In 2009, before he’d even gotten his PhD, Virginia Tech offered Holliday a faculty position. Two years later, he was awarded an Early Career Grant from the National Science Foundation to launch a genomic interrogation of the black cottonwood tree (Populus trichocarpa). Now, in collaboration with Neale and others, Holliday studies genetic variation along both latitudinal and altitudinal transects. His team is also examining the genetic mechanisms that underlie the tree’s switch from growth to dormancy, which can be triggered by day length, nutrient limitation, and other factors.2

For this work, he has pioneered the use of sequence-capture technology, which employs 200,000 unique RNA probes for a total of more than 40,000 black cottonwood genes3—and he encouraged Aitken and her colleagues to use it in their AdapTree work. “That proved to be an excellent decision,” Aitken says. “It was key to the success of that project.”