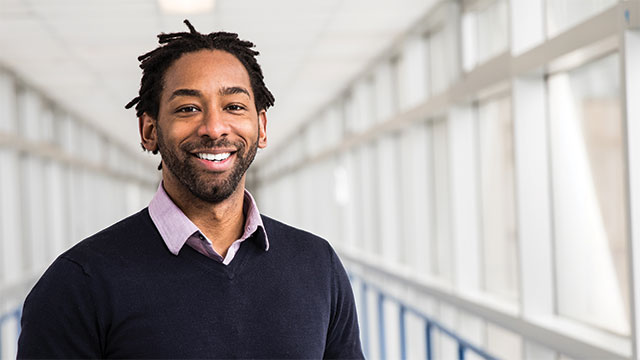 Jermaine Jones’s first memory of being a “bit of a scientist” was discovering that toilet water is actually pretty clean. While conducting a science fair pro-ject during his junior year of high school in Virginia, he learned that “you get much more varied bacteria from the toilet seat as opposed to the water,” he explains.

With encouragement from his aunt, who was a biologist, Jones chose to pursue a degree in science at the University of Virginia. Over the course of several undergraduate internships, he got a taste of different fields of research, from probing decision making in mice to examining the analgesic effects of rainforest plant extracts in Brazil. By the time Jones had earned his master’s degree from Old Dominion University, he was certain that investigating drug abuse would be a good fit for his two main interests, pharmacology and...

For his PhD, Jones moved to Washington, D.C., where he worked on elucidating the neurobiological mechanisms of cocaine’s aversive effects in rodent models with Anthony Riley, a behavioral pharmacologist at American University. At the same time, Jones examined the effects of knocking out genes encoding the neurotransmitter transporters that the drug acts upon in mice with neuroscientists George Uhl and Scott Hall at the National Institute on Drug Abuse. For his dissertation, “he was able to show, pretty unequivocally, the role of neuro-transmitter systems in the aversive effects of cocaine in these mice,” Riley recalls.1

Riley describes Jones as a meticulous, dedicated, and focused researcher. “What I liked best about Jermaine,” he adds, “was that his long-term goal was [to do] translational work with humans with drug addiction.”

In Comer’s lab, Jones worked on a range of studies, including an inpatient investigation demonstrating the efficacy of a buprenorphine/naloxone treatment for managing chronic pain2 and an analysis that quantified how brief educational training could help heroin users accurately identify an opioid overdose.3 He also cowrote a review on the effects of combined opioid and benzodiazepine use.4 “He really took the lead on that,” Comer says.

Jones became an assistant professor at Columbia in 2011, and his next goal is to explore the role of genetics in substance use disorders and the medications to treat them. He is currently examining how genetic variance alters the effectiveness of naltrexone in treating methamphetamine abuse.

Beyond teaching at the college level, Jones also participates in a program that encourages minority graduate and medical students to pursue research careers. “The students that he’s worked with now have done really, really well in the program,” Comer says.

Looking back, Jones is pleased that he made the move into clinical research. “I’ve learned so much just from sitting and [talking] with individuals, because oftentimes they’ll tell you you’re asking the wrong question,” he says. “That really shapes you as an investigator.”